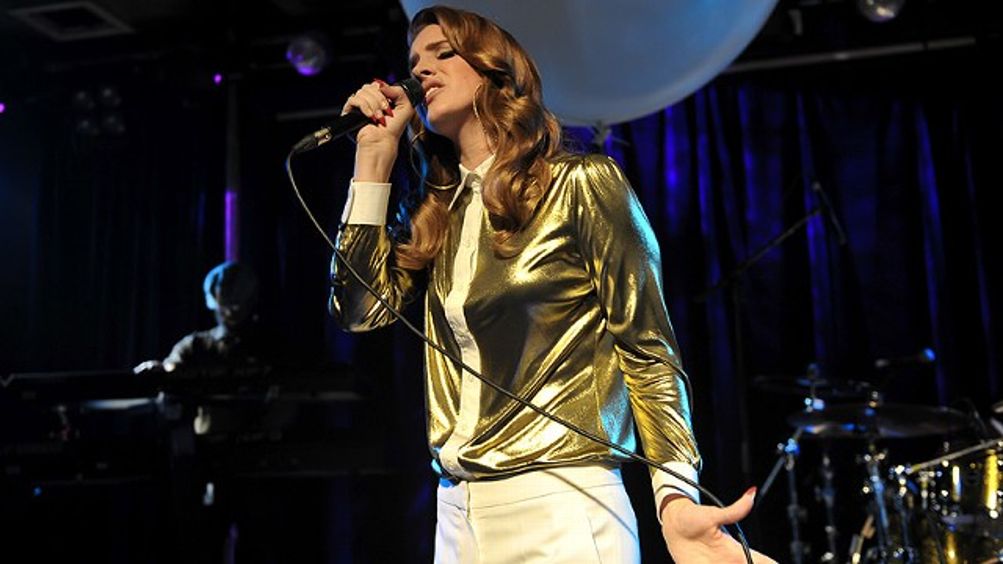 So go figure — Lana Del Rey turned out to be not exactly the DIY up-from-nowhere straight-out-the-Lynchian-trailer-park untouched-by-human-marketing self-created computer-ghost we all thought we were falling in love with. But it was fun while it lasted, right? I don’t know about you, but I really enjoyed letting myself imagine someone sitting in a room and auteuring “Video Games” all by her slurry, sultry, duck-lipped lonesome. When I say “Video Games” I’m talking about the song, an alluringly bereft ballad of sexual dependency. But I’m really talking about the chillwave-y dream of a video that brought it to life, the one Del Rey supposedly made on her laptop with found footage from YouTube — old Hollywood, old Vegas, Super 8 skateboard flicks, cartoons, flowers, Paz de la Huerta eating it on the driveway of the Chateau Marmont. It felt like a triumphant mainstream breakthrough for the horny/nostalgic magpie aesthetic of Tumblr (I know, finally, right?) and the most fully realized self-proclamation-through-collage clip by an artist no one had ever heard of since this. Taken as a single work, the video and the song are pretty much a perfect art-object, commanding and deeply personal; it was almost hard to imagine someone just parachuting into the pop world with her curatorial game this tight.

As it turned out, she kinda had and she kinda hadn’t. It was complicated! She started doing interviews, in which she mostly came off like a glitchy Lana Del Rey chatbot (the Uncanny Valley Girl!) and the discovery phase of her trial-by-blog began. Crucial prosecution exhibit: A 2010 album, produced by David Kahne of Sugar Ray infamy, credited to “Lana Del Ray1 AKA Lizzy Grant,” released to zero fanfare two years after it was recorded, yanked from iTunes just two months later by her management, in order to clear the decks for a better, faster, video-gamier Lana to come. Old Lizzy/Lana press clips came to light, like the one where she blithely told a British webzine that she’d adopted the Lana handle on the advice of “a series of managers and lawyers over the last 5 years who wanted a name that they thought better fit the sound of the music,” and that rave review of the first record from the domain-name-industry trade publication DN Journal; Lizzy’s dad, it turned out, was an accomplished domain-name investor, a piece of totally unremarkable news that a growing chorus of LDR skeptics chose to be disappointed by anyway, as if “Video Games” had somehow led them to believe Del Rey’s father was an astronaut or a talking pillar of fire.

“When the T.R.A.F.F.I.C. conference was in New York in September,” that one noted, “Lizzy popped in at the evening events to say hi to her many friends in the domain industry.” As suppressed backstory goes, none of this seemed to indicate consumer fraud on the James Frey/Vanilla Ice level, but it was less interesting than the mystery, and cumulatively it looked an awful lot like the kind of data-wake people generate when they’ve spent a considerable amount of time and effort and (everybody assumed, whether or not it was true) family money trying to catch the eye of mainstream entertainment-industry gatekeepers. And one thing we tend to demand of our totally up-from-nowhere viral phenoms is that they not turn out to have spent time networking during cocktail hour at something called “the T.R.A.F.F.I.C. conference,” not even on Casino Night, fun as it looks. A counternarrative accrued — Lizzy Grant took a run at stardom through normal channels but didn’t click until a pit crew of handlers relaunched her as a search-engine-optimized Blair Witch pop star — and an army of bloggers, rushing to something too inchoate to really be called judgment, spent the rest of 2011 putting Lizzy’s past on that Summer Jam screen. Down with the Great Deciever! Occupy that crazy frescoed-out church from the “Born to Die” video!

The comment-thread-stoning culture of the Web always favors early renouncers; as long as you’re dubious about everything, you never end up feeling like a mark. But — at least until Del Rey showed up on Saturday Night Live and sang “Video Games” like the Widow Garrett zonked on laudanum and the debate over whether or not she sucked live became a mainstream news story2 — the online shitstorm over Del Rey’s rise felt more personal than that. Anyone who lives online understands intuitively how to create a recombinant persona out of selective self-revelation and carefully chosen old-movie screen grabs; Tumblr being a not-for-profit enterprise for most people, it’s no wonder that the notion of some rich girl leveraging those same tricks to get her sad-eyed fuckdrone avatar a deal with Interscope drove the blogosphere batty and compelled the target market to shoot back. We won’t get into the irony of the Instagram Generation carping about authenticity — Check it out, I made this picture of me writing a snippy tweet about Lana Del Rey look like I took it with a light-leaky plastic camera in 1973! — or the long and noble tradition of pop musicians doing a little punch-up on their biographical details in order to set their work in an imaginary context;3 the point is that Born to Die, Lizzy Grant’s second debut album, arrived in stores today, under a cloud, and I’ve spent four paragraphs reviewing the buzz because talking about the music feels like pretending the case isn’t closed.

But let’s talk about the album anyway: My first time through, I wrote down “elevator-crunk,” “spaghetti-Western keyb. presets,” and “Vespertine microscope-slide drums,” and I stand by whatever I meant by that. Most of the record was produced by Emile Haynie, previously best known for slipping Kanye West a version of the beat that became “Runaway,” from My Beautiful Dark Twisted Fantasy, and more than a few of these tracks unfold like shareware versions of Yeezy’s toast to the douche bags, except Lana’s goblet has hemlock in it. Like Portishead’s Dummy, Born to Die wraps appropriated hip-hop production around narcotized torch singing;4 like Angelo Badalamenti’s Twin Peaks score, it gets a lot of retro-symbolic mileage out of a few well-placed twangy bass plunks. Every song that isn’t “Video Games” credits additional musicians playing instruments both old and newfangled along with Haynie and, usually, a string section, but Del Rey always sounds like she’s alone, her voice isolated in the foreground. Maybe the more appropriate David Lynch reference here is Mulholland Drive‘s Club Silencio: “No hay banda! And yet we hear a band!”

So it’s a singer-songwriter record, basically, and as a singer-songwriter record it’s — um — look, I’m gonna go with “cohesive,” because I can’t formulate an aesthetic judgment of these songs that isn’t really a moral/ideological judgment. Sung in a voice that yo-yos back and forth between “slutty Keebler elf” and “If you don’t call me back I am straight-up gonna take a fistful of downers and a long walk into the ocean,” Born to Die plays with some volatile ideas about sex and femininity and power and helplessness; it’s a collection of love songs to big-strong-cigar-smokin’-rich-daddy figures and “screwed up and brilliant” toxic bad-boy types, for whom Del Rey promises to be a little-starlet harlot or a china doll if they’ll save her from herself, by whose side she promises to ride or die or both. Crazy sex will also be made available, possibly in “Cipriani’s basement.” Listening to this record is like spending time in the head of a super-DTF Bella Swan, or a way less cheerful Courtney Stodden. But even having spent that time, I still can’t figure out where Del Rey (let alone Lizzy Grant) stands in relationship to those ideas as they’re expressed here, just like I can’t say for certain whether a song like “Blue Jeans” is just an oblivious cliché-splosion — in the first verse alone we meet a guy who’s “like James Dean, for sure,” “fresh to death and sick as cancer,” and fits her “better than my favorite sweater” — or some kind of advanced postironic cliché-supercollider in pop-single form.5 I’m not being sarcastic here; I honestly can’t tell.

I’m yoking the clichés and the weirdly retrograde sexual politics together here because they’re both symptomatic of an ambiguity that makes Born to Die interesting even when it seems kind of awful. How reliable is our narrator? Is she just saying these things because she thinks they sound good, and because she’s unselfconscious about the way they’re going to sound to everybody else? Is “Lana Del Rey” some kind of deep-cover Cindy Sherman project designed to critique Lana Del Rey-like personas and/or the culture that encourages performers to adopt them? Is she in control of her craft and her self-presentation6 and saying everything she’s saying on purpose, or is Lana Del Rey what happens when you give up on beating your head against the wall of an uncaring biz and decide to just let the song doctors reprogram you according to some focus-grouped idea of what boys like? If this is her sellout move, why are there no feel-good songs for and about the club? (The songs on Born to Die where she tries to front like a mercenary gold digger don’t ring true, although at one point, during in “Off to the Races,” she sings, “Gimme them gold coins, gimme them coins,” so maybe the video game her boyfriend wanted her to play was Super Mario Brothers.)

My benefit-of-the-doubt assessment of what’s happening here: I think one of the things Lana Del Rey can do that Lizzy Grant can’t is allow Lizzy Grant to examine her own desire to be a Lana Del Rey-type person. I think her palpable yearning7 to be someone other than Lizzy Grant — her hunger for the kind of approval and attention she imagines she’ll get as Lana — is a compelling through-line for a work of art to have. This is a real person who’s decided to tell the world a story about herself, and the story says something about the person even if it isn’t entirely true. And the thing about an affected persona is that you can’t go around telling people it’s an affected persona, because then it’s just you being annoying. You can’t break character — or, at least, you have to make sure no one knows quite where the character ends and you begin. (There’s a reason we feel one way about Rick Ross, Slim Shady, Jack White, and Ziggy Stardust and another way about Sasha Fierce, Bono as the Fly, and Chris Gaines.)

Here’s a quote from Brian Eno, explaining why he decided to start taking the word “pretentious” as a compliment: “My assumptions about culture as a place where you can take psychological risks without incurring physical penalties make me think that pretending is the most important thing we do.”8 And here’s a quote from frequent Eno sideman/King Crimson thrakk-ologist/cultish-guitar-clinic patron Robert Fripp: “The performer can hide nothing, even the attempt to hide.”9 I feel like they’d get along with Lana Del Rey. Look at the picture on the cover of 1973’s classic ambient loop-sizzurp suite (No Pussyfooting): Fripp (he’s the one who looks like a math teacher) and Eno (he’s the one who looks like a space vampire) hanging out together in a space-age house-of-mirrors bachelor pad. Can’t you kind of imagine Lana sitting in between them? They’d talk to her about Oblique Strategies and the superfluity of lyrics; she’d sigh, pout, steal their cigarettes, smile wryly at their naked-lady playing cards, and say things like, “I like things that go fast, things with bright colors, things that taste good. At Coney Island, you can get a Coca-Cola, ride the roller coaster, and watch everybody.”10 Sometimes they wouldn’t know if they were talking to her or one of her reflections, but it would probably be a fun conversation anyway, and no one would be able to say for sure who the coolest person in the room had been.