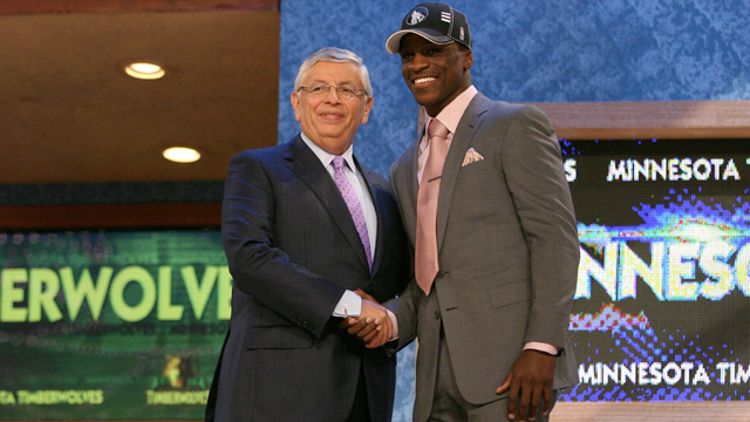 We interrupt Part 2 of the NBA Trade Value column to explain the travesty known as the 2009 NBA draft. That night, Minnesota drafted two of our top-30 trade value guys (Ricky Rubio with the fifth pick, then Ty Lawson with the 18th pick) and passed up a third top-30 guy (Stephen Curry) to take Jonny Flynn. Trust me, this was just as ridiculous at the time. (Check out my thoughts at 5:10 of the ’09 Draft Diary.)

That same night, Minnesota quickly traded Lawson to Denver for a future protected first-round pick that became the immortal Luke Babbitt (2010’s 16th pick). What happened to Babbitt? It flipped his rights, along with Ryan Gomes, to Portland for Martell Webster, who had already been gift-wrapped a more-than-generous four-year, $20 million deal.

What happened to Webster? Turned out he was damaged goods — Webster needed two back surgeries to repair a bulging disc (including one before he ever played a T-Wolves game), struggled through two injury-plagued seasons before Minnesota released him, then became the centerpiece of a contentious compensation process that was only recently resolved (terms were not disclosed).

What happened next? The Timberwolves were so pissed about Portland’s handling of the Webster debacle, they made an aggressive $46.5 million free-agent play to overpay Nic Batum (Portland matched), only they screwed up and didn’t have enough cap room to accommodate their offer after it had already been extended. Whoops! Carving out cap room on the fly, they spent $600,000 to buy out Webster and another $5.1 million to amnesty Darko Milicic, just so they could legally accommodate a Batum offer that, again, Portland matched.

What happened next? Now blessed with extra cap space from two players they never needed to buy out, they signed away retired Blazers star Brandon Roy for $10.4 million over two years, a move that cost Portland its insurance on Roy’s old max contract and had Ric Bucher reporting that it “has Portland owner Paul Allen thinking Minnesota is trying to make life difficult for him.” In the biggest non-shocker in the history of non-shocking sports moments, Roy’s allegedly recovered knees immediately betrayed him; he played five games for Minnesota before hanging it up again.

So if you’re scoring at home …

The Timberwolves turned a potential Rubio/Curry/Lawson windfall into just Rubio (who didn’t come to Minnesota for two extra years); two years of Flynn (played in Australia last year); backup guard Malcolm Lee; three injury-plagued years and more than $15 million of damaged goods (Webster and Roy); and nearly $6 million of Webster/Milicic buyouts. They also briefly had and lost Motiejunas (a promising rotation guy for Houston), Parsons (no. 48 on the trade value list), Mirotic (Chicago’s best prospect overseas) and Cole (a rotation guy for a 66-win team); and they have Memphis’s 2013 first-rounder (near the bottom of a dreadful draft) and Brooklyn’s 2013 second-rounder to show for their troubles.

Ladies and gentleman, without further ado …