What’s the Matter With Manchester United? 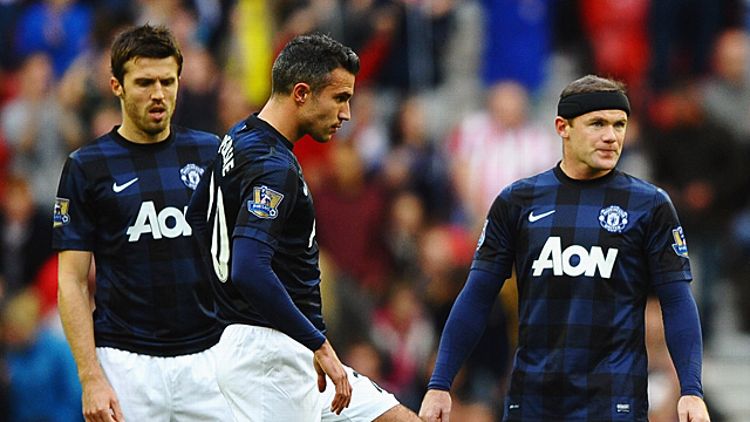 We’re now more than a fifth of the way through the Premier League season, and it’s safe to say that David Moyes’s Manchester United look like an average team. They currently sit tied for eighth place on 11 points, trailing Premier League–leading Arsenal by eight, and are five points out of the last Champions League spot. That’s not good. So what’s the problem with Manchester United?

Will It Fix Itself?

Before we call the doctor, let’s consider whether this is just a minor head cold.

Eight games is, after all, only eight games. In effect, United’s season has already consisted of two distinctly different stretches. They opened with a very difficult run, with road matches against Manchester City, Liverpool, and Swansea, and a home match against Chelsea, with the only gimme coming against Crystal Palace. Things were supposed to get easier over the next few weeks with home matches against West Brom, Southampton, and Stoke, and away games at Fulham and Sunderland. It wasn’t too much to expect the defending champions to capture all of the 15 available points from those matches (as they did from the same fixtures last year). Instead they’ve lost to West Brom, eked out an unconvincing 2-1 win at Sunderland, and drew with Southampton. The Stoke and Fulham matches take up the next two weekends. United are currently squandering the part of the schedule that was supposed to help them recover from their difficult start.

Even assuming that they win their next two matches, a shaky proposition at best, that would put them at 17 points through 10 matches, which averages out to 1.7 points per match. Project that over an entire season and you end up with 64.6 points. Last season, that would have been good enough for sixth place. Barely. Can they make up those dropped points in other games as the season progresses? Of course they can, but given that they struggled to beat Sunderland, Premier League basement-dwellers, you wouldn’t bet on it. In other words, let’s get United to the doctor, and fast.

Under Moyes, United are simply playing slower. While the team has had roughly the same amount of possession this season compared with last season, 55.7 percent and 56.2 percent, respectively, it is averaging one fewer shot per game, down to 13.6 from 14.8. (Thanks to whoscored.com for the possession stats, and ESPN Stats & Info for the rest of the numbers.)

There’s nothing necessarily wrong with a decrease in shooting volume, provided it’s for the right reasons. If the amount of time United spent leading in games increased from last season to this season, it would be easy to imagine them playing conservatively and taking less shots. Or, if Moyes instituted some tactical changes that meant moving the ball more patiently in order to create better scoring opportunities, which his team could then convert at a higher rate, that, too, would be understandable. Neither of those things are happening. This iteration of United shoots at a lower volume, and less efficiently, than last year. And when they fall behind, they ramp up the shooting and become less efficient, as opposed to last season’s team, which actually slowed the pace when losing, but scored at a ridiculously high rate.

Last season United spent more time than any other team in the lead — an average of 43:32 per game. This season, that number has declined to 26:49 per game (thanks to Ben Pugsley of Stats Bomb, among other places, for the game state numbers). If anything, that would suggest United should be shooting more this season, not less.

Typically, teams shoot less frequently when they are winning, happy to sit back and defend without the ball. Teams shoot the most when trailing. When teams are tied, shooting rates can vary quite a bit based on how conservative a manager has decided to be.

As United hit the “easy” part of their schedule over the last three games, they still only managed 5.4 shots per game while tied. United should be destroying these teams. It’s worth noting that it’s not like last year’s United team was particularly prolific when it came to shooting. They were only seventh in the league in shots taken.

That team made up for its relative lack of shooting volume with ruthless efficiency, another trait that this United team doesn’t have. Ferguson’s side led the league in converting chances. After stripping out own goals and penalties, they converted on 13.69 percent of their shots, almost three full percentage points better than any other team in the league. This year, United are in seventh, converting on only 9.26 percent. That’s a steep drop, but it’s not the worst of it. United were almost magical last season at coming back from losing positions, actually improving their conversion rate to 21.25 percent, which more than made up for the fact that they shot the ball only 4.8 times per 90 minutes. This season’s team has ramped up the pressure — and the ineffectiveness. They manage to shoot an average of 8.5 times per 90 minutes when behind, but have only scored three times out of 36 shots, or a pretty dismal 8.33 percent.

United are spending more time losing, shooting less, and less efficiently. Those are not encouraging symptoms.

So why is Manchester United’s attack atrophying? The first reason, and the easiest one to see, is that they are getting dramatically reduced contributions from set plays. Wayne Rooney has scored three times already from direct free kicks. That’s great. The rest of the time, United have managed to create 18 shots and no goals. That’s a total set-play conversion rate of 14.3 percent, which is actually quite good, but it’s not as good as the 17.5 percent conversion rate from last season. Additionally, the three shots a game they are creating from set plays is 0.4 less than last season, even though the number of free kicks and corners they are getting in their opponent’s half has actually increased from 10.3 to 10.9 per game. That’s almost half of the shooting gap right there, from free kicks alone.

Luckily, this particular problem has an easy solution: Robin van Persie needs to take more corners and free kicks. Last season, in the attacking third when van Persie was on the field, he was responsible for 49.8 percent of all free kicks taken by United. This season, that number is down to 35.3 percent. He’s one of the purest strikers of the ball in the game, and he took almost half of the kicks for the team that was by far the most successful at converting dead-ball situations into goals, yet Moyes has reduced his role. It makes no sense. Giving van Persie more responsibility in these situations could have an immediate positive impact on the team.

There’s a larger issue here with United’s attack. Below are heat maps showing the locations from where passes into the final third of play originate. First look at last season:

Now look at this season:

They are fairly similar, except for the center of the field. There are fewer balls being played from there this season. This isn’t an accident. One of the hallmarks of Moyes’s approach during his 11-year reign at Everton was the emphasis placed on overloading the flanks, while using the center of the field mostly as a hub to transition from one side to the other. It seems to be the same plan he is instituting at United. In order to make those overloads work, it becomes the responsibility of whoever is playing off the striker to drift out toward the edges to help create the numerical advantage. This appears to be a lot of what Rooney is doing this season. If we compare heat maps of where he’s receiving the ball when it’s passed to him in the final third, it appears he is getting more touches on the wing and fewer in the center this season.

This approach made sense at Everton, where Moyes was on a limited budget. You know what costs a lot of money? Strikers, advanced creative playmakers, and incisive, deep-lying playmakers. Moyes minimized those roles, out of necessity. Strikers are largely isolated up front and basically tasked with making themselves available to provide a finishing touch, while the traditional advanced creative player instead becomes something of a roving extra body. Rather than create with the ball at his feet, he moves toward the side to help a winger and fullback numerically overwhelm their counterparts, and the deep-lying central midfielder’s responsibility is, primarily, to swing the ball from side to side. The midfield band of four is primarily anchored to their positions to maintain defensive positioning should the ball be lost.

This is the wrong system for United. It isolates van Persie from his teammates, making one of the most versatile strikers in the game one-dimensional. The average distance of a pass to him from teammates in the final third has increased from 15.9 yards last year to 17.4 yards this season. Meanwhile, Rooney, who’s lethal at drawing players to him in the middle of the park and absorbing contact before passing the ball into space, has been pushed to the wings, usually without the ball, in order to combine with wingers. Rooney’s touches in the central third of the field have dropped from 28.9 per 90 minutes last year to 23.5 this season.

The system brings out the worst in Michael Carrick as well. He’s at his strongest when acting as that deep-lying playmaker. His range of passing is quite good, but too often he settles for the less ambitious, simple ball, despite having the ability to spray diagonals down the field. All this system asks him to do, though, is play those simple balls.

The wingers and fullbacks are asked to do the majority of the heavy lifting in attack. Talent-wise, wingers are United’s blind spot. This season, Moyes has already used six players on the left wing spot alone (Ryan Giggs, Adnan Januzaj, Shinji Kagawa, Nani, Danny Welbeck, and Ashley Young). The reason he’s casting around for the right fit is that they all primarily want to play with the ball at their feet. But the system requires them to patiently create overlaps when they are on the side with the ball, making runs into the box to provide an extra target when they are on the off side.

Manchester United’s problems are fixable. The problem is that they’ve gone from Sir Alex Ferguson, who was a master at getting the most out of talented but flawed players, to Moyes, whose biggest strength is using a rigid system to promote the limited talents of players with considerably lower potential than the players he has now. The system Moyes is instituting is designed to create a host of mediocre chances for mediocre players, rather than allowing talented attackers to create higher quality chances for themselves.

United need to attack opponents from the center of the pitch out, rather than advancing down the flanks and looking toward the middle only for the final ball. There’s no reason why they can’t make that adjustment, and quickly. After all, these United players have all played that way before. The concern is that Moyes never has, he has never had the talent to, and there’s nothing to suggest he’s aware of the adjustments that have to be made. It should be clear, though, that the current approach isn’t working. Moyes needs to stop tinkering with his personnel to find the best system, and start tinkering with his system to better suit the abundance of talent he has on hand. If he does that, the patient will be fine. If not, well their season could be dead on arrival.