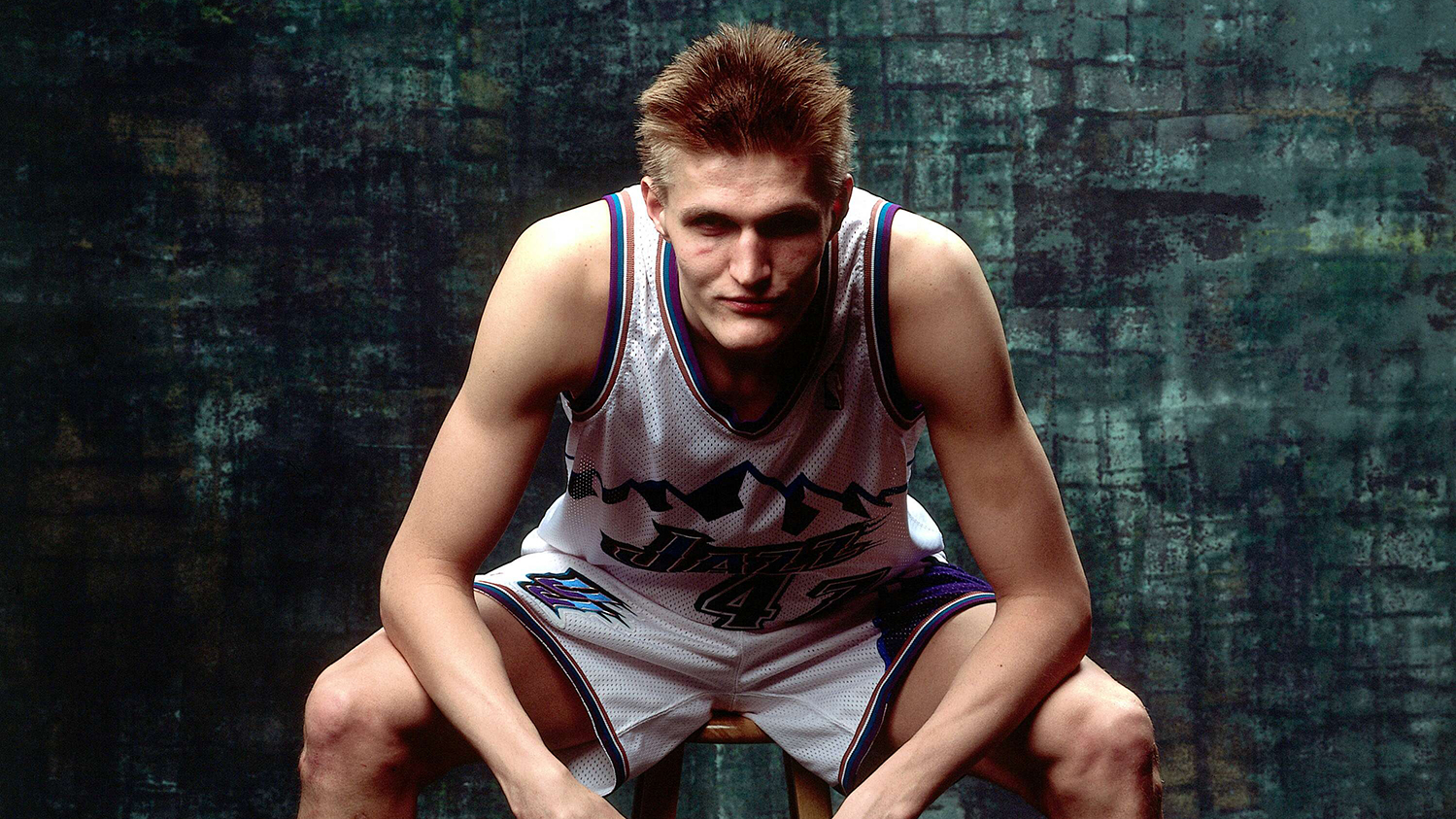 “A bit of an unknown commodity,” reads a blurb from a July 1999 NBA draft piece. The unknown commodity in question was an 18-year-old forward playing for CSKA Moscow by the name of Andrei Kirilenko. After 13 NBA seasons and a nearly 20-year professional career, which might be at an end, the statement still rings true. Kirilenko is a singular and strange talent; quantifying him as a basketball player is like gazing at a faraway mirror.

Everything about Kirilenko appeared anomalous, especially at the beginning. He arrived slightly ahead of his time, and in between eras, both in the NBA and with his team. Drafted with the 24th pick in 1999, Andrei was part of the late-’90s and early-aughts Euro Fever, when the ascendance of Dirk Nowitzki, Peja Stojakovic, and Vlade Divac led teams to scour overseas leagues for lanky shooters and skilled bigs with names like Frederic Weis, Maciej Lampe, and Nikolaz Tskitishvili.

Even with the day’s pivot to Europe, though, a player coming over from Russia — a country that was America’s hegemonic foe for half a century — seemed odd. Before Kirilenko, there had been only three Russian players drafted by NBA teams, but none appeared in even a single game.1

Meanwhile, in Utah, the twin Doric columns of John Stockton and Karl Malone were still sturdy, but clearly no longer stable enough to build on. Jerry Sloan, old school since the Cambrian, held cantankerous sway, keeping white-knuckle control over his offense and lineups. Fresh blood, and a bridge to the future, was needed, if not necessarily welcomed. 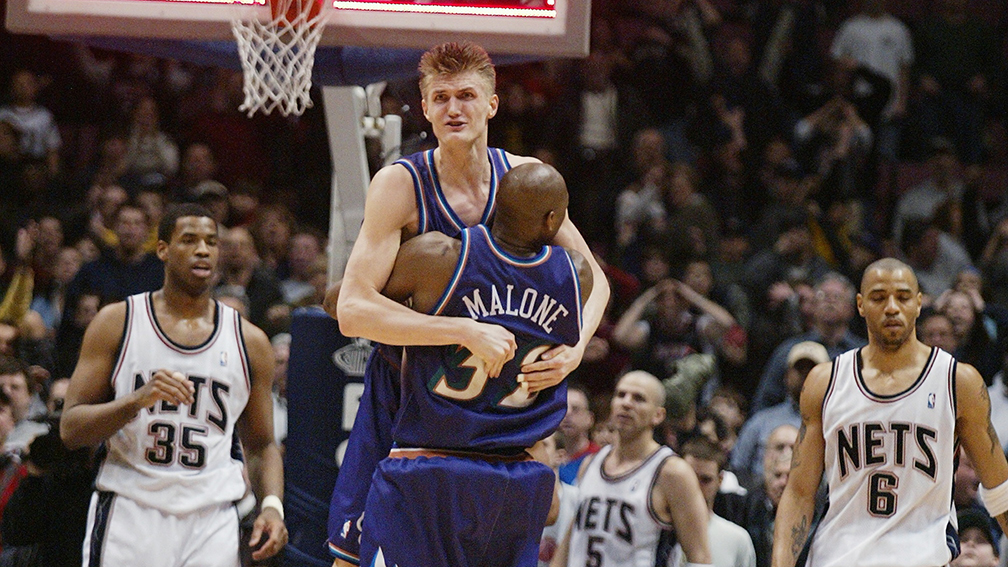 More broadly, the league (and the way its fans thought about it) had yet to be transformed by the analytics movement. And new ideas about the importance of length, mobility, and positional interchangeability had yet to fully form.

Into that gray area between the old and new stepped Andrei Kirilenko. At 6-foot-9 and a bit over 200 pounds, with translucent skin and a shock of blond spiked hair, he looked like a fistful of drinking straws arranged to resemble a person. You half-expected Andrei to shatter while navigating the paint against the league’s brawny battleships. Never a great shooter, he could run and jump like a deer — slashing into the lane for dunks or to drop off a smart pass. His arms appeared like a comic-book artist’s trick of perspective, telescoping out of their joints in order to knock opposing players’ shots out of the air or snatch passes mid-flight. He could guard all five positions.

YouTube highlight videos are misleading almost by definition. Turning multiple seasons of a player’s career into seven or eight minutes of video is an exercise in propaganda, not representation. But in Kirilenko’s case, it’s practically the only way to understand what a freak he was.

As a rookie, Kirilenko quickly started compiling omnivorous stat sheets. In his eighth game as a rookie, against the Orlando Magic, he had 13 points, eight rebounds, two assists, two steals, and four blocks in 25 minutes. A month later against Dallas: 16 points, five rebounds, six steals, and three blocks. Jazz fans glimpsed their future during a game against Detroit in March when Malone sat out with the flu. AK-47 played 44 minutes and scored 27 points, grabbed nine rebounds, handed out an assist, nabbed a steal, and blocked two shots.

I think that I, like most NBA fans in their thirties, first took notice of Kirilenko in the 2003-04 season. The Stockton and Malone era ended in the spring and summer of 2003, when the former announced his retirement and the latter followed the promise of a title to Los Angeles. Carlos Arroyo went from averaging six minutes a game the previous season to being the nominal starting point guard. Utah’s big offseason move was to bring in Keon Clark (currently serving an eight-year prison term) from the Kings for a second-round pick. A Jazz collapse seemed certain.

Instead, Kirilenko hefted the Jazz upon his sparrow-like shoulders and put in a truly magical season. His 2003-04 stats: 16.5 points, eight rebounds, three assists, two steals (fourth in the league), 2.8 blocks (third in the league), and a PER of 22.6. The list of players who have averaged eight rebounds, three assists, and two steals with 2.5 blocks or better in a season contains names like David Robinson, Hakeem, and Kareem. Kirilenko (along with 2007 Josh Smith) was the youngest to do it. That season, he also emerged as one of the league’s best help defenders, terrorizing players with weakside blocks and smothering plays with his length. Kirilenko made his only All-Star team that season, and the Jazz finished at a frankly shocking 42-40. He looked like a real piece for a team to build a contender around. He was wildly popular with Jazz fans and self-effacing. He was Giannis before Giannis, and without the Internet adulation (and also better). In the offseason, the Jazz signed Kirilenko to an $86 million, six-year max extension.

And then it all just kind of came apart, bolt by bolt. First, there were injuries: knee, wrist, back, a dizzying collection of aches and strains. He missed half the 2004-05 season, and wouldn’t miss fewer than 10 games per year for the rest of his career.

More insidious than the physical problems, though, were the emotional cracks that appeared as his minutes shrank, and Sloan’s dictator-in-a–John Deere–hat grouch style began to work its dark magic on him. After a Game 1 loss to the Rockets in the first round of the 2007 playoffs, in which Andrei played only 16 minutes, Kirilenko wept openly at practice while discussing his role with reporters. “I want to play 48 minutes,” Andrei croaked.

Sloan put the granite in hardass, of course, and everyone loved him for it. But the gap between the coach and his player wasn’t just generational, it was cultural. Soon after Andrei’s crying jag, Masha Kirilenko suggested that the Jazz get her husband an interpreter to help him and his coach communicate better. That’s the kind of suggestion that would come off as progressive, even Spurs-ian, today — a way to better develop your players.

And yet, when healthy, and when allowed to play freely, the dude never stopped being a difference-maker on defense, and he was always a threat to put up numbers that looked like Fantasy League Viagra. He had 16 points, 10 rebounds, six assists, one steal, and four blocks as a member of the Timberwolves in 2012. In 2013-14 with the Nets: 10 points, 10 rebounds, three assists, and four steals in a win against the Lakers. Over the past 20 years, he’s the only player besides Olajuwon to put up multiple five-by-five games, in which a player tallies five or more in five different positive statistical categories.

Late-career Kirilenko seemed like the perfect missing-piece player — a multi-skilled, multi-positional playmaker and defender who could take the right team over the top. I kept waiting to hear that the Spurs had signed him. Instead, he ended up in Brooklyn, on a basketball team version of The Expendables, after opting out of a $10.2 million payday with the Timberwolves to take the Nets’ $6 million, two-year deal.

A laundry list of injuries limited him to only 52 regular-season games in his two seasons with the Nets. Brooklyn was 33-19 in those games. Kirilenko’s disembodied contract was sent to the Philadelphia salary-dump graveyard in December of last season and he was waived a little over two months later.