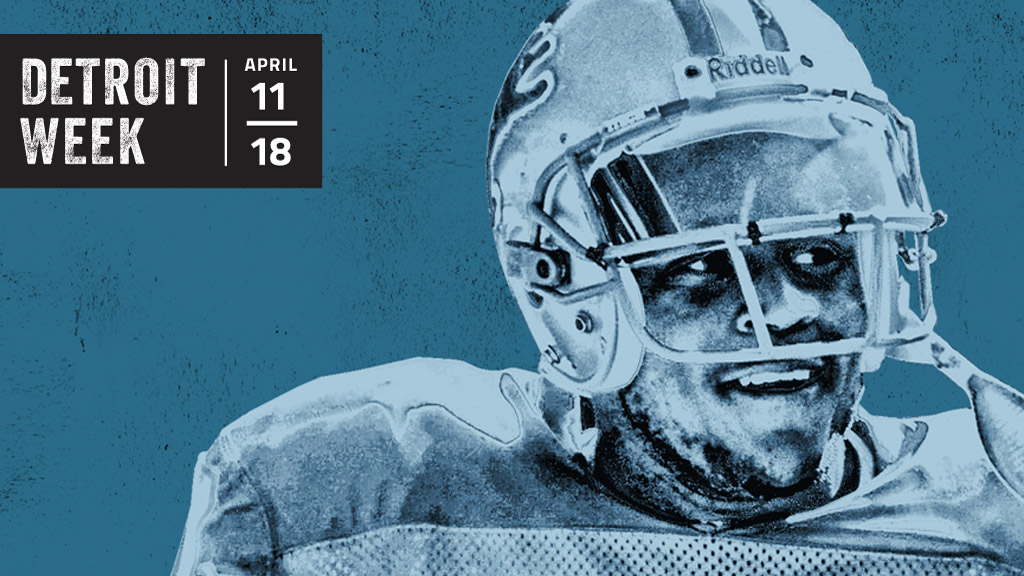 When people remember Barry Sanders, the first thing that comes to mind is the retirement. It’s like talking about a rock star who overdosed. As the years pass, it becomes impossible to separate the music from the way it all ended.

With Barry, this makes sense. Even 15 years after he left, it’s kind of amazing that all this really happened. With almost any story from 20 or 30 years ago, you can say, “Imagine if that happened today …” and watch people’s eyes pop out while they consider the possibilities. But Barry’s retirement was pretty insane even then. On the day before training camp, in 1999, his agent informed the team he was done. He faxed a retirement statement to Barry’s hometown paper, the Wichita Eagle, that told the world, “My desire to exit the game is greater than my desire to remain in it.”

And the rest of the world spent the next few months wondering if he was serious. Was it a ploy to force a trade? Was it a contract thing? What was the next move here? In D.C., everyone thought the Redskins would try to trade for him. Nobody was willing to admit he was actually done.

He was 31 years old, just a year removed from putting together one of the greatest seasons we’ve ever seen from a running back, and still completely healthy. He was also one year away from breaking Walter Payton’s all-time rushing record.

But while the Lions got ready for training camp, Barry faxed that statement to Wichita, then went to the Detroit airport, got on a flight to London, and went to Europe to disappear for a few weeks.

He was called selfish, attacked for quitting on his teammates, and even sued by the Lions, who wanted part of his signing bonus back. But as the years have passed, the way he left has become part of the legend. The only part of it I hate is that it distracts everyone from everything he actually did on the field.

It’s Detroit Week on Grantland, and it seems like a good excuse to talk about the most incredible football player I’ve ever seen. And also a good excuse to post a five-minute video of Barry running to Public Enemy’s “Welcome to the Terrordome.”

“Barry Sanders is my new idol,” Bo Jackson said after a Raiders-Lions game in 1990. “I love the way the guy runs. When I grow up, I want to be just like him.”

The Raiders won that game, and the Lions were 4-9 at the time, but it didn’t even matter.

All anyone could talk about afterward was the “little water bug” who “might rewrite history.”

This wasn’t necessarily a metaphor for Barry’s entire Lions career — he was on more playoff teams than people remember — but it definitely covers about half the years he spent in Detroit. Even when the Lions were awful, Barry would still have a few plays every game that would keep people gawking afterward.

Bo Jackson had a similar effect on people, which is part of what makes that old quote so cool. The Bo Jackson combination of speed and power is something we’d never seen before and haven’t seen since. He was a cult hero then, and the legend has only grown over the years.

People also remember Video Bo, the most unstoppable video-game character of all time, and that reminds me of one of my most frustrating childhood memories of Barry. No matter how cool he was in real life, once people put Barry’s size and speed onto a video-game character, he became human. He could outrun anyone in a video game, he had the best juke moves in the game, and he was still good, but playing Madden with Barry was always underwhelming. No matter how high his ratings were — speed, agility, jukes, strength — EA Sports could never program whatever it was that made him so great.

It’s a stupid example of a larger truth with Barry. There was no formula for anything he did on a football field. As a model for other running backs, one of the greatest running backs of all time is a horrible example. Nobody should ever try to run like Barry Sanders, because they will never be Barry Sanders.

Other running backs are simple math. Speed + power + blocking = touchdowns. With Barry you had speed, two gigantic thighs and a low center of gravity, and then something like magic that made it almost impossible to ever really hit him. He found holes that didn’t exist, he scored touchdowns that should’ve never happened. Barry didn’t work in video games because designers couldn’t program someone who was a cheat code in real life.

Barry’s rise came just as I as got obsessed with football, and he was the easiest thing in the NFL to appreciate. The spectacle of watching someone that small make so many gigantic defenders look so helpless is sort of self-explanatory.

It wasn’t always perfect, obviously. He went backward on a bunch of plays. He got bottled up for no gain. He got stopped in the playoffs. But just when you were ready to dismiss him as a gimmick, there would be some ridiculous run that made you say, “Ohhhhhh, right, that’s why they keep handing it to Barry.”

There are Hall of Fame numbers, too, if you want numbers. He came out of nowhere in 1988 to unleash the greatest statistical season in college football history, and then spent the next 10 years being just as unstoppable in the pros. He had 1,000 yards in every season he played. 1,470 his rookie year, 1,491 his last year. As brilliant as he was, he was also stupidly consistent. He averaged five yards per carry for his career. He tortured the Tampa Bay Bucs on an annual basis. There was that stretch in 1997 when he got 2,000 yards in the final 14 games and won NFL MVP.

But the numbers don’t really cover what made him great. Not even in that MVP year.

For example, this goes down as a 39-yard touchdown run against the Patriots, but in real life it was also an act of pure evil that may have put poor no. 42 in a wheelchair.

This is technically a 47-yard touchdown to beat the Cowboys in the playoffs, but it’s also a run that a makes a playoff defense look like a bunch of clueless henchmen in a bad action movie.

“Life doesn’t stop with football,” Barry once said. “Happiness does not come from football awards. It’s terrible to correlate happiness with football. Happiness comes from a good job, being able to feed your wife and kids. I don’t dream football, I dream the American dream — two cars in a garage, be a happy father … ”

That came in 1988, explaining to reporters why he didn’t care about the Heisman Trophy. It just as easily could’ve been about Walter Payton’s all-time rushing record, explaining why he was leaving football, more than a decade later. His whole career, Barry had more perspective on football than most anyone who was watching him.

“If I could change anything in football,” he once told Mitch Albom,”it would be how people worship the athletes. I go to Winans concerts, and I like them a lot, but I don’t worship them. I know they’re no different than the desolate man in the street.”

Aside from the amazing visual of Barry Sanders at a Winans concert, that’s a good look at the way he saw himself in the NFL. When he retired, I remember being confused, and ultimately concluding at 12 years old that Barry was just an introverted weirdo we’d never understand. Part of that’s still true, except that as the years pass, I also get the feeling that Barry understood sports better than any of us.

There are some people who will say he was the most overrated running back in history because he was 1-5 in the playoffs, and he never won a Super Bowl, and he spent most of his career on losing teams. But in retrospect, it’s kind of perfect that he got stuck with the Lions and Wayne Fontes, because having him in Detroit forced everyone to love him less for what he did, and more for how he did it.

We love sports for all kinds of stupid reasons, but the one reason watching sports always makes sense is because every now and then we see people like Barry: people who make impossible things look so effortless that it sort of defies belief. We see people whose innate talent can really only be explained as a gift from God, and then we get to watch them exercise those gifts on a daily basis. How many other places in life can you watch a genius work?

We’re not in the studio while Kanye builds songs, we weren’t in the garage while Steve Jobs was building computers, but anyone could watch Barry Sanders take a nothing run and turn it into everything.

It’s something to think about when we talk about guys like Calvin Johnson, or Adrian Peterson, or even LeSean McCoy, the closest thing you’ll see to Barry today.

Wins and losses and all-time records make sports fun and dramatic, but they’re ultimately pretty stupid for adults to actually care about. It’s the chance to watch some of the most gifted humans on the planet that makes this stuff worth it for anyone. Barry proved both these lessons.

In July 1999, he got on a flight to London and taught us exactly how unimportant sports really are. But if that’s the first thing that people will remember him for, we should also remember that what he did for the previous 10 years is everything that can make sports great. I didn’t watch him win a Super Bowl, I never saw him break Walter Payton’s record. But I watched Barry Sanders play running back and bounce through a hundred different defenses like it was nothing. That’s good enough.