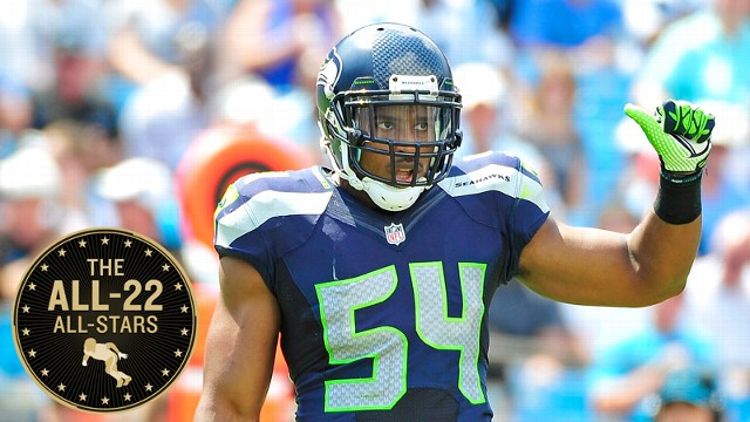 If 15-year-old Bobby Wagner had gotten his way, he never would have played football. He never would have been a four-year starter at Utah State, or first-team All-WAC three times. He never would’ve been an NFL starter as a rookie for one of the league’s best defenses. If it had been up to his younger self, Wagner would’ve grown nine inches by his 16th birthday and become a basketball star. It was only after he realized that growth spurt wasn’t coming that Wagner decided basketball probably wasn’t his future. And with a new football staff of coaches in place at Colony High School in Ontario, California, he made peace with a life in the trenches on his way to the field for the first time as a junior.

Game in 25 words or fewer: An athletically elite middle linebacker who consistently makes plays in the run game and is a more than capable player in coverage.

When people are talking about the Seahawks’ 2012 draft a decade from now, that conversation will start with Russell Wilson. But right now, Seattle’s finds from last April also include what it stumbled upon with the 47th pick. Seven years after his first snap, Wagner has entered his second season in the middle of the Seahawks defense. Seattle’s hope for Wagner was that he’d compete to be its starting middle linebacker — the most glaring hole in an otherwise excellent defense — but by season’s end, he’d surpassed any expectations the Seahawks could have had for his first season. Five games in, he was already playing every snap, staying on the field in each of Seattle’s sub and nickel packages, flashing a grasp of the defense beyond what nearly any 22-year-old rookie could manage.

But Wagner never had a doubt. “I was thinking, If I can get 100-something tackles in 12 games, imagine what I can do in 16,” he says. He no longer has to. Wagner stacked up 140 tackles as a rookie, the seventh-highest total in the league. Seattle’s Super Bowl expectations may be tied up in the leader the team found under center, but if this really is the Seahawks’ year, that will have plenty to do with the one they now have on defense.

Kevin Clune knew what he had in Wagner the first time he saw his sophomore linebacker in his natural environment. Clune had come to Utah State before the 2009 season to be the linebackers coach for Gary Andersen’s new staff, and one of the Aggies’ early team activities involved a three-on-three basketball tournament before spring practice. “How competitive he was, and how he ran around on the basketball court and took control of the game, that really showed us what we working with,” Clune says.

Wagner had started the final nine games of his freshman year, but in Andersen’s new 3-4 scheme, there were questions about where he’d fit in the defense. Clune saw a raw, athletic talent who had potential to play inside or outside linebacker. But over the course of spring practice, it became clear that Wagner was made to be a tackling machine.

In two high school seasons, Wagner averaged more than 100 tackles, but when he and Clune started their work together, he had played fewer than 40 organized football games in his life. So his role was limited to his individual assignment. And in that first season, that would be enough, Clune figured. Wagner led the WAC with 115 tackles on his way to first-team all-conference honors. So much for limitations.

In the spring before his senior season, Clune noticed Wagner scribbling in a notebook during a position meeting. Initially, he thought his star was ignoring the day’s lesson. When Clune went over for a closer look, he realized that Wagner had been fervently jotting down everything Clune had said. “I don’t know how many notes he took, but he was writing down everything — absolutely everything,” Clune says.

Soon, Wagner was given free rein of the Utah State defense. If he felt like he had an advantage over an opponent’s right guard, Wagner could shift the blitz patterns and coverage such that he’d be the one attacking the quarterback. Clune couches his comments by saying that there were some restrictions, but he also mentions that there were plenty of plays that had “Bobby” right in the name.

The development of Wagner’s knowledge was huge. It doesn’t hurt, though, that the 6-foot linebacker is a physical marvel.

Wagner actually missed the NFL combine with pneumonia, but when it came time for his pro day, he put on a display that sent him hurtling up draft boards. His recorded broad jump of 11 feet bested every other figure at the combine, and the 241-pound Wagner clocked a 4.46 in the 40-yard dash.

Clune points to two specific attributes that set Wagner apart from even the highest-caliber athletes. The first is the length of his arms. “I always joke, he might be 6-foot, but he’s got the arms of a 7-footer,” Clune says. “If you’re not perfect as a blocker, all of a sudden, he’s got you locked out, and it seems like he’s three feet away.” The other is his first step, another trait Clune first spotted on the basketball court. Wagner may not have the build for hoops, but without the game he may not have become the linebacker he is today.

His astounding measurables played a role in why teams like Seattle and Dallas were interested in Wagner as early as the second round. Speaking to reporters following the draft, Seahawks assistant director of college scouting Eric Stokes noted, “First and foremost [Wagner] is a big-time upgrade athletically. His speed and his range are going to be very impressive.” But in Wagner, Seattle also had a player whose testing figures matched his productivity. Wagner was the defensive MVP of the Senior Bowl, collecting seven tackles during the game and impressing in tackling drills all week.

Watching Wagner, it’s those abilities as a tackler that stand out as much as — maybe more than — his speed. Plays like this one, in which Wagner manages to chase down Cam Newton in the open field, are great highlights, but others like the one above are even more prevalent. According to Football Outsiders, Wagner had a tackle or assist on 27.5 percent of run plays faced by the Seattle defense — the highest figure in the league. Some of that is due to Wagner’s speed allowing him to be in on plays anywhere on the field. But for tacklers of his caliber, it’s about more than the ballcarriers they can get to. It’s about the ones they can find.

Again and again, Wagner’s patience shines through on film. Here, in a Week 8 game against Detroit, the Lions run a play that initially appears to be a zone to the left side but is actually a designed cutback. Rather than overrun to his right, Wagner waits just long enough for it to develop that he identifies the cutback lane, fills it, and drops Mikel Leshoure for a loss. One draft scouting report noted that Wagner “plays with his feet pointed forward,” a nod to his ability not only to get to running backs, but to make plays squared-up and downhill. Doing that with such patience is partially a product of Wagner’s proficiency for reading blocking schemes and diagnosing plays so consistently.

Wagner says that the most difficult part of the NFL transition was getting acclimated to the pro passing game. “In college, you might be able to get away with things here or there,” he says. “In the NFL, you can’t do that. There are just too many smart quarterbacks.” By Seattle’s second game, Wagner was making all the defensive calls when he was on the field. He says that understanding route combinations and tendencies is the area of his game he most wants to improve in his second year, but even if Wagner simply replicates his production from his rookie season, the Seahawks likely won’t be disappointed.

The first two weeks of Wagner’s sophomore campaign have been ripe for comparison. Last Sunday, the Seahawks traveled to Carolina to play Luke Kuechly and the Panthers. Both Kuechly and Wagner were taken in last year’s draft — Kuechly ninth overall — and they finished first and second, respectively, in last year’s Defensive Rookie of the Year vote.

This week, the comparison will be one Wagner has already been making on his own for some time. In college, as his interest in the linebacker position grew, Wagner began studying the best the game had to offer, which typically led him to Patrick Willis. Now, he and Willis are the leaders on defense for perhaps the two best teams in the NFC. On Sunday night, they’ll meet in what might be the most anticipated regular-season game of the year. Wagner admitted that on top of what’s at stake in the current Seahawks-49ers rivalry, there’s another element to playing against the likes of Willis and NaVorro Bowman. “You come off the field, and the people considered the top two linebackers in the game [come] onto the field,” Wagner says. “You want to stand out when you’re playing against those guys. I don’t play this game just to play it. I play it because I want to be the best. I definitely see who my competition is, how I feel I compare to them. I feel like I can be just as good as anybody else.”