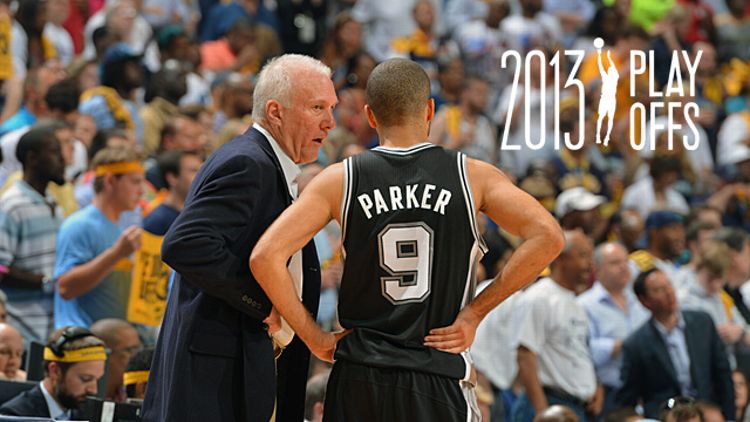 If you’ve tuned in to watch the San Antonio Spurs play at any point this season, you’ve no doubt heard an announcer gush over the team’s elegant offensive system. After years of his teams employing an extraordinarily successful, but unsightly, post-centric system designed around Tim Duncan, over the past few seasons head coach Gregg Popovich has created an exhibition of basketball beauty centered on his point guard, Tony Parker.

The Spurs offensive system can be made to seem almost mystical at times, as if Pop were some basketball wizard waving a magic wand to bring about a cascade of 3-pointers from the ether. In reality, nothing San Antonio does is revolutionary. The team is simply committed to a series of principles that play up the talents of the crafty Parker. Here’s a look at the five tenets of the Spurs offense.

The final frontier … in basketball. Without it, an offense can be suffocated with ease by elite defensive teams in the playoffs. The Spurs, long known for their reliance on the corner 3, can field multiple lineups with at least three players capable of knocking down perimeter shots. With so many players capable of knocking down outside shots, the Spurs spread defenses thin and create huge gaps for Parker to drive to the rim or draw help and kick the ball out to a wide-open shooter.

As today’s defenses grow more and more sophisticated, the pass is becoming an increasingly valuable weapon for NBA offenses. The Spurs are one of the few teams that lack “ball stoppers,” players who are unwilling or unable to quickly move the ball around the floor to an open man. Duncan, one of the greatest players of all time, sets the tone in this department with his unselfish behavior in the high post. On a reversal pass, the Spurs’ star big man will often move the ball to the opposite side of the floor without a moment’s hesitation, keeping the defense scrambling and getting a teammate a wide-open shot. By utilizing ball movement so effectively, the Spurs are able to make up for the fact that they have only one player — Parker — capable of breaking down a defense by himself.

Popovich and his staff are masters in the art of deception. Few teams in the league can match the clever nature of some of San Antonio’s primary sets. More than a handful of times a game, the team will run a play that seems designed to look like one thing, only to have the play’s real purpose emerge after it’s too late for the defense to properly react. The Spurs’ “Hammer” action, in which a ball handler drives toward the baseline on one side of the floor in order to make a pass to a shooter floating toward the opposite corner with the help of a back screen, is a classic example of San Antonio sleight of hand.

Once a defense is organized in the half court, even the best offenses have trouble creating a good look. It’s why nearly every coach in the league talks about the importance of getting out on the break and grabbing easy baskets. The Spurs certainly aren’t going to turn down great looks early in the shot clock, but the team primarily pushes the tempo with the idea to run its offense before the opposing defense is set, not just to find a quick shot. San Antonio attacks early to force opponents to try to defend complicated actions — like the double ball-screen above — while they are retreating and scrambling to match up.

Every game, Parker will tirelessly attack opponents in pick-and-rolls, creating shots for himself or collapsing the defense and creating shots for his teammates. And though we tend to think of elite finishers as the long, athletic players who fill highlight reels with their rim-rattling dunks, Parker is one of the best in the league when it comes to converting shots close to the rim, thanks to his nifty array of finishes.

Derek Jeter's Diary: We're Not Even Talking About That A-Rod Thing