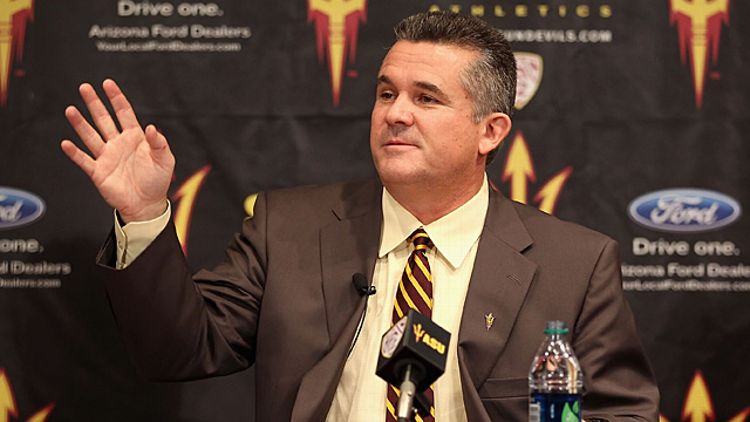 Is Todd Graham, the new head football coach at Arizona State, the worst person in the universe? Let’s consider the evidence.

In 2006, Graham was the coach at Rice. Mr. Premature Evacuation, as the Houston Chronicle called him, lasted one whole season before he left for Tulsa. After four seasons with Tulsa — during which he treated at least one prominent sportswriter like crap — Graham left for Pitt last January.

Graham did the Pitt job for all of 11 months. Then he sent his Panthers players a text message. The message announced he was leaving for Arizona State and was signed, “God Bless.” A few days later, Graham was knotting a maroon-and-yellow tie for yet another introductory press conference. “No class, he’s a quitter, soft, liar, hypocrite,” tweeted Pitt receiver Devin Street. He added, “I feel like dirt and I was just abused.”

“I made a mistake,” Graham told Fox Sports. “The mistake was I probably should have never gone to Pittsburgh in the first place.”

There’s more: Before he left Pitt, Graham blasted his own job-hopping assistants, calling them “mercenaries.” But despite everything you just read, let’s try a thought experiment. What if Todd Graham isn’t the worst person in the universe? What if he’s merely an unremarkable dickhead in a universe that encourages, and occasionally even justifies, dickish behavior? Here are four semi-defenses of the charges Mr. Premature Evacuation is facing:

Street and his teammates got left in the lurch when Graham split. That’s bad. The thing is, the problem is way bigger than Graham. Last season, by my count, there were five Football Bowl Subdivision head coaches who hopped to bigger jobs (six, if you count Greg Schiano). But 18 head coaches got fired (I didn’t count a few well-timed “retirements,” like Hawaii’s Greg McMackin, and special cases like Ohio State’s Luke Fickell and Joe Paterno). When Ole Miss’s Houston Nutt or Colorado State’s Steve Fairchild gets canned, their players are left in the lurch just as surely as Devin Street was. If Graham reneged on the deal he made with his guys, then so did the administrators who fired their coaches.

Yup, that was cowardly. But here are some other profiles in courage: In December, Texas A&M’s Mike Sherman — the world’s nicest coach — was fired via a call to his cell phone. He was parked in a recruit’s driveway. The week before, Akron coach Rob Ianello was fired by cell phone, too. Ianello was en route to his mother’s funeral.

3. Graham is a bullshit artist.

It’s fun to pick apart Graham’s corporate-speak — ASU, he wrote in his good-bye text, was his “dream” job. (You know, unlike his past and future ones.) I’d like every college coach to talk like Les Miles. But college football is a multibillion-dollar industry. When we fire the coach, we justify it by saying, “It’s a business.” If it’s a business, then insincere business-speak is a minor side effect.

I’m not disputing that. But it’s all part of the game. My guy, Mack Brown, is seen as the model of an upstanding coach. But look at his résumé: One year as coach at Appalachian State; the next as Oklahoma’s offensive coordinator; three years as the Tulane head coach, leaving as soon as they got to .500; 10 seasons at North Carolina, leaving after declaring his love for the Tar Heels …

A college coach, like a shark, must keep moving to live. In an era in which it takes five seconds to get on a message board and call for someone to be fired, it’s silly to ask a coach to wait passively for the ax. Todd Graham, in his own despicable way, is the model coach of modern college football.

Don’t worry if he’s not the worst person in the universe. In a few years, we’ll probably have Bobby Petrino back.

Breaking Down Russia's Alexey Shved and His NBA Potential