NHL Grab Bag: No One Is Untouchable 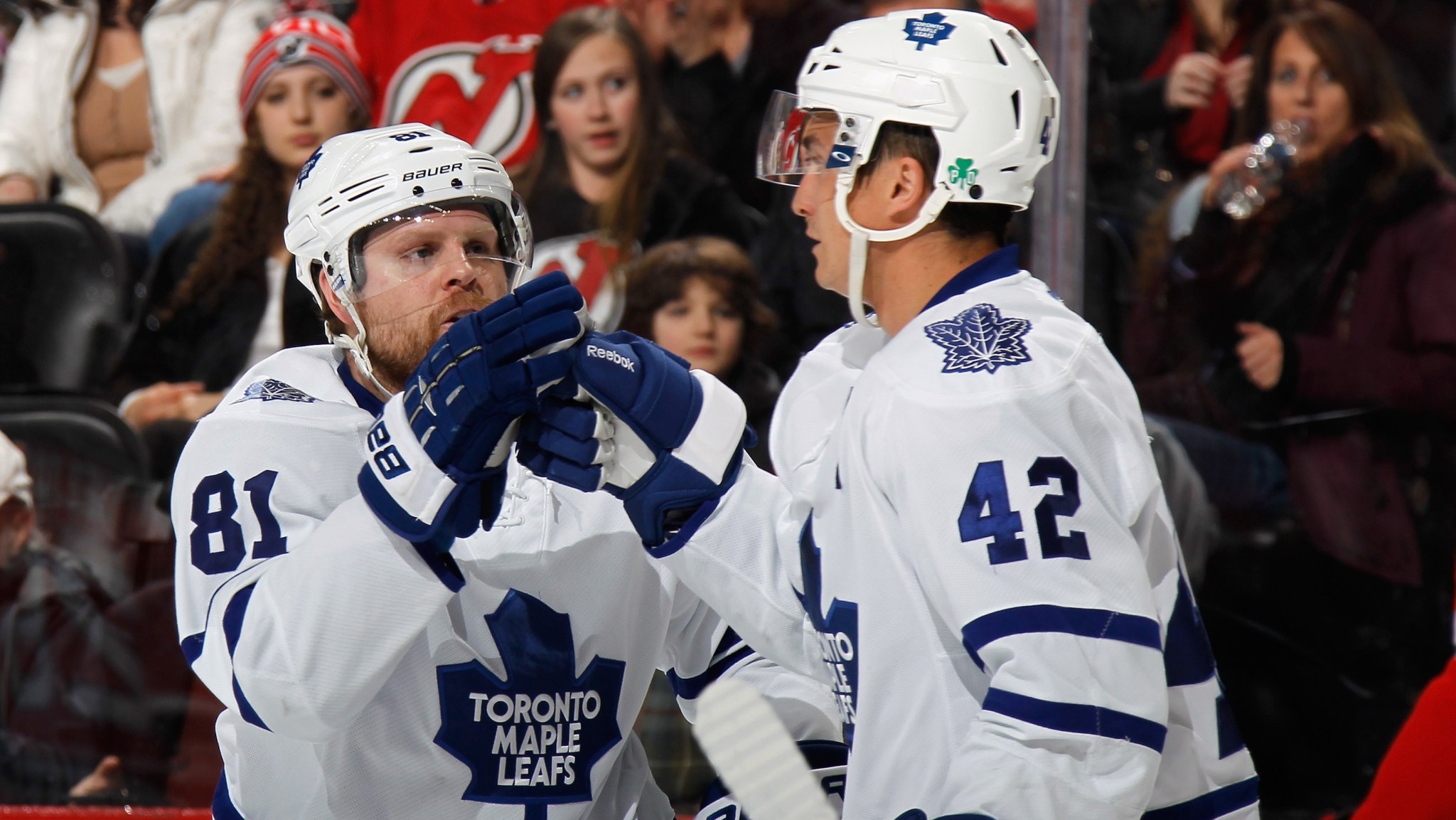 Two of this section’s favorite things: pro wrestling and P.K. Subban. Combine them, and you’ve got yourself a winner.

"If you smell what The Rock is cooking." – @subbanator / @therock

Nathan Beaulieu was pretty good, too. Now let’s go for the hat trick and see if we can get Carey Price to do the whole limousine-riding bit.

The second star: this Predators fan

Look out, Dancing Kevin, the next generation is coming for you.

The Panthers goalie was beaten glove high on Tuesday, which isn’t all that unusual except that it was from center ice. No problem, though — he’s got it all figured out.

Today is Friday the 13th, which is important only if you happen to be a superstitious weirdo. And if you are, then you’re really going to like this week’s obscure player: former Blues and Rangers goalie Gilles Gratton. Or, as he was affectionately known, “Gratoony the Loony.”

Gratton was drafted by the Sabres in 1972, but jumped to the WHA, where he played for Ottawa and Toronto. He eventually made it back to the NHL for two seasons starting in 1975, playing a few games for the Blues and then spending a season as the part-time starter in New York. His career NHL totals: 47 games played, 13 wins, and a goals-against average north of 4.00. If you’re old enough to have been around during that era, you might best remember Gratton for his crazy tiger mask.

The mask wasn’t the only thing that was crazy. Among the stranger stories about him: Gratton believed that he’d lived previous lives; he once told a confused Marv Albert he’d been a Spanish count who’d stoned commoners; he liked to hang out naked after practice; and he once sat out a game because the moon wasn’t properly aligned with Jupiter.

There was even a story of him missing a start because of a sword injury that he said he’d suffered 500 years ago. That last one comes from this screenshot from an unknown book I once found on Reddit, so it’s pretty much guaranteed to be 100 percent true.

Gratton left hockey after the 1977-78 season. He now works in the sports memorabilia industry. No word yet on what he plans on doing in future lives.

With the trade deadline less than three weeks away and one blockbuster already in the books, the rumor mill will be going full tilt from now until the dust clears on March 2. Expect to hear all about which players are in demand, which ones are being shopped, and which are untouchable.

That last group is the one we want to talk about today, because “untouchable” has become one of the most overused phrases in hockey. Do you remember what “untouchable” used to mean? It meant a player who literally couldn’t be traded, under any circumstances. They were just too integral to a franchise’s very identity to even consider it, no matter how lopsided the offer. If the player’s name was so much as uttered, the conversation was over.

Only a tiny handful of players ever qualified for “untouchable” status. Steve Yzerman in his final years in Detroit, and probably Nicklas Lidstrom, too. Joe Sakic at some point, maybe. Mario Lemieux in Pittsburgh, because he owned the team. Wayne Gretzky in Edmonton, right up until he was traded after all. There were others, but not many.

At one time, if you said a player was untouchable, you were saying that you wouldn’t trade him for Jonathan Toews, or Steven Stamkos, or Henrik Lundqvist. You wouldn’t trade him for the Sabres’ top pick in this year’s Connor McDavid draft. If the Penguins called up and said, “We’ll give you Sidney Crosby, Evgeni Malkin, and all of our draft picks, and we’ll retain salary and take back bad contracts to make the cap hit work, all for this one guy,” you’d hang up the phone.

That’s untouchable. Your second-pairing defenseman with the decent contract is not untouchable.1

These days, when we say “untouchable” what we really mean is “unlikely to get traded under current circumstances.” So let’s say just that instead. It’s maybe a little wordy, but it’s better than taking a term that used to mean something and turning it into more meaningless deadline-day hyperbole.

What has Don Cherry Gone and Done Now?

This week Don Cherry created a controversy over seal hunting, which is probably about the most Canadian sentence that’s even possible.

Here’s how it happened. On Saturday’s edition of Coach’s Corner, Cherry took a playful shot at Ron MacLean for ordering a seal burger for lunch. “What are you, a savage?” Cherry mocked. “A barbarian?” It was a throwaway line, and they quickly moved on, but the damage had been done, and it was no laughing matter. Seal hunting is a controversial topic in Canada, and many viewers were furious that Cherry would even appear to condemn it. Canada’s minister of environment even labeled Cherry’s comments “hurtful and insensitive,” and called on him to apologize. (Yes, Canadian politicians all watch Don Cherry. Don’t act like you’re surprised.)

Cherry eventually did apologize, taking to Twitter to offer an extended explanation.2 It wasn’t Cherry’s first multipart animal-related tweet storm, and at least this one didn’t end with a bee attack or a dead goldfish. It also seems to have at least temporarily put an end to calls for him to be fired.

As of press time, Cherry had not yet commented on how he feels about these guys.

Last week, we broke down a terrible overtime call in an old Jets/Blackhawks game. As several readers pointed out, I was remiss in not mentioning the names of the two outraged announcers in the clip: legendary Blackhawks duo Pat Foley and Dale Tallon.

• So it’s January 22, 1996, and the Hawks are in Ottawa for a meaningless regular-season game that absolutely nobody will remember, except for Senators defenseman Sean Hill, because he is about to have something very bad happen to him.

• By the way, normally I write a bunch of jokes for these things, but I honestly don’t think I can be funnier than Foley and Tallon are about to be here, so I’m going to mainly just quote them. Thanks for making my job easier, Pat and Dale!

• The puck comes to Eric Daze in the slot, and he fires a quick shot that Hill gets in front of. Pretty standard stuff. But Hill stays down, and he seems to be in some discomfort.

• “Sean Hill blocked that in a bad spot,” says Foley. What, in front of his own net? That’s a great spot to block a shot! Pat Foley doesn’t know anything about defensive positioning and/or there’s some other explanation that we’re a few seconds away from seeing.

• Tallon takes over to narrate the replay, and he’s concerned about Hill’s knee or calf. That seems like a reasonable theory, since as he points out, there’s not much padding there. Let’s just get one more look at it to confirm.

• No, no, it does not. In the second angle, it kind of looks like Hill takes that point-blank wrist shot directly in the package. I’m just going to roll around on the floor for a while with sympathy pains. Guys, feel free to join me. Ladies, feel free to laugh at us.

• And here it comes. Everyone take a moment to prepare yourself. Feel free to hit pause and walk around the room a bit to clear your head. And here we go …

• At this point we literally get 20 seconds of near silence, although if you listen carefully you can hear Tallon and Foley laughing hysterically in the background. This honestly might be my favorite moment in sports broadcasting history. I think the countdown goes like this:

2. Every word Bob Cole has ever spoken.

• I like how they fire up a new replay in the middle of all of this. Smooth, Mr. Director. Just roll the clip again, and maybe viewers won’t notice that the announcers have gone AWOL because they’re laughing too hard at a wiener pun.

• “What passing on that sequence, though, huh, Dale?” I love these guys so much.

• Oh, by the way, Hill is just making it to the bench now, because this was all excruciatingly painful and we’re terrible people for laughing at it. Fun fact about Sean Hill: More than a decade later, he became the first player ever suspended from the NHL for failing a PED test. Personally, I think if you take a hockey puck in the pills, you should get to take free PEDs for life.

• “There goes his broadcasting future. His voice just went up about four octaves.” And with that, we’re done here.

Pat Foley is still doing play-by-play for the Blackhawks, and last year he achieved the profession’s highest honor when he was presented with the Foster Hewitt Memorial Award at the Hockey Hall of Fame. Dale Tallon was a longtime NHL defenseman, perhaps best remembered for being the second overall pick in that bizarre spinning-wheel draft in 1970. He went on to join the Blackhawks front office in 1998, eventually becoming general manager, and would build much of the roster that won the Stanley Cup in 2010 and 2013. He’s currently GM of the Florida Panthers.

To this day, both Foley and Tallon continue to spend every waking moment laughing hysterically about “wee-knee.”