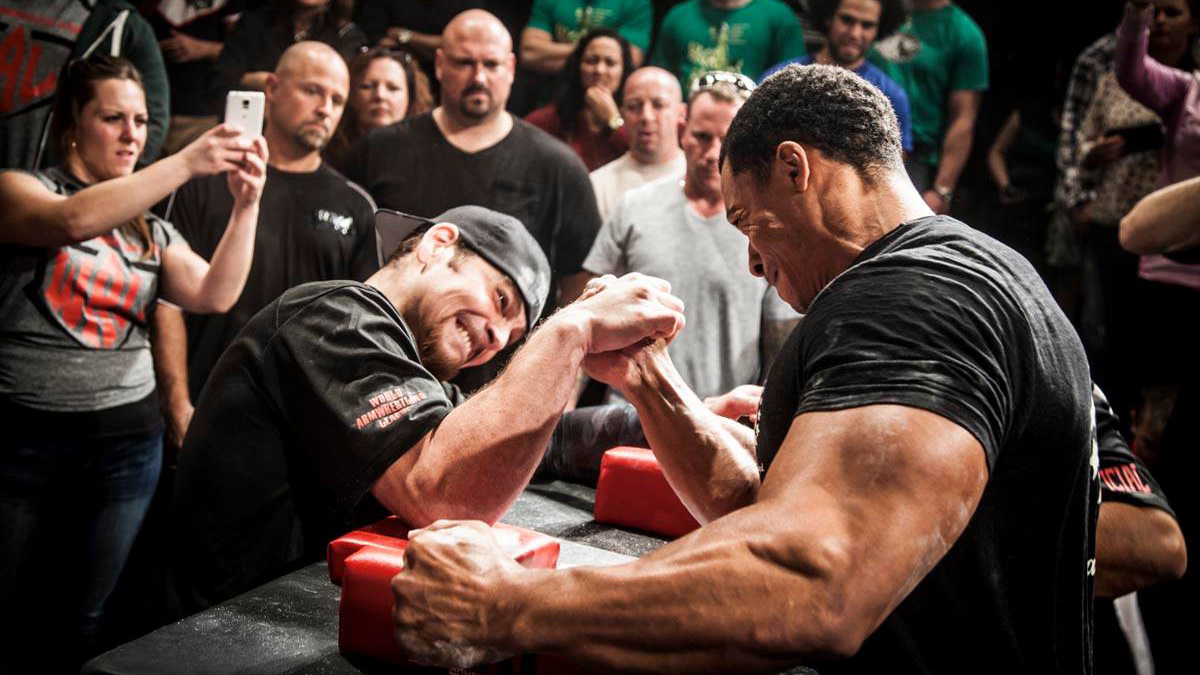 Welcome to the World Armwrestling League 2014 Championship. Larratt is a Canadian special forces veteran who has taken a yearlong sabbatical to pursue his dream of professional arm wrestling. He’s been on the circuit for years, but now, in the WAL, he’s getting a chance to make a career of it. All the guys (and gals) on the WAL roster have day jobs — tire builder, retired corrections officer, chemistry teacher — and all of them have very real uses for the $10,000 that is each division’s top prize.

Oh right — the divisions. “Pulling,” as insiders call it, has rules and weight classes, starting at 165 pounds and going up to super heavyweight. There are divisions for left arm and right arm contests. The championship rounds are best two-out-of-three, and referees keep watch from both sides of the match to spy illegal grips and lifted elbows. If the competitors’ hands slip out of each others’ grasp, the match is restarted, this time with leather laces binding them together. You might recognize some of these rules from Over the Top, the laughable (or legendary) 1987 Sylvester Stallone movie.

To be fair, there’s a lot of ’80s nostalgia in the WAL. As a television spectacle, it’s a throwback to an earlier, wilder era of ESPN, when Magnus Ver Magnusson was performing feats of strength and all variety of obscure competitions dotted the late-night sports TV landscape. The WAL World Championship premieres tonight, during a weekend mostly reserved for NBA All-Star festivities. It’s on ESPN2, after Horizon League basketball and Friday Night Fights, before a 30 for 30 rerun. So for all of its shared heritage with second-rate Stallone movies and a short-lived AMC reality show, the question arm wrestling has to answer is whether it’s a more enticing viewing option than a mid-tier college basketball game. Let me tell you right now: It is.

Maybe it’s the stack of cash on the table between the gorilla-armed competitors in each match, or the constant intonation of the $175,000 total pot for the night. Maybe it’s the sincerity with which the wrestlers attend their craft. Maybe it’s the psychological warfare and the gamesmanship — when hands “slip apart,” it often feels like a deliberate move by one guy to preview his opponent’s technique. But the most appealing aspect of watching arm wrestling is the humanity — the grimaces and sweat and yelling wives. It’s the moment after a tough match when two men engage in a tender hug, rubbing each others’ heads with their off hands, their bloated arms still strapped together.

Game of Arms — AMC’s reality show that ran for one season1 — got the sport exactly wrong. Despite the grunting and physical toil, the production is as much bluster as the fighters’ trash talk. Game of Arms feels like a History Channel reenactment of an imaginary Ozarks bar fight. What matters about arm wrestling — like those World’s Strongest Man contests that inhabited ESPN2 in the days of yore — is its testosterone-fueled relatability. In arm wrestling, the worst thing you can do is go the route of slow-motion zoom-ins, dramatic background music, and quick camera cuts; anything that distracts from the reality of the moment demeans the whole enterprise. Which is to say, don’t make it look like Over the Top.

WAL manages to pull this off with an odd grace. It has the meandering feel of those old strongman shows, like you’re ambling through a stock show and seeing things almost incidentally. But there’s also the eureka moment of those first days of UFC on Spike TV, when high production values were first brought to MMA and you’d find yourself watching hours of meaningless brawling just because jt was there. (And like UFC, the World Armwrestling League holds your hand through the basic rules while you pick up the finer points almost subliminally. The first time the ref said, “Square up, square up, don’t go over the thumb,” I cocked an eyebrow. By the end, I was screaming about this technique.)

On a human level, the show can be quite moving. They let the pullers brag, they take us into their workout routines, and then we see them in action, trembling, veins bulging from forearms, spitting air like a busted tire. As Mrs. Larratt put it: “You already own a piece of his soul. Take the rest, baby.” WAL wants to fashion arm wrestling into a participatory sport for average folks, like an edgier Tough Mudder. To kick off next season, it’s hosting open contests in 100 cities. And all of that will lead back to a championship, where the grand champion in each division gets a cash prize and the arm wrestling version of a title belt — an oversize, metal-plated Thor’s hammer.

It’s perfect: the symbol of the average joe becoming a god. And so what if the prize money’s not in the seven figures? That’s exactly the point. As one champion said in his postmatch interview: “The money’s gonna be gone soon — I got kids in college. The hammer I’ll have forever.”

Love Knows No Offseason: More Valentines From College Football’s Family to Yours

NHL Grab Bag: No One Is Untouchable