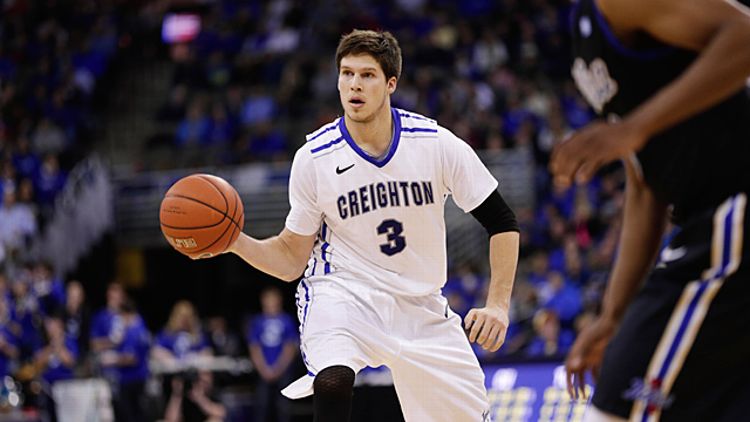 As a player who has been on the radar of NBA teams for quite some time, Creighton’s Doug McDermott has faced as much scrutiny as any prospect in the draft. Three years of college basketball is ample time for NBA scouts and executives to pick apart the weaknesses of any player, sometimes at the risk of forgetting about his strengths. Entering his senior season, McDermott is no exception to this dynamic. Lots of questions about his athleticism, position, body, and rebounding have piled up during his dominating run at Creighton.

Despite all that, McDermott looks poised to maintain his extremely high level of production for his final year in school. He has plenty of positive attributes to bring to a team at the next level, but the tricky part is determining which ones will carry over to the NBA. It’s performances like his 37-point outburst against the University of Missouri–Kansas City on November 11 that showcase McDermott as both a known commodity and prospect whose draft stock will likely remain fluid right up until his name is called in June.

Here is what I learned after going to Omaha to take a live look at McDermott earlier this month.

In terms of scouting potential prospects, a player with one outstanding skill is often more attractive to teams than one who is merely above-average across the board. McDermott’s outstanding skill is his outside shooting. His 5-for-10 performance from 3 against UMKC mirrored his past two seasons from 3, in which McDermott hit nearly half his shots on a high volume of attempts (McDermott averaged 4.4 per game during his junior year).

What’s interesting about McDermott, however, is that his shooting mechanics aren’t flawless in the classic sense. McDermott has an abbreviated follow-through (not the picturesque “fingers in the rim” finish), a low-arcing trajectory, and — at times — a backward lean upon release. These minor issues aren’t overly concerning, as the key factors — a consistent release point, quick feet, and good backspin — are all things McDermott possesses. Even the backward lean will help McDermott gain separation from the longer defenders he’ll see in the NBA, as long as it doesn’t mess too much with his balance. (Hedo Turkoglu has shot well over his NBA career doing the same thing.) Against UMKC, those quick feet were on display as well. Almost half of McDermott’s attempts came after relocating against the UMKC zone to a position outside the 3-point line.

As an NBA executive watching McDermott against the Kangaroos pointed out, there have been plenty of great shooters — Peja Stojakovic, Reggie Miller, and Larry Bird, to name a few — with unorthodox mechanics. That doesn’t mean McDermott is a lock for such lofty heights, but with such a large sample size of success behind him, there’s very little to suggest he won’t enter the league and become an instant threat from outside.

Listed at 6-foot-8 in most media guides, McDermott appears to be far closer to 6-foot-6 or even 6-foot-5 in person. His wingspan also seems rather ordinary. The NBA is a league filled with freakishly long and athletic players at the two positions (small and power forward) that McDermott is likely to play. How he measures out at the Chicago pre-draft camp will go a long way in dictating not only where he gets drafted, but how high his potential ceiling will be at the next level.

During the Orlando summer league in July, an NBA GM remarked that he valued players who consistently race down the floor in transition. With more and more teams adhering to offensive principles that emphasize creating shots in the first third of the shot clock, something as simple as running the floor hard has become a key skill. Against UMKC, McDermott showed off this “skill” by consistently racing toward the hoop after his team secured a rebound, looking for early post-ups against opposing big men.

McDermott won’t ever be asked to make rim runs like that in the NBA, but his effort suggests that he will run the outside lanes hard in transition, moving quickly to a threatening position in the corner or on the wing early in the shot clock. Although there are no stats that can directly capture the effect of such movement, it is certainly something that will provide value to NBA teams — especially in combination with McDermott’s elite shooting.

McDermott is the typical positional tweener. Too small to play at the 4 and too slow to play on the wing, McDermott will never be anything better than average as an individual defender. (And that might be generous.) To make up for it, he will need to hang his hat on being a great positional and team defender. Against UMKC, the results in this area were mixed. McDermott had decent awareness of both his man and the direction of the play at times, but it didn’t happen consistently enough to suggest he’ll be anything close to the second coming of the Thunder’s help defender extraordinaire, Nick Collison.

His pick-and-roll coverage calls — an extremely valuable part of a team’s defensive success — were often late as well, leaving teammates on the ball unprepared to execute the technique required to stop the play. This is hardly a black mark for McDermott, as most college kids struggle communicating on the defensive end of the floor. But given his athletic limitations and the fact that he’s a senior, McDermott needs to be ahead of the curve in this area, rather than just ordinary.

Thankfully, both these things can be trained and improved in an organization with a great culture and coaching.

With such a long track record, one monster showing against inferior competition followed by a solid performance in a road win against St. Joe’s isn’t going to move the needle much for McDermott. The big question of what his best spot will be — on the wing or as a stretch big in the frontcourt — is something that will likely linger until McDermott gets into the league.

What’s interesting is that each standout performance — like the one against UMKC — will continue to build on McDermott’s already stellar reputation. This is both good and bad. (Yes, I know it’s weird to think of 37-point games being “bad” things in any context, but bear with me.) For every triumph McDermott has in the college game, the resulting hype could leave him vulnerable to unrealistic expectations at the next level.

If he’s selected in the first round by a team far from contention and asked to carry the same load he does for Creighton, McDermott could find himself in a similar situation as Adam Morrison. While injury and approach certainly played a role in his professional struggles, Morrison was also an elite player at a smaller school who entered the NBA with the task of uplifting a brutal Charlotte Bobcats franchise early in his career. Morrison just simply wasn’t equipped to score on NBA defenses like he did on college ones.

McDermott should hope that some overzealous lottery dweller doesn’t select him with hopes similar to what Charlotte had for Morrison, because — watching him live — I saw enough signs to point to a more specialized role for McDermott in the NBA. Coming off the bench to break up more traditional starting frontcourts, similar to how the Spurs use Matt Bonner, seems to be where McDermott would experience the most success. But it will be interesting to see how a few more dominating performances, like the one against UMKC, will affect where the talented McDermott ultimately ends up in next year’s draft.