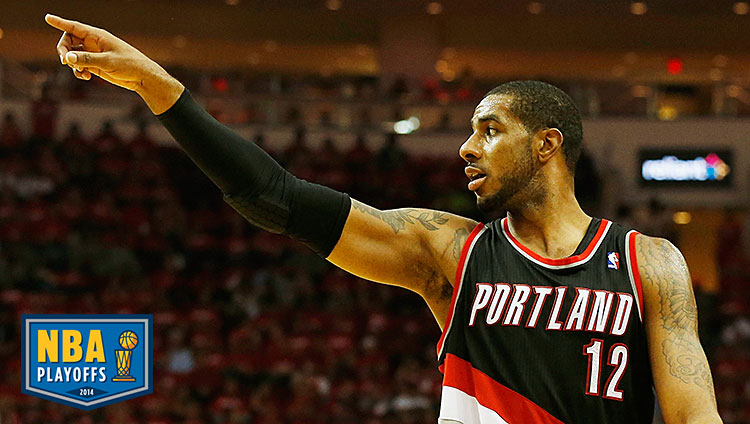 “The World Wasn’t Created in a Deluge. It Was Covered by It.”

netw3rk: LaMarcus Aldridge’s jumper has reached Waterworld levels of wetness. Kevin Costner with vaguely vaginal gills, swimming through Aldridge’s midrange turnarounds, two of every animal traveling by boat across LaMarcus’s jumpers in hopes of one day repopulating the globe.

After LMA’s 46-point, 18-rebound outburst in Game 1, the Rockets managed to hold him to a paltry 43 points on 64 percent from the field in Game 2. The irony is delicious: the analytics-inspired layups-and-3s Rockets, laid low by an avalanche of midrange 2s. Aldridge did most of his damage from the left block, of course, but there was also the odd layup and the above defamation of Omer Asik’s mind, body, and spirit.

Asik stated before Game 2 that “the first thing is to stop LaMarcus Aldridge.” Kevin McHale agreed: “We are going to do some stuff differently. You watch the game and find out what it is.” Well, after watching the game, the “stuff” was this: going twin towers with Asik and Dwight Howard (which kind of worked early on); trying to run doubles at LMA to force him to give up the ball (which didn’t work even a little); and, eventually, praying the deluge of 15-footers would somehow relent. It never did, and the Rockets find themselves down 2-0.

And Now a Message from Some Blazers Fans

LaMarcus Aldridge has def been eating his Wheaties! He putting on a show

Kinks in the Machine?

Andrew Sharp: I’m still too scared to doubt the Spurs. Even after they looked suspiciously out of it in Game 1 and downright awful in Game 2. This is not the Pacers, and we do not tell jokes when this 1-seed gets embarrassed at home in the playoffs. We don’t wonder about team chemistry or nitpick lineup decisions. They’re the Spurs. The answer to “Will they get it together?” is almost always yes. They will get it together and make you feel stupid for ever doubting them. Remember the Warriors series last year?

But still. I was told to expect a blowout here. The sad end of the Mavericks. The Spurs swept the season series this year AND last year. Go to ESPN’s series page. Only a single writer out of 20 picked this series to even see six games. The Mavs were 9.5-point underdogs in Game 1, and 8-point dogs Wednesday.

And … the Mavs won by 21 last night. They led for most of the second half in Game 1, too, until the offense fell apart at the end.

There are sexier series out there — LaMarcus Aldridge was the definition of NSFW last night — but let this be an alert. This series is better than people think. Monta Ellis is doing Monta things, Vince Carter’s hobbling his way into your heart, Devin Harris is hitting for 18-point games like it’s 2008 …

Wait. That sentence was a horrible endorsement.

How ’bout this: Shawn Marion and Rick Carlise’s defense has kept the Spurs’ offense under control, the Mavs are pushing the best team in the West, the crowd will be on bath salts in Dallas this weekend, and Dirk still hasn’t gone off. I’m still too much of a coward to doubt San Antonio, but the Mavs could make this a lot more fun than expected.

Danny Chau: The Bobcats lost last night. In the first half, they trailed by as many as 16; in the second, they trailed by as many as 14. Miami’s lead was discouraging, but was never allowed to swell into a demoralizing one. They stormed back. Then the lead swelled. Then they stormed back. Then the lead swelled. They just kept storming back. Al Jefferson felt another tear in his plantar fascia, and the negative mobility he had went even further in the red. He was a human emperor penguin out there, and yet there he was, with 18 points and 13 rebounds, because he doesn’t know another way. The Bobcats cut the lead to within four points 10 times in the game. Michael Kidd-Gilchrist found momentary salvation last night, playing one of the best games of his NBA career, logging a 22-and-10 double-double. But the Bobcats lost. By four.

They came one miracle short of pulling off something truly special. What might’ve been a miracle in Kemba Walker’s hands with 10 seconds left in a three-point game turned into a couple pump fakes, some fumbling, and a Chris Douglas-Roberts turnover to seal the game for the Heat. The ball never touched Walker’s hands — the hands that cut the lead to one with 11 seconds left with a 3 that, in the moment, was probably more satisfying that any of the late-game sorcery he’s summoned in the past. The Bobcats lost the way the Bobcats lose. So then why can’t I stop smiling?