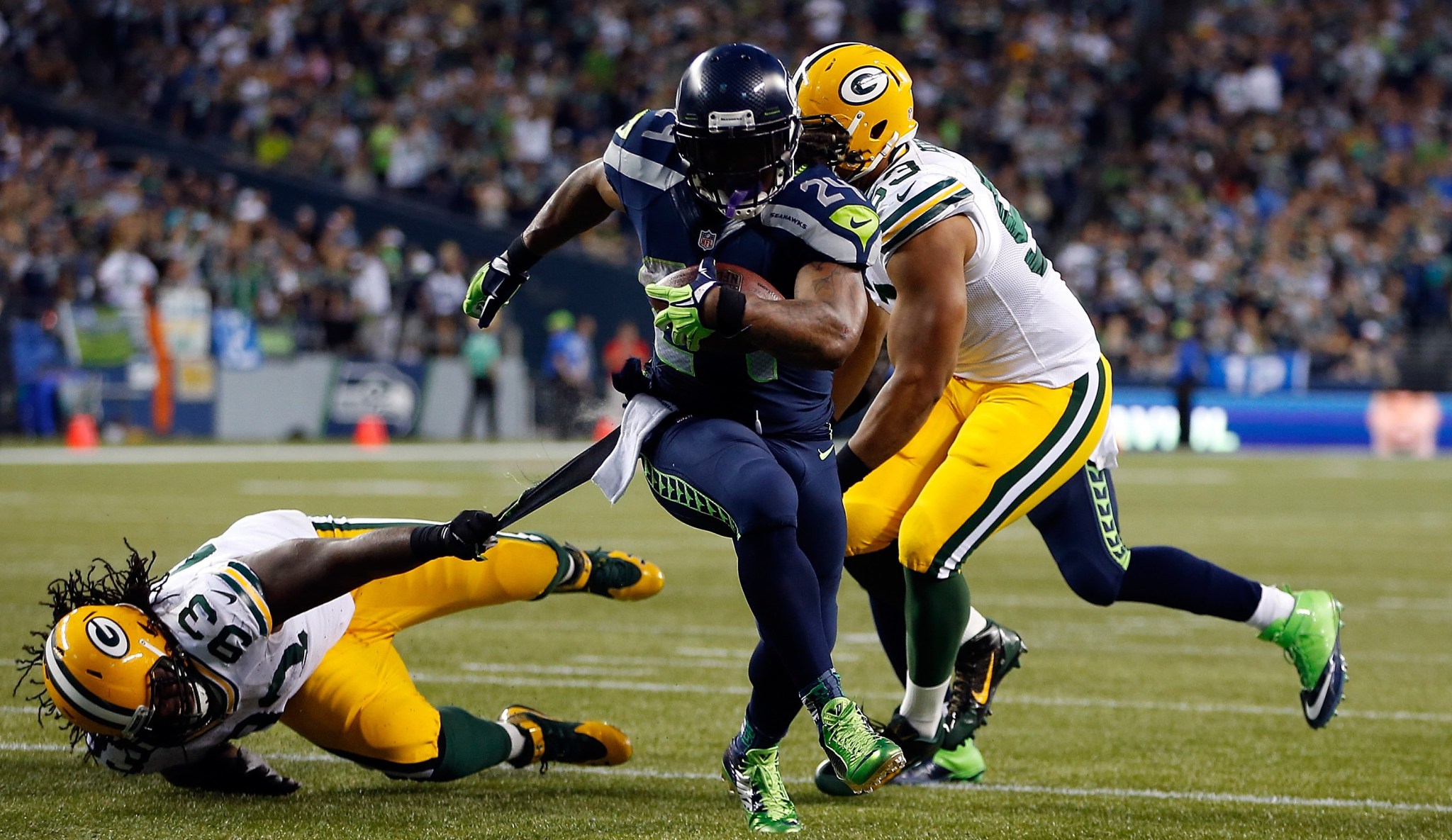 It took a little while, but eventually the first game of the NFL season just turned into a blur of Marshawn Lynch dump-trucking his way through the Packers’ front seven and Percy Harvin sprinting through the defense 10 yards at a time on jet sweeps and bubble screens that seemed a little more unfair every time they ran them. It was glorious. And ruthless, and clinical, and lots of other adjectives even Packers fans can’t really disagree with.

The rest of the Seahawks were pretty great, too — the defense mauled the helpless Green Bay offensive line, Russell Wilson led the offense up and down the field, and the new Seattle offensive line was probably the MVP — but I talked about them yesterday and we’ll probably keep talking about them all year.

This is just a quick note about Marshawn and Percy. There are obvious reasons these guys are awesome — go back and reread the first paragraph — and then there’s bonus content elsewhere. This old Kenny Mayne video with Marshawn surfaced last night. I also found out that when Percy was at Florida, the strength and conditioning coach tried to make the team run stairs, and Percy said, “This shit ends now.” The team played basketball the next day. I love both of these guys forever. But there’s also something more general here. They couldn’t be any more different on the surface, but what they have in common is everything that made last night so much fun.

For one thing, they both came from bad situations (Buffalo and Minnesota) where they had trouble living up to their potential, and then eventually became expendable when their teams realized there were cheaper ways to get the same production (Fred Jackson, Cordarrelle Patterson). But most importantly, both of them are pretty much living on borrowed time in the NFL.

Everyone who’s watched these guys for the past three years has either been (a) waiting for another injury (Percy), or (b) waiting for age to set in and mortality to come with it (Marshawn).

It was only a month ago that people were wondering if the Seahawks would be just as good without Marshawn. Skeptics pointed to his workload over the past few years, his underwhelming numbers in the Super Bowl that Seattle dominated anyway, his age, his salary next to a bunch of cheaper backups waiting to take over … Even if you were a believer in all things Beast Mode, some of these points were hard to disagree with.

It’s the same with Percy. Nobody can argue with his talent, but at this point, it’s hard to stand out there on the front lines and argue with anyone who says he won’t make it through a full season. He’s played a full 16 games once in his career, and last year he missed the entire regular season, came back for a quarter, then got concussed and missed another three weeks. I hyperventilate every time the Seahawks hand him the ball. Clay Matthews almost decapitated him last night. But he didn’t, and Percy had 100 all-purpose yards before halftime, and at that point Marshawn was just getting warmed up on the way to 110 yards and two touchdowns.

"I saw supposedly some of the best players in the league not want to tackle Marshawn Lynch." — Seahawks DE Michael Bennett

There are a thousand things I love about the NFL and probably close to a thousand things I hate, but honestly, it’s too exhausting to keep parsing all of this internal conflict with pro football. I did that last year. For now, last night helped me remember one simple pleasure that never gets old.

The NFL is where we watch a sport that says there’s a structure to how things work, with schemes that can’t be broken and a harsh reality that always wins out in the end — and then we watch certain players who go out and defy all of that. That’s what Marshawn and Percy represent. Because aging workhorse running backs aren’t supposed to be this valuable anymore, and pint-size wide receivers aren’t supposed to survive cutbacks through a jungle of linebackers. They are two players cheating different kinds of death, which makes it that much cooler to watch them deliver death blows in the meantime.

All the skeptics will be proven right eventually, of course. I know. The pessimists always win in the end. Marshawn won’t be indestructible forever, and soon he’ll stop running over people and probably end up getting cut. Percy will get hurt again and eventually stop being twice as fast as everyone else on the field. Maybe it’ll happen later this year, maybe next year.