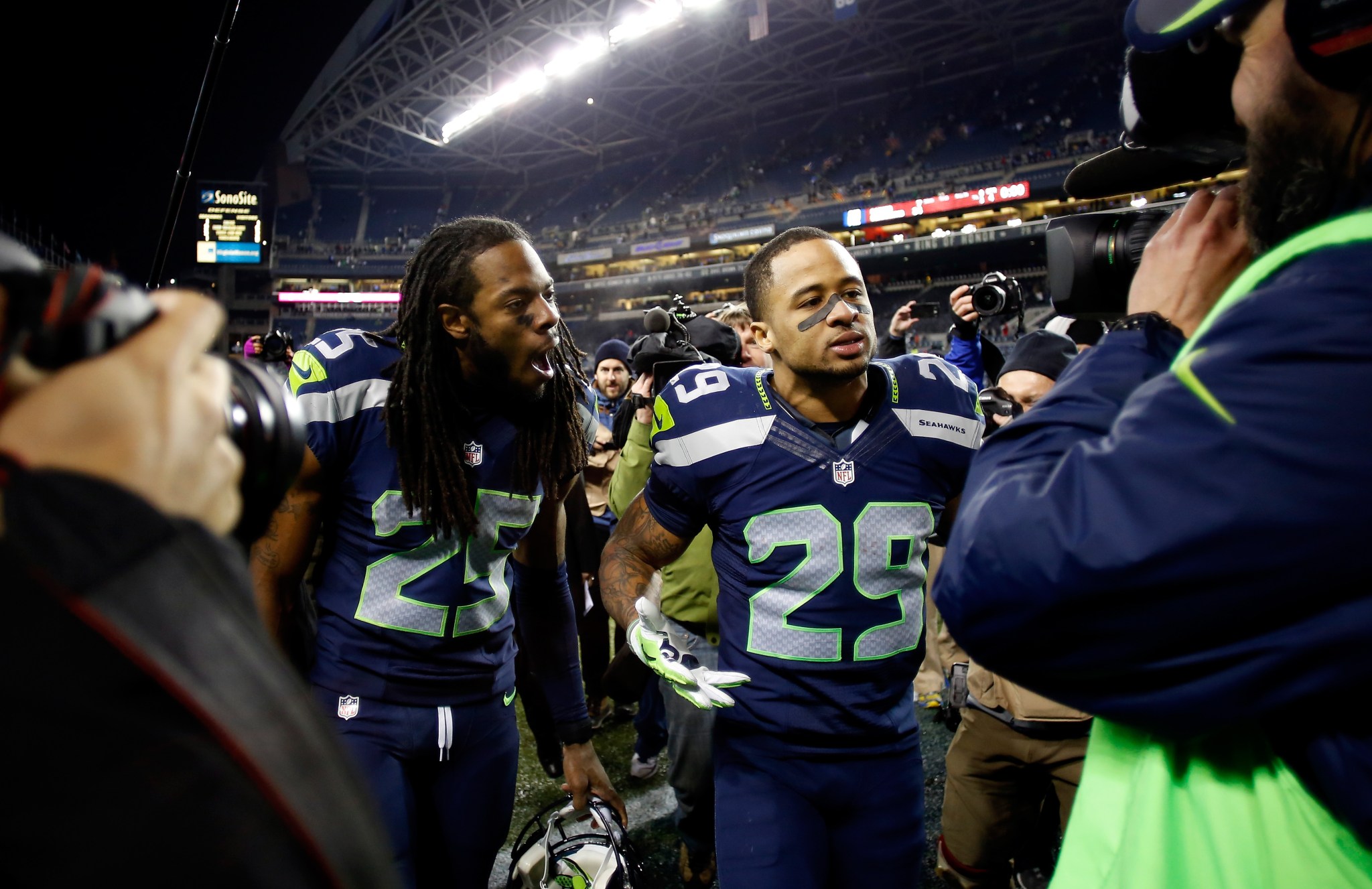 The Seahawks are not normal.

Just look at Earl Thomas. “I’m married to this game,” Thomas told a reporter from the Seattle Times recently. “You want to treat your wife right, and I treat her right to the fullest.”

Can he be the greatest safety of all time? “This is a lonely road. I already made peace with it. I already took that challenge. Ain’t no turning back now.”

Later, he described an accidental hit on a backup, in a no-contact drill: “He walked back and was like, ‘Man, you punch hard.’ But I’m a competitor. Really and truly I know somewhere down in my family there is warrior blood. There’s gotta be.”

[Backs away slowly from Earl Thomas.]

These people are insane. The whole defense is like this.

I already mentioned what Kam Chancellor said a month ago, when he returned to training camp and announced, “People don’t know it because I smile a lot, but anytime I’m on the field, I’m in a dark place.” And then: “I look at myself as a machine. And the machine has to get back on the field to perform with his troops and do battle.”

Warrior blood. Machines. Married to the game. Dark places. Those are the safeties receivers have to deal with every week.

Richard Sherman said today he's glad the NFL is emphasizing illegal contact and holding "because it will give people less excuses.''

Nobody bothers keeping it political. Everyone on that defense is fearless, angry, and completely divorced from reality. Except everything they say has been borne out by reality so far.

Tonight’s just one more chance to keep it going. Football is back, and it all starts in Seattle. The Packers are asking a rookie from Ohio State to play center against the Seahawks’ defensive line, specifically defensive tackle Brandon Mebane.

Someone mentioned this to Seattle linebacker Bruce Irvin, and he said, “If I’m a rookie and I’ve got Brandon Mebane my first game — he’s one of the best nose tackles in the league — it’s going to be big for him. I’m gonna pray for him. It’s going to be a long night, man.”

This is Brandon Mebane. Also not normal.

There’s no shortage of people talking about how great the Seahawks are right now. But we should probably be talking more about this: They can still get better. There’s a chance the terrifying team from last year could get scarier, and that Super Bowl where they disemboweled the Broncos might have been less a culmination and more like an opening act.

This isn’t how the NFL is supposed to work. Right? Any football fan knows you shouldn’t pick Seattle to win the Super Bowl this year. Look at the recent history:

Half those teams missed the playoffs entirely, and not a single one made it back to the conference title game. It makes sense for a couple reasons. First, depth gets ravaged by free agency in the modern era, strengths get weaker, and schedules get tougher. All the things that broke just right the year before start going the wrong way. That’s just how the NFL works in the parity era.

That’s only part of it, though. The biggest reason it’s so rare to see title winners repeat is because it’s rare that Super Bowl winners are actually the most dominant team to begin with. Parity hits hardest in the playoffs. Were the Ravens really that amazing in 2013? Or the Giants the year before? Or those Steelers teams that got hot and ran the table? It’s a safe bet to doubt Super Bowl teams, because they’re rarely that much better than everyone else in the league. Take away a few key players and add a few injuries and tougher schedules to teams that were never quite that great to begin with, and of course they fall back to earth.

But the Seahawks are not normal. They really might be that much better than everyone else in the league.

To understand what makes Seattle terrifying, go back to the last team to repeat. The Patriots laid the blueprint for any would-be dynasties in the parity era. In 2001, New England used a ball-control offense and good defense to storm through the playoffs. They eventually suffocated the Rams’ offense just enough to steal a Super Bowl in 2001. At that point, their trademark was Belichick’s defense and Tom Brady making clutch throws. After one down year in 2002, it all hit another level. The defense was still pretty good, but the offense became the dominant weapon.

You could focus on the 2002 Pats season here, right after the 2001 Super Bowl — 9-7, missed the playoffs — as a reason to write off the Seahawks this year. But that’s missing the point. The Patriots turned into a dynasty because when one unit started losing pieces, the other was getting ready to grow into a monster.

Think back to that Patriots offense in their first Super Bowl run, and look at Tom Brady’s numbers:

They both played with coaches who didn’t ask them to do too much, had running backs who anchored things (Antowain Smith, Marshawn Lynch), and were protected by defenses that were good enough to win, as long as the QBs didn’t screw up.

For a little while the first two years, it seemed like Russell Wilson was destined to become something like a better version of Tim Tebow. He gets it, everyone said. He’s a leader, he sets the tone for everyone else, he protects the ball, he’s not flashy, but he makes big throws when you need him to … These are all code for “He’s not actually that great.”

People said this stuff about Tom Brady once. Then Brady grew into a completely different player, the Patriots’ offense grew with him, and they haven’t won fewer than 10 games in 10 years. Related: On 13 preseason drives this past month, Russell Wilson led the offense to nine TDs, two field goals, one missed field goal, and one punt. What happens if those numbers aren’t just a fluke?

Look at the rest of the offense. Percy Harvin’s healthy. Golden Tate and Sidney Rice are gone, clearing the way for Jermaine Kearse and Doug Baldwin — both young, and should be better than the guys they’re replacing. (Everyone is better than Golden Tate.)

Meanwhile, Marshawn Lynch is back, with Robert Turbin and Christine Michael behind him to make the running game even deeper. The offensive line was a mess last year — Russell Okung was hurt, Max Unger missed time, and it ended with Lynch having to create holes out of nowhere, and Wilson having to extend plays by running around and doing Russell Wilson things.

This year, the line has a new offensive tackle (Justin Britt) and a young guard with an amazing name who should be much better (J.R. SWEEZY), and Russell Okung is healthy again. Everything should be easier.

Even if Harvin gets hurt — basically an annual NFL tradition — there’s still enough talent everywhere else to keep the offense dangerous.

So what if last year was just the beginning? What if one of the greatest defenses in history keeps it going, and the offense is about to hit another gear? 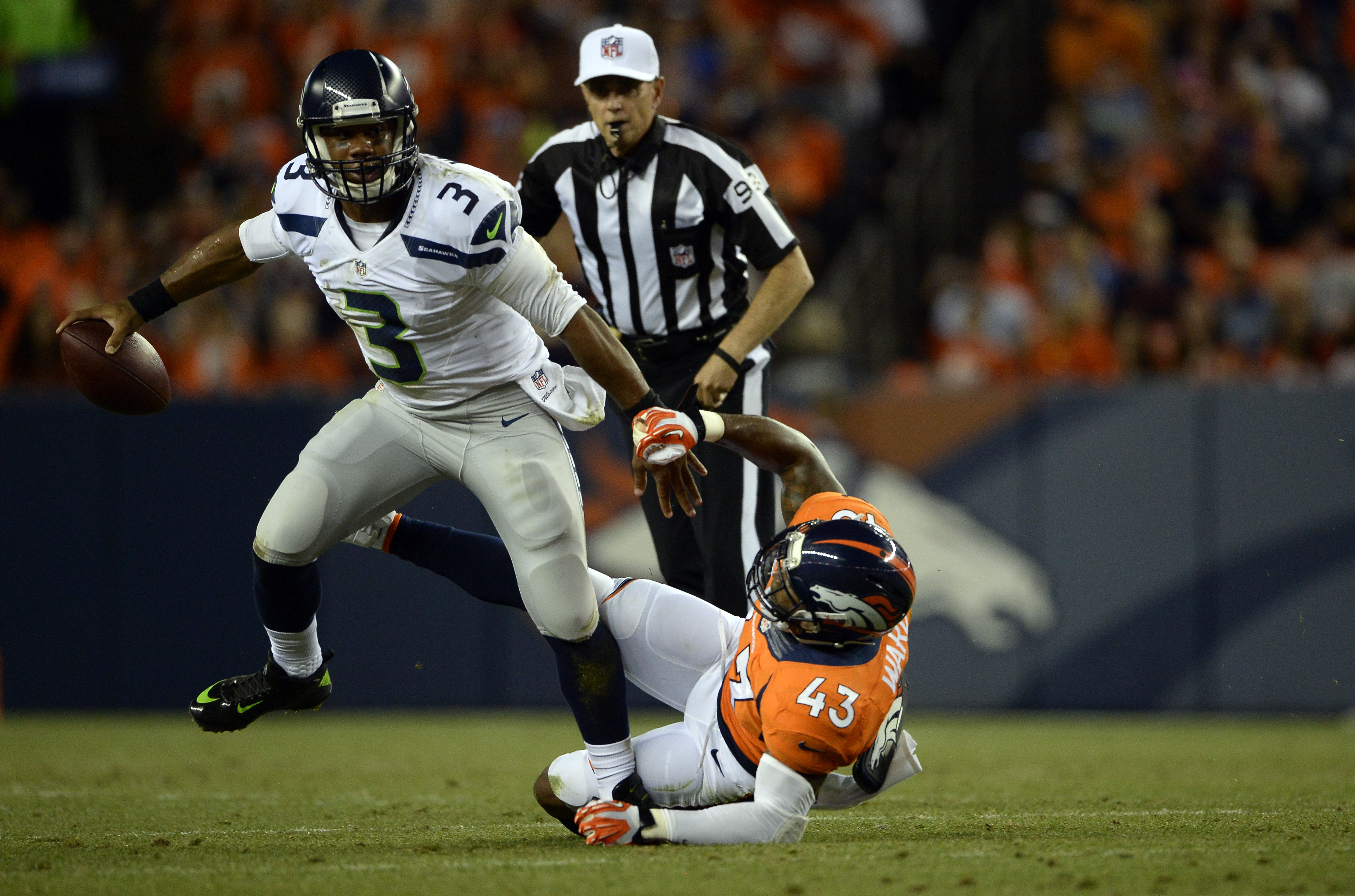 There are plenty of good reasons the Seahawks won’t win another Super Bowl this year. I know. Injuries can wreck anyone’s season, luck plays a role in any playoff game, and the rest of the NFC is loaded. Only four of 16 ESPN experts picked them to repeat. And it’s hard to argue against the history, with every other Super Bowl we’ve seen recently. Even if the Seahawks are the best team, that may not be good enough. Crazy things happen as a rule.

But the Seahawks aren’t normal. Parity didn’t apply last year, because they had too much talent across the board.

All that’s still true a year later. They’ve got a combination of proven veterans (Harvin, Lynch) and psychotic stars in the middle of their prime (the entire defense), plus young guys like Kearse, Turbin, Michael, Sweezy, and Wilson, ready to push all this to another level. Their biggest threat (the Niners) have questions on both sides of the ball this year, while their biggest weaknesses (passing, offensive line) look better than ever.

I don’t know if the Seahawks will win another title and turn one dominant season into something more like a dominant era, but it feels like we haven’t talked enough about how realistic this is.

For now, just pray for that Packers rookie.

The Pac-12 Is Ready for Its Close-Up