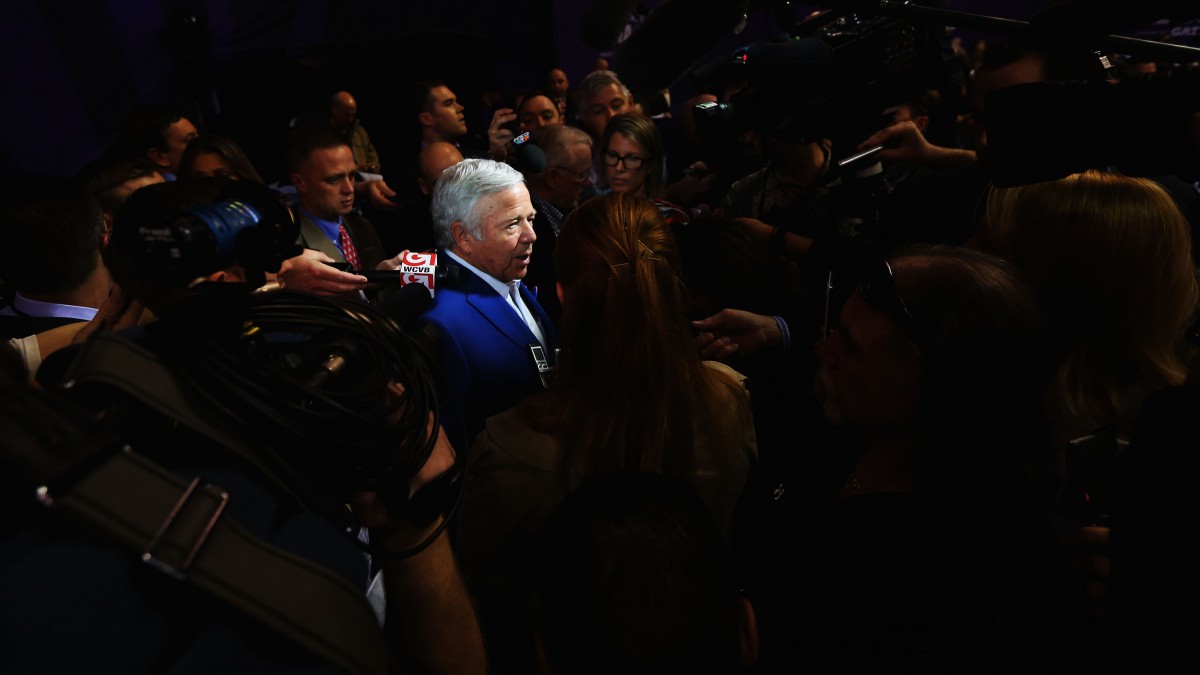 And all of that was before Belichick, who not three days earlier had said he didn’t know anything about how game balls are handled before games, came out and gave a learned disquisition on a variation of Amontons’s law regarding cold weather and the volume of air in the average football. I suppose, in the interim, he found a Rosetta stone for physics. Anyway, everybody kept talking.

Really, from the start, it has been a corked bat, a hockey stick curved in a bit too much of an arc, an emery board in a pitcher’s glove. That is all it’s ever been, and that’s the only way it ever needed to be talked about. But, as Amontons’s law tells us, the product of pressure and volume stays the same only when the temperature remains constant. But Super Bowl week is a typhoon of hot air all on its own, and with what has happened over the past week, to say the very least, the temperature has remained anything but constant. Therefore, neither the pressure nor the volume — in every sense of the latter — has remained constant. So, it’s helpful to focus on a couple of people who have been at the center of all the talking that’s been going on. One of them has done some remarkable talking of his own. The other has done very little talking, but what talking he has done has turned him into the second-biggest kabuki controversy of a week that already was thick with them. One talks, the other doesn’t.

In the years he has owned the New England Patriots, Robert Kraft never has put on a performance to match the one he put on when he landed in Arizona at the beginning of the week. All week, the New England spin had been ironclad; they did nothing wrong, and if you can prove they did anything wrong, go ahead and try. This had prompted a grotesque chorus of vaudeville-caliber outrage across all platforms of modern communications. The Patriots had declined to perform their part in the usual media morality play. And then Kraft pushed even more chips to the center of the table.

If the Wells1 investigation is not able to definitively determine that our organization tampered with the air pressure on the footballs, I would expect and hope that the league would apologize to our entire team and, in particular, coach Belichick and Tom Brady for what they have had to endure this past week. … I am disappointed in the way this entire matter has been handled and reported upon. We expect hard facts as opposed to circumstantial leaked evidence to draw a conclusion of this investigation.

This was a remarkable moment. Kraft was plainly calling out not only the media, and not only whoever it was in the league who’d been narcing out the Patriots on all offenses, real and imagined, but also commissioner Roger Goodell, to whose rise to his position of barely distinguishable leadership Kraft had been central. For most of the week, due partly to the fact that Goodell had spent the night before the AFC title game at Kraft’s home, the conventional wisdom was that the two of them would concoct some scheme through which the Patriots would be punished, but not severely. Which, frankly, is what would have happened anyway, had the country not lost its mind.

Kraft’s press conference did nothing if it did not change the narrative. Now, there was less room in it for huffing and blowing about the ethics of tampering with a football. At least on the surface, this became a very conventional American political power struggle. And that was something everybody could understand, and it seemed slightly more worthy of the amount of posturing that had been going on since the previous Sunday. Either Kraft was declaring his independence with a very loud bang, or a fix already was in and all of his denunciations were for show. In either case, all of that free-floating self-righteousness was now unmoored from the deflating deflated-football scandal. It had to light somewhere. Luckily, there was someone who invited it right in to stay awhile. 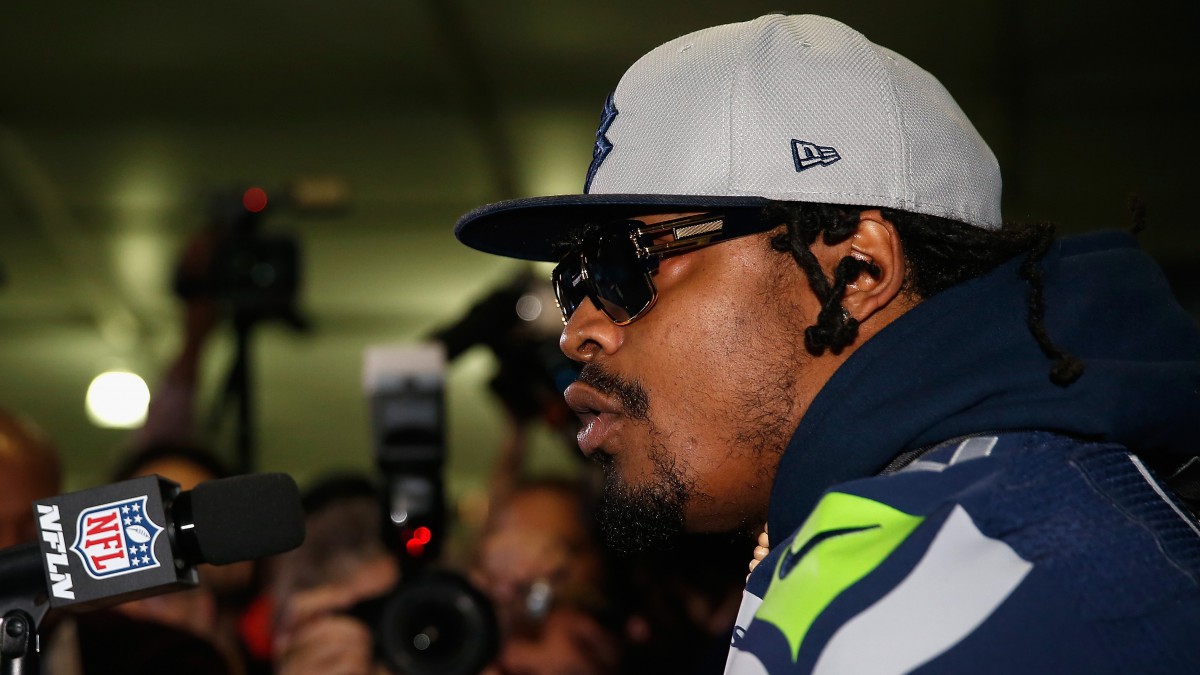 Watching Marshawn Lynch run with the football these days is like watching Jim Brown in short bursts. (Brown ran like Lynch all the time, and that’s why he’s the greatest football player who ever lived.) Watching him in interviews is to see an artist at work — a natural deconstructionist, fashioning a media event to his own intriguing style.

Lynch doesn’t like to talk — and despite all the criticism he’s received, this seems to stem from a genuine reluctance almost bordering on shyness. But he has moved beyond simply not commenting. He now turns the very odd waltz between the reporter and the athlete into something resembling a parody of itself. Lynch was threatened with a half-million-dollar fine if he didn’t show up to take questions from people dressed like carrots at media day. (This, it must be said, is from a league that originally gave Ray Rice a two-game suspension.) So Lynch showed up, and he answered every question with the phrase, “I’m here so I won’t get fined.” To me, this seems a perfectly reasonable answer, and it clearly is the unvarnished truth. However, it was not received that way. All the people who had ginned themselves up beyond all recall to defend Western values against deflated footballs now rose up against Lynch for disrespecting … well … something anyway.

He had somehow disrespected the fans for not answering questions that I never have heard any fan ask in my life. He disrespected the league by cleverly dodging a comically draconian fine. He disrespected “the brand,” which is just about the worst thing you can do as a highly paid commodity in one of our highly commercialized sports entertainment enterprises. (I am never more embarrassed for my profession than when I hear its members criticize someone for not Respecting The Brand, like we all graduated from business school or something.) One superheated colleague of mine even suggested boycotting Skittles, which Lynch endorses, because of Lynch’s profound disregard for the protocols of freaking Super Bowl media day, which annually has all the earmarks of a cattle stampede but none of its delicate charm.

Lynch demonstrated what the banality of the modern sports media has become. It flinches anytime it confronts anything different or out of the ordinary.2 Watching everyone get the jumps because Lynch made an individual mockery of a highly organized mockery has not been an edifying spectacle at all. In my other gig, I have seen what the tyranny of The Brand can do; a candidate can be all kinds of scoundrel, but as long as he stays true to the persona that his consultants craft for him, as long as he stays loyal to The Brand, nobody will notice that he’s filching the good china.

Lynch owes only an honest day’s play for an honest day’s dollar, something he does with fair regularity, by my calculations. He doesn’t owe me or any mook like me any more than that. He does not owe The Brand any more than that, either. And in a way, that’s what the whole mad week was about. The Brand. The Patriots were accused of offending the league’s brand with deflated footballs. Kraft chose to try to protect his own brand instead of the league’s. And Lynch, god bless him, accused of heresy against all the brands, chose to laugh up his sleeve at the whole idea. In his own way, following his own drummer, Lynch is in rebellion against the tyranny of The Brand, and against all the artificial and corporatized encrustation that has covered all of our sports, and especially the NFL, and especially this one event. He may not be doing this consciously; I think he still just doesn’t like talking to strangers. But he’s striking a genuine blow against a genuine empire.

And, I mean, really. Can we play the game now? Please?