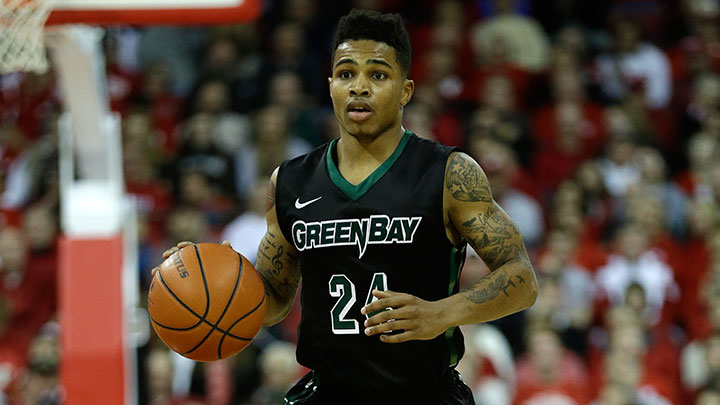 On a blustery November night in Green Bay, about 10 miles east of Wisconsin’s football sanctuary, I watched Keifer Sykes levitate. It happened during a simple drill early in practice, one that University of Wisconsin–Green Bay head coach Brian Wardle runs just to get his guys loosened up. Each player receives a pass at the top of the key and takes a dribble or two toward the lane, muscles past a doughy student manager wielding a foam pad, jump-stops near the rim, and finishes off two feet. Nothing fancy — just a layup line in disguise.

In the school’s media guide, Sykes, the reigning Horizon League Player of the Year, is listed at 6 feet. His 1990s-era fade adds at least an inch. As the P.A. system beams in a staticky audio recording dubiously labeled as “crowd noise,” Sykes corrals his first entry feed. “GET UP, SYKES,” an assistant screams in anticipation. On cue, the point guard bends his knees and launches off the ground. From there, like a stage actor yanked from the catwalk by invisible chords, he just floats. At his peak, Sykes throws down a demonstrative two-handed slam before drifting back to earth. It’s both exhilarating and disorienting; nobody that size should be able to move quite like that. I’m left mainly with the thought that Keifer Sykes’s fast-twitch muscles, wherever they are buried in his slim frame, twitch way faster than yours and mine.

It’s been a noteworthy calendar year for Sykes. As a junior, college basketball’s most explosive lead guard — he of the 45-inch vertical — tallied 20.3 points, 4.9 assists, 4.4 rebounds, and 1.2 steals per night, leading the Phoenix to their first regular season conference title in nearly two decades. His floor game, which he’s more eager to talk about these days than his vertical, has matured noticeably since he arrived on campus in 2011. (For evidence, one need only consult Sykes’s offensive rating, which shot up 18.7 points from his freshman to junior campaigns, per kenpom.com.) This summer, he turned heads at the CP3 Elite Guard Camp, according to analysts in attendance, overshadowing the likes of VCU’s Treveon Graham and North Carolina’s Marcus Paige in stretches. One self-administered windmill alley-oop during the combine’s informal dunk contest has been viewed more than 100,000 times on YouTube — and once in person by a bewildered Chris Paul.

His teammates rib him about it, but Sykes has become a bona fide celebrity in their lakeside town of 100,000, no easy feat for someone who doesn’t wear a yellow helmet to work. Green Bay’s mayor awarded him a key to the city in June, but his newfound popularity didn’t really sink in until a Packers training-camp session at Lambeau Field a month or two later. “I was on the sideline watching them practice,” he says. “The whole team was there, one of the greatest football programs ever, and people were coming up to me. And I’m like, ‘Hold on, all these Packer players are right here!’”

Sykes’s modest fame had to be earned. For starters, native Chicagoans aren’t received warmly in these parts. (When he’s asked about the NFL’s oldest rivalry, which is often, the South Sider claims to be a “confused” football fan.) Coming out of high school, he wasn’t a hotshot recruit that the community could embrace unequivocally. At Marshall on Chicago’s West Side, the onetime home of Patrick Beverley and Hoop Dreams protagonist Arthur Agee, Sykes played one division below the city’s elite schools, and he couldn’t crack the rotation on the summer circuit with Mac Irvin Fire, stuck behind bigger peers — Jabari Parker, Louisville’s Wayne Blackshear, Ohio State’s Sam Thompson — with established national profiles. The work ethic and IQ were always there, according to Henry Cotton, Sykes’s high school coach. “Keifer didn’t go to games, like most kids do at that age, just to go hang out,” he says. “He didn’t watch for the oohs and aahs.” All his little man needed was some tick.

Wisconsin–Green Bay coach Wardle — who overlapped with Dwyane Wade at Marquette — liked the bits and chunks of Sykes’s game he’d gotten to see. On the first day the NCAA cleared coaches to make recruiting visits, four years ago this fall, the Chicago-area native parked himself in the bleachers at Marshall High. “I was really impressed with his work habits, his competitiveness, his leadership, and the way he ran a team,” Wardle remembers. It helped that other Division I coaches weren’t necessarily banging down the gym door; Sykes signed with Green Bay that September.

It’s proven to be a fabulous fit. Sykes played right from the first whistle, and he’s spent considerable time in the practice gym and the film room with Wardle, plotting ways to harness and exploit his natural speed and aggression. “With my athleticism, sometimes I found myself going too fast, running into turnovers, running into the defense, not giving myself a chance to maneuver once I get inside the 3-point line,” Sykes says. “I’ve focused on finding the gap, going slow, then bursting.” 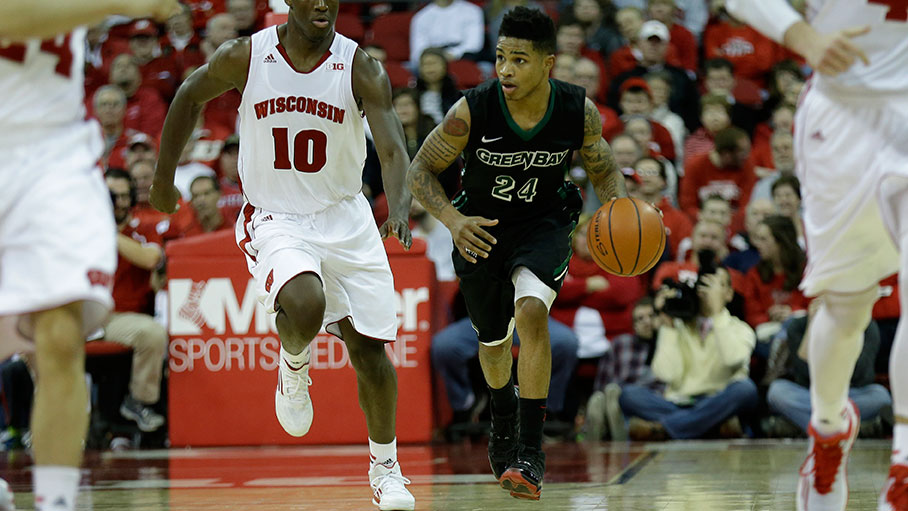 The program that Sykes joined occupies a unique position among midmajors in that they compete in a fanatical sports town whose residents don’t actually have many teams to support. Green Bay is an anomalous media market, with a slew of sports reporters hanging around but, outside of Aaron Rodgers’s comings and goings, without much to cover. The Phoenix play their home games directly across the street from Lambeau at the Resch Center, a gleaming 10,000-seat arena that houses minor league hockey and the occasional Cher concert. Locals have embraced Green Bay’s women’s squad, as the team, winners of a shocking 16 consecutive conference titles, regularly draws thousands. (Their championship banners line the ceiling at the Kress Center, where the men practice, serving as a constant reminder of what they haven’t achieved.) The opportunity is there, in other words, for Wardle’s crew to grow into what Green Bay Press Gazette beat reporter Scott Venci calls the “second-best show in town.”

In his rich baritone voice, Wardle likes to tell a story about his third game as a head coach, back in 2011. The Phoenix were matched up in a holiday tournament against San Diego State, then led by a rangy forward named Kawhi Leonard. Green Bay put up a spirited fight but couldn’t close a four-point deficit coming out of the last media timeout. In the handshake line afterward, Aztecs head coach Steve Fisher complimented Wardle on his team’s energy and execution before handing out a parting piece of advice: “You just have to get better players.” Of course, sunny San Diego is an easier sell than a small public school (enrollment of 6,900) in the frigid north that hasn’t beaten a ranked opponent since 2009. “We have to take kids with intangibles and we have to make them better,” Wardle says. “We don’t get transfers, we don’t get top-100 kids, we don’t get All-Americans. We have to build kids with a chip on their shoulder who want to compete, who want to get better, and who want to be coached.”

Behind Sykes and second-round NBA draft pick Alec Brown, Green Bay vastly improved its team defense and notched 24 wins last season. If their point guard hadn’t limped into the conference tournament on a gimpy ankle, the Dance was a distinct possibility. Four starters return from that group; most analysts pick the Phoenix to win the league again. To pack the gym and gain the enduring trust of cheeseheads, though, a trip to the NCAA tournament is practically required. Wardle still has to answer questions about the Bennett Years, a spell in the 1990s when Dick Bennett — now Wisconsin basketball royalty — qualified three times in five seasons.

Sykes was in diapers for that run, and he’s aching to end his school’s long drought. If he does, Sykes’s game is almost perfectly suited for bracket destruction. The ball is in his hands constantly; he used 29.2 percent of his team’s possessions in 2014, good for 69th nationally. He draws fouls at will — 6.5 per 40 minutes — and shoots more than 80 percent from the stripe. (In seven games against teams that made the NCAA tournament last year, Sykes averaged 25.6 points and 5.1 assists.) This past Wednesday night in Madison, before the game against the no. 3 Badgers got away from Green Bay in the second half, Sykes abused Wisconsin’s Traevon Jackson, creating separation so easily you’d have thought Jackson was playing with his sneakers tied together. (Sykes didn’t get much help and finished with 20 points.) The guard almost ended Frank Kaminsky’s life 80 seconds into the contest, too, rimming out on an atomic almost-dunk that the All-American later felt compelled to tweet about from the locker room.

NBA personnel are buzzing around him more than ever before, but Sykes is trying not to get ahead of himself. Walking barefoot down to the practice gym, a pair of colorful sneakers in his left hand and a peanut butter sandwich in his right, he seems content. The hard work is paying off. “It’s definitely a gift,” he says, “to have people notice what you’re doing.”

The Phoenix have eight games on the schedule after Super Bowl XLIX, plus postseason play. Four of those are at the Resch Center. Good seats are still available.