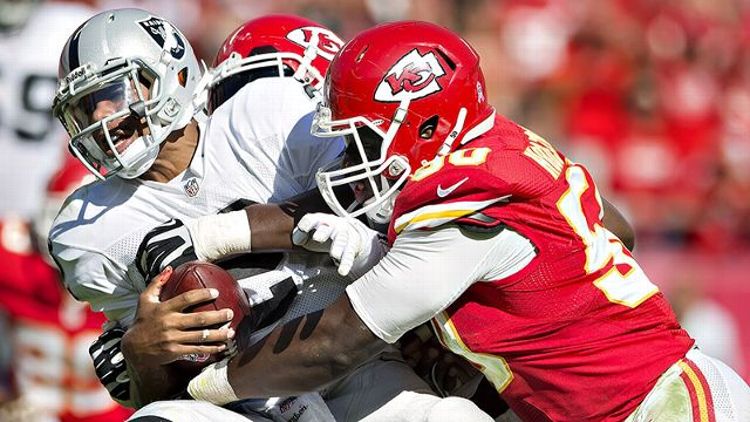 Exactly one year ago, the Kansas City Chiefs were 1-5 just starting a welcome bye week. Three days earlier they’d been embarrassed by a previously 1-3 Buccaneers team, 38-10, with 31 of those points coming in the second half. Kansas City was losing by an average of almost two touchdowns, with a pair of quarterbacks that had thrown 11 combined interceptions and a defense that had allowed 183 points. They looked like the worst team in the league, and after 16 games, they were.

Today, the Chiefs are 6-0, and somehow it isn’t all that surprising. The offseason saw the sort of turnover expected of a two-win team. Replacing general manager Scott Pioli and head coach Romeo Crennel were John Dorsey, card-carrying member of the Ted Thompson School of Team Building, and Andy Reid, who’d won his share of games in Philadelphia. With five returning Pro Bowlers, a trade for Alex Smith, and the introduction of more-than-capable leadership, Kansas City became the preseason sleeper that was actually anything but.

The unexpected part of this Chiefs season isn’t that they’ve beaten Jacksonville, Oakland, Tennessee, Philadelphia, the winless Giants, and the Cowboys (at home). It’s how they’ve done it. Kansas City’s offense is what it was going to be — an exercise in competency with a little Jamaal Charles sprinkled in — but I’m not sure who could have imagined the defense would look like this.

Pick a stat: first in defensive DVOA; on pace for 82 sacks, which would break the single-season record by 10; 65 points allowed, the same total allowed by the 2000 Ravens through six games. At this rate, the Chiefs would give up 173 points — 10 fewer than they allowed in six games a year ago. Four players have scored more fantasy points than the Chiefs’ defense. According to ESPN Stats & Information, the Chiefs’ defense has been good for 14.1 expected points added per game — two touchdowns better than a league-average unit.

How did this happen? How did a team that finished last season with a 2-14 record and 30th in defensive DVOA put together a defense that might be not only good, but historic? The answer is that this is a collection of talent that’s been coming together over the course of eight years and three different general managers. Kansas City was stockpiling talent long before Dorsey or Reid came to town. The blueprint has been there for years. It has just taken time and a few more pieces to truly build something.

The first thing that comes to mind when you think of Carl Peterson’s 20-year run as the Chiefs’ president is probably the 13-win 2003 team, which had one of the greatest offenses of all time. Among the 11 starters were three Hall of Fame–caliber offensive linemen (Willie Roaf, Brian Waters, and Will Shields), the greatest tight end ever (Tony Gonzalez), a Pro Bowl quarterback (Trent Green), and an All Pro running back (Priest Holmes). It’s still ridiculous that that team didn’t win a playoff game.

Peterson’s true gift, however, was building a defense. The first draft for Peterson and his staff was 1989, when the Chiefs took Derrick Thomas fourth overall. That one worked out pretty well. Thomas turned into one of the best defensive players in history, and the Chiefs rode their defense to a string of seven playoff trips in his first 10 seasons.

The end of Peterson’s tenure in KC was ugly, but the truth is, the draft work his people did in those last few seasons was just as notable as anything they’d done before. The stock of defensive players from Peterson’s last five drafts includes:

The last three came into this season not only as starters, but as some of the best players in the league at their positions. Maybe the most impressive part of the Chiefs’ defensive success this year has been that, for the most part, they’ve achieved it without Flowers being 100 percent. Few corners have been more consistent since Flowers was drafted, but this year he’s been dealing with a knee problem that has already cost him two games. Johnson is pretty much the linebacker version of Flowers: consistently very good, criminally overlooked.

Hali’s had his share of productive seasons, but a month shy of his 30th birthday he may be having his best one yet. Hali probably won’t finish with the 20 sacks he’s on pace to get, but a 15-sack season (which would be a career high) is within reason. And sacks don’t even begin to tell the story of what Hali has provided Kansas City with through six games. He’s set up camp in opponent’s backfields, and although teammate Justin Houston has the league lead in sacks, you could argue that Hali has been the better pass rusher.

That brings us to Allen, who hasn’t played a snap for the Chiefs in five years but still might be the best pick of the four. Kansas City’s haul in trading Allen to Minnesota included the 17th pick in the 2008 draft and two extra picks in the third round. The 17th pick (which eventually became the 15th pick via another trade) turned into Branden Albert. One of those third-round picks turned into Jamaal Charles.

Pioli’s time in KC had the same lows as Peterson’s, with none of the highs. The Chiefs made the playoffs in 2010, but otherwise that five-year stretch will be remembered for quarterback futility. Pioli, who came over from New England after working with Bill Belichick for nine seasons, signed former Patriot Matt Cassel to a six-year, $62.7 million deal in his first move as general manager. Pioli’s choices for quarterback — Cassell and Brady Quinn — are what ultimately cost him his job.

But just like Peterson, Pioli made a few moves on his way out the door that positioned the team to succeed. When the Chiefs took nose tackle Dontari Poe 11th overall in 2012, there were plenty of doubts about the talented but unproductive college player. In his second season, Poe is already one of the best nose tackles in football. Safety Eric Berry, taken fifth overall in 2010, has been hit or miss at times during his career, but this year he’s been every bit the player many thought he would be. That same draft also landed the Chiefs Kendrick Lewis, who has been a starter when healthy.

The Chiefs’ defense has been so good that even guys who had previously been written off are playing well. Before the Jonathan Baldwin experience, Tyson Jackson was generally considered the biggest draft bust of the Pioli era. He’ll never live up to his draft status (third overall in 2009), but Jackson is having his best season as a pro right now and seems to be taking to the one-gap, attacking defense installed by new defensive coordinator Bob Sutton (more on that later).

So far, that’s eight starters (Houston, Hali, Berry, Johnson, Flowers, Poe, Jackson, and Lewis), all brought in by regimes that won’t be credited for Kansas City’s turnaround. But when new general manager John Dorsey took over last spring, he still had plenty of work to do. The trade for Alex Smith is obviously the headline-grabber of the offseason, but the way KC populated the rest of its defense with cast-offs and low-price free agents has been just as valuable.

Dorsey brought in the former Dolphins second-round pick Sean Smith to start opposite Flowers at cornerback, and so far, Smith — still just 26 — is having his best season as he thrives in Sutton’s man-heavy defense. Mike DeVito, familiar with Sutton’s scheme from his time with the Jets, was brought in to replace draft bust Glenn Dorsey at defensive end. He’s been exactly what the Chiefs were hoping for — a reliable if unspectacular piece who’s a great run defender among a group of terrifying pass rushers. Rounding out the “starters” is Akeem Jordan, who signed a one-year deal to start alongside Johnson at inside linebacker and has played well.

Those are the 11 players who’d be first on the depth chart in the Chiefs’ base defense, but Kansas City has used a stable of seven defensive backs this year, the other four of whom (Dunta Robinson, Quintin Demps, Husain Abdullah, and Marcus Cooper) were all signed this offseason. Nowhere has Dorsey’s eye for talent and Sutton’s ability to use that talent been more evident than with Cooper. A seventh-round pick this spring who was waived by the 49ers, Cooper started in place of the injured Brandon Flowers Sunday and was excellent. When seventh-round rookie castoffs are stepping in for stars and a team doesn’t lose a step, it’s safe to say the defense is humming along.

At 62, Sutton wasn’t exactly a hot young coordinator when he was hired by Reid in January. Even the most impressive stint on Sutton’s résumé, as defensive coordinator of the Jets from 2006 to 2008, came before the Jets’ defense was anything special. But this season, Sutton has been the key to the Chiefs’ defensive revival. Most of the Chiefs’ talent was here a year ago, but it’s Sutton who has put that talent in the right places for Kansas City to go from one of the league’s worst defenses to its best.

Fundamentally, the Chiefs’ defense is built on attacking. But that doesn’t necessarily mean big blitzes. No team is interrupting a higher percentage of opponent dropbacks, while only bringing four rushers, than the Chiefs, according to ESPN Stats & Information. Twenty-one of the Chiefs’ 31 sacks have come while bringing four or fewer.

The difference from last season isn’t the numbers — it’s the mind-set. Up front, Romeo Crennel’s two-gap defense was based on reading and reacting to an offense’s actions. Sutton’s defense encourages linemen to penetrate and make plays, and it’s been obvious in the pass-rushing improvement from both Poe and Jackson.

That attacking mind-set isn’t limited to the front seven, either. Kansas City’s defensive backs spend most of every game challenging opposing receivers at the line of scrimmage, with Berry often lining up more as a linebacker than a safety as he matches up with tight ends. For players like Sean Smith, a 6-foot-3, physical cornerback, it has been a perfect fit.

There’s still plenty of craziness and creativity within the scheme, but the most significant difference is that Sutton has allowed the talent in place to line up and play. When that talent consists of players like Houston, Hali, and Berry, that strategy tends to win out. Most of the pieces have already been in place, but Sutton was the one to bring them all together.