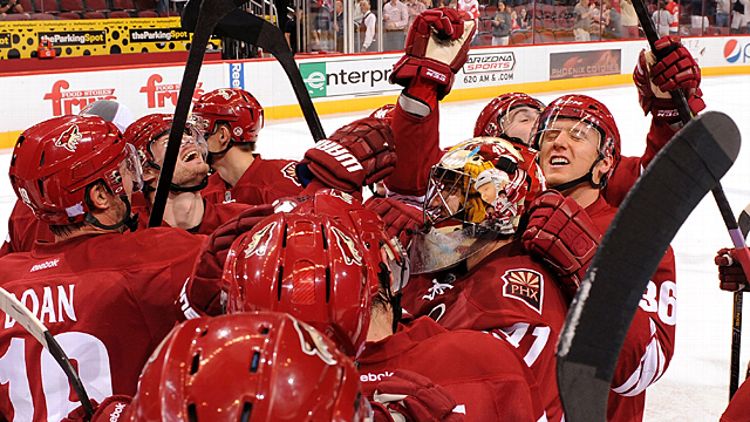 Phoenix Coyotes goalie Mike Smith joined an exclusive club Saturday when he did this against the Detroit Red Wings:

That makes Smith one of just 11 goalies in NHL history to be credited with a goal, and one of just six to do it by actually shooting the puck into the other team’s net. So today, let’s take a look back at those other historic goalie goals, along with a few notable near-misses.

OK, this one isn’t technically an NHL goal since it predates the formation of the league, but CAHL teams were eligible to compete for the Stanley Cup, so I think it deserves a mention. Brophy was in goal for Montreal Westmount in a brawl-filled contest that saw most of the skaters ejected. Frustrated over a lack of support in a game that Montreal would eventually lose 17-5, Brophy decided to take matters into his own hands, skating the puck the length of the ice and beating Quebec Bulldogs counterpart Paddy Moran. This was well before any rule was in place against goalies carrying the puck over the red line, so Brophy’s move, while exceedingly rare, was legal.

Brophy would score again under similar circumstances in 1906, against the Montreal Victorias. For some reason, neither goal is currently available on YouTube.

Smith gets credit for the first goalie goal in NHL history on a technicality, as he’s the last Islander to touch the puck before Colorado puts it into its own net (Rockies goalie Bill McKenzie had gone to the bench on a delayed penalty.)

I’ve always loved the way the Rockies defenseman digs the puck out of the net and looks around as if he’s not sure if the goal actually counts or whether he’s supposed to just keep playing.

This one has kind of been forgotten over the years, but Froese was actually the second goalie in NHL history to be credited with a goal … for about a week.

The Rangers goalie joined Smith in the record book after being given credit for a goal against Smith and the Islanders. But the Islanders complained to the league, and Froese happily acknowledged that he didn’t think he’d touched the puck. The NHL reviewed the play and changed the scorekeeper’s ruling days later, awarding the goal to David Shaw instead.

That decision returned Smith to his status as the only goalie in NHL history to be credited with a goal, an honor that he would hold for roughly one more week.

OK, so this isn’t an NHL goal, either, but I’m including it because of its historical significance and because “Darcy Wakaluk” is such an awesome name. Skip ahead to 1:20 below:

Wakaluk’s AHL goal was the first time a goalie had shot the puck all the way down the ice and into the other team’s net, and it stood as the only one of its kind in the entire history of North American pro hockey … for three whole days.

Hextall had been trying to shoot on empty nets for a while, especially when the Flyers were up two goals (so that he wouldn’t cost them the game if he were caught out of position). Just three days after Wakaluk showed him how it was done, he finally connected against the Boston Bruins. I can distinctly remember thinking this was pretty much the coolest thing I had ever seen.

The play also gave us one of the greatest hockey quotes of all time, as Hextall opened the postgame press conference by telling reporters “Before you guys say anything, I was aiming for that corner.”

Two years later, Hextall was at it again, this time against the Capitals in Game 5 of the Patrick Division semifinals. Note how Mike Emrick recognizes the situation and predicts the goal seconds before the play develops.

This was the first goalie goal to be scored in the playoffs, as well as the first to come on special teams, as the Flyers were short-handed.

After Hextall’s second, it would be seven years before the next goalie goal. This was not it:

Just a few days after Terreri’s near-miss, Osgood becomes the second goalie to shoot and score.

I always enjoyed the way his shot just misses drilling an unsuspecting teammate directly in the face.

Brodeur is the all-time goalie leader with three career goals, but this one, from Game 1 of the 1997 Eastern Conference quarterfinals, is the only time that he actually shot the puck into the net.

Brodeur is arguably the greatest puck-handling goalie who ever played, so it’s almost surprising that he has only managed to pull this off once (despite several other attempts). You can tell he’s pretty pumped but doesn’t want to go overboard and show up the Canadiens, as he eventually settles on a celebration that can best be described as “excited toddler who has to pee.”

After Hextall, Osgood, and Brodeur’s long-distance shots, Rhodes becomes the first goalie since Smith to earn a goal by being the last to touch the puck before the other team scored on itself. Ironically, it comes against the Devils — with Brodeur as the opposing goalie who’d vacated the net on a delayed penalty.

This goal was also a league first in two other ways: It was the first time a goalie goal didn’t come in the third period, and it made Rhodes the first goalie to be credited with a goal and a shutout in the same game.

This is a weird one, and it’s hard to make out on this video clip that was apparently rendered on a Commodore VIC-20, but this is the Flyers managing to score into their own net despite having full control of the puck in their own end. Or, as this year’s Flyers would call it, “our best shift of the season.”

Brodeur gets credit as the last Devil to touch the puck. This goal held up as the winner, making Brodeur the only goalie in history to earn a notch in the GWG column.

Two years to the day after Rhodes’s goal, Jose Theodore joins the club against the Islanders. And he decides to add a degree of difficulty …

Honestly, that’s crazy. I’ve been playing hockey for 30 years and I’m not completely sure I’ve scored on a backhand in my entire life, and Theodore just casually snipes one from 195 feet.

This is the only power-play goalie goal in NHL history. It was also the first time a European goalie had scored, so I’m sure someone called him enigmatic and accused him of disrespecting the game.

Goalie shooting and scoring was starting to feel almost commonplace at this point — Nabokov was the fourth in six years — but this would be the last time it happened until Smith’s goal Saturday, more than a decade later.

And we’re back to the technicalities. This one at least has the advantage of featuring a Rick Jeanneret call:

This was the most successful play of Robert Reichel’s entire Maple Leafs career, by the way.

Mason received credit for a Coyotes own-goal on a play so memorable and exciting that it doesn’t even have its own YouTube clip (though you can find it at the very end of this one).

Mason had also “scored” in the AHL, making him and Rhodes the only goalies to receive credit for goals in both leagues.

Ilya Kovalchuk throws it back to the point, Adam Henrique blows a tire, and we all just apparently agree to pretend we don’t notice that Brandon Sutter clearly tips it and should have received credit for the goal.

Seriously, that shouldn’t count, and every hockey fan should just pretend it never happened. Kind of like we do with the Hurricanes’ Stanley Cup win.

Goal no. 3 for Brodeur is another own-goal on a delayed penalty call. But this one comes with an additional oddity that makes it unique among goalie goals: Take a look at who arrives on the scene just as the puck goes into the Hurricanes net.

That would be Carolina goalie Dan Ellis, who had vacated the net on the penalty call but hadn’t yet arrived at the bench when the bank shot play started to take shape. His valiant attempt to race back to prevent disaster was admirable, but it also makes him the only goalie in NHL history to actually be on the ice for a goalie goal against.

Yes, the NHL’s “goalies who scored a goal” club may have just welcomed its 11th member, but the “goalies who got scored on by the other goalie” club is, mercifully, still stuck at just one.