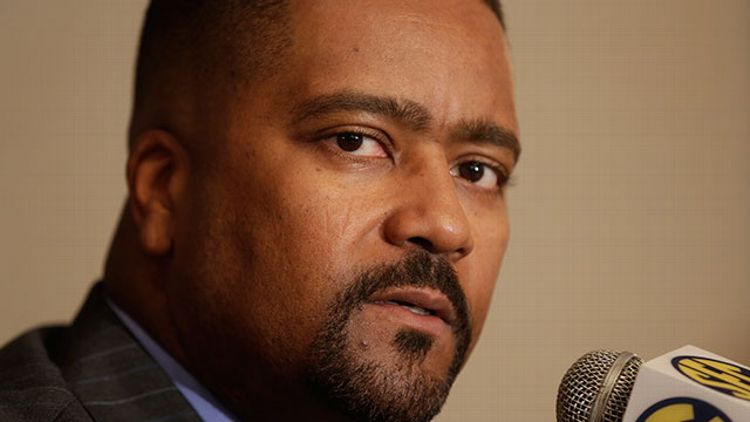 We’re now less than a month from the tipoff of the 2013-14 season, and schools all around the country have held their various Midnight Madness celebrations (though a 2013 rule change meant that teams could begin practicing as early as September 27 this year). It’s almost time for college basketball, but before we ring in the new season, it’s time to wrap up the last bits of business. We’ll start in Missouri, where …

The NCAA Has Lost Its Teeth

This is not necessarily “news” to anybody who had a chuckle at Johnny Manziel’s 30-minute suspension during football season, but it’s still startling to see the extent of the NCAA’s unmanning in the curious case of Frank Haith.

Here’s what the NCAA unearthed in its investigation:

1. While at Miami, Haith had “improper contact” with recruits and “amateur coaches,” which means AAU.

3. He and an assistant also paid off Shapiro’s mother, Mevin. (Just kidding, her name’s not Mevin. But the bribe part is true.)

If you can believe the report, Haith was playing dirty on the AAU circuit and ponied up to keep it quiet. That’s some serious stuff, at least by the NCAA’s bylaws. And it resulted in a five-game suspension? That makes zero sense. It’s a complete non-punishment. It’s the kind of punishment you hand out if you want to ensure that the punished person doesn’t complain. It worked, I guess, in the sense that Haith won’t appeal and the NCAA gets to affirm that it still has the power to levy suspensions on rule-breakers. But really, it’s an impotent demonstration, because what it actually proves is that public opinion is so far against the NCAA that it can’t administer actual justice on its own terms.

Haith will miss games against Southeast Louisiana, Southern Illinois, Hawaii, Gardner-Webb, and IUPUI. That’s the definition of “no big deal,” especially when you consider that he can still lead practices up until November 8. And even during the so-called suspension he can still recruit, which is hilarious when you consider that the suspension stemmed from a recruiting violation.

For a last laugh, let’s revisit Haith’s statement when the verdict was handed down:

While I strongly disagree with today’s report, and the inference on how the program was run at the University of Miami, as head basketball coach during that period, I accept responsibility for all actions in and around that program. This has been an excruciating ordeal for my family. An appeal, which would likely drag further into the season, would only prolong what has already been a lengthy and trying period of time for our student-athletes, the University of Missouri and our fans, and it’s time for closure.

He later went into greater detail about his “struggle,” telling the story of how his daughter has cried multiple times, and how he wants to do what’s best for Missouri by not appealing. And that’s the ultimate joke here; because the penalty is so soft, Haith can accept it with minimal consequence, imply that he’s innocent, and play the martyr for the press.

It’s a win-win! Haith gets off easy for what appears to be blatant cheating, and the NCAA wields a loose kind of power that keeps it vaguely in control. It’s almost like they were working together.

OK, to be fair to Rick Pitino, he only said his team was on the verge of a “potential mini-dynasty.” What does that mean, exactly? To him, three straight years winning the Big East tournament championship and reaching the Final Four qualifies as a dynasty. The Cardinals have a chance to pull off both trifectas in 2013-14, and I think I actually agree with him that, at least in college basketball terms, we could call the team a mini-dynasty.

My reasoning: If we’re going to use the term “dynasty” at all in association with college basketball, we have to qualify it. We’ll never see another run like we saw at UCLA during the Wooden years, simply because the talent is too spread out, leaves too quickly, and is subject to the crap shoot of a six-round elimination tournament at the end of the season anyway. Kentucky is an example of a team that can never be a true dynasty because it’s unlikely to have its best players stay longer than a year. Even if the Cardinals won five straight championships, Pitino would be the only common element.

A mini-dynasty in college basketball requires not only the same coach, but at least some of the same players. In Louisville’s case, assuming it makes a Final Four, it has a star in Russ Smith who would end up playing a huge role all three years. Other players like Wayne Blackshear, Chane Behanan, and Kevin Ware have also been around each season. Sure, they lost Peyton Siva and Gorgui Dieng last year, but the players who remain are enough to preserve a sense of continuity.

Which brings up a more interesting point: To qualify as a dynasty, even of the mini variety, is it enough to win just one title? Would three conference championships and three Final Fours be enough without that second ring? I’m a generous fan, and I say yes for the simple fact that actually winning two straight championships is damn near impossible unless you’re bringing an entire team back for the second run, like Florida in 2007 or Duke in 1992. Even then, as Duke’s famous regional final against Kentucky showed, you need some good luck. Other fans may be less generous with their definitions, but I’m willing to give Pitino his dynastic crown if he makes it to Arlington in April.

Kentucky is shaping up to be a national title contender, and nobody knows that better than John Calipari. Digest this quote from UK’s Big Blue Madness event last Friday:

One of the great things about this baseball season is that St. Louis and Boston have annoyed everyone to the extent that my New York Yankees are a distant third on the hate scale. As a Duke fan, I really think it’s time that started happening in college basketball, too. I get why people hate Duke, but at the very least you’d never catch Coach K giving bombastic speeches like that. And here’s another Calipari gem that might be even worse:

If we become one unit, play with one heartbeat and a love for each another, we will be unbreakable.

Good god, did he hire the writers from Pearl Harbor to write this speech? He sounds like some awful combination of Ivan Drago and Bill Pullman (Independence Day era). Arrogance is one thing, Coach, but cheesy arrogance is unforgivable.

Oh Man, this Marcus Smart–Andrew Wiggins Rivalry Will Be Awesome

The trash-talking has already begun! Marcus Smart was my favorite player last season, and I was one of the few who loved it when he decided to stay at Oklahoma State for another year — not because I think he’s purer of spirit or anything stupid like that, but simply because it was such a unique decision that he made against the condescending advice of almost everyone. Smart strikes me as a rare individual in a sea of drones, and it’s reflected in the way he plays. And he’s none too fond of the hype for Kansas’s stud freshman:

SHOTS FIRED. And then:

There’s something almost Jordanesque in the way Smart is pumping himself up for the showdown with Wiggins. And the funny thing is, I’m not even sure Wiggins is up for it. He seems relatively quiet and humble, while Smart is a far more vocal competitor. If I could watch only two games this season (because I’m on a desert island and my phone is running out of batteries, I guess?), I wouldn’t hesitate to pick both Oklahoma State–Kansas showdowns (January 18 in Lawrence and March 1 in Stillwater).

Tip of the Cap, Chris Collins