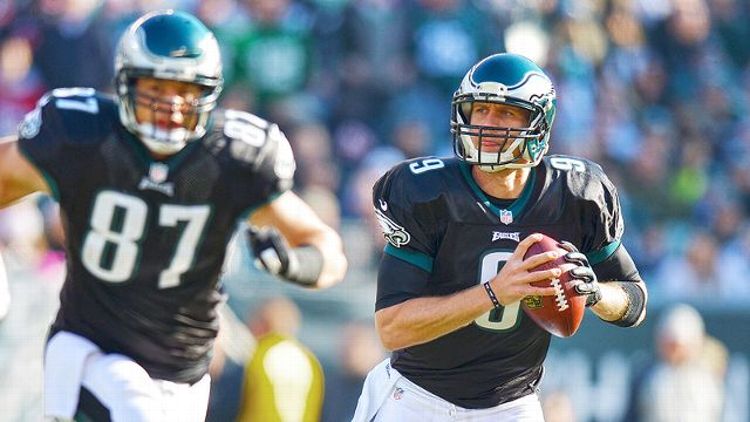 For every football player, the helmet does a little something different. It turns some, like LaDainian Tomlinson, into superheroes. It felt like LT was from the future in part because he looked like he was. For others, it seems almost obligatory. I’m not sure how we’d even notice if Tom Brady played without one.

There’s a select few, though, for whom the helmet seems to make all the difference, and Nick Foles is one of those. Without it, the NaFoleseon Dynamite jokes are inevitable and apt, but with it, Foles looks like a 6-foot-6, strong-armed quarterback who belongs in an NFL huddle. It doesn’t hurt that every time he puts it on, he plays like one, too.

A few days after Foles came on in relief for an injured Michael Vick and threw two fourth-quarter touchdown passes to put away the Giants in Week 5, Chip Kelly did what he could to quell any talk of a quarterback competition. “If he plays well? Yeah,” Kelly said of Foles winning the starting job. “There is always open competition. If Nick goes out there and goes 100-for-100 [passing] and throws 27 touchdown passes. Yeah … If someone comes in and puts in an unbelievable performance, you have to take it all into account.” The 100-for-100 crack was considered by some to be a sign that this was Michael Vick’s job no matter the results, but over the past month, Foles has been about as close to perfect as anyone could reasonably expect.

Foles followed his first start against Tampa Bay (22-of-31 for 296 yards, three touchdowns, and a 133.3 quarterback rating) with a disaster against Dallas, but after missing the next game with a concussion, he’s been nothing short of incredible. Coming into yesterday, Foles was 51-of-72 for 932 yards, 10 touchdowns, and zero interceptions in his past three games. His quarterback rating was 128, and he led the league in quarterback DVOA. It wasn’t 100-for-100, but it was enough. Last week, Kelly said that Foles would remain the starter for the rest of the season.

Anyone skeptical of those numbers pointed to two things. The first was that Foles’s gaudy season-long figures were buoyed by a once-in-a-lifetime, seven-touchdown game against the Raiders. The second was that this streak came against teams ranked 23rd, 25th, and 29th in pass-defense DVOA. Yesterday was a chance to render at least the second point moot, with Foles facing Arizona and its second-ranked defense (third against the pass).

And that’s exactly what he did: 21-of-34, 237 yards, and three more touchdowns against a team on a winning streak of its own. His touchdown throw to Zach Ertz put Philadelphia up 24-7 early in the third — a lead it would never relinquish, despite a few scares late. Overall, it was an afternoon that gave everyone a bit more insight into Foles’s run. His streak of interception-free passes was momentarily broken on an awful throw to Patrick Peterson late, but it was eventually nullified by an unrelated defensive penalty. It’s a common lesson during stretches like this — there’s often a lot of luck involved, and no one is quite as good as Foles looks like right now. The question is just how good Foles will be back on earth, when the impossibly good luck runs out.

Before a mix of inconsistency and injury gave Foles a chance with the Eagles, it gave him a chance back at the University of Arizona. A graduate of Westlake High School in Austin — where he’d broken a few records set by this guy named Drew Brees — Foles was recruited by a handful of good (if not great) programs before landing at Michigan State. He transferred to Arizona after his freshman year, and as a sophomore he was given a chance to start after incumbent Matt Scott stumbled a bit midway through the year. Foles started for the rest of his career at Arizona, and by the time he was a senior, he’d become something of a cult hero in college football circles. His impressive numbers combined with Arizona’s futility led the guys over at the Solid Verbal podcast to change his name to “Nick Foles in a Losing Effort.”

The main knock on Foles entering the draft was that his total lack of mobility might do him in at the NFL level. Plenty of pocket-dwelling quarterbacks lack speed, but the best ones are still able to navigate that space in ways that take pressure off their offensive linemen. He fell to the third round, where Andy Reid scooped him up in hopes of finding his quarterback of the future.

When the Eagles hired Chip Kelly, the thought was that Foles’s chance to start in Philadelphia was probably gone. If he didn’t have the mobility to navigate the pocket, he certainly didn’t have the mobility to navigate a Chip Kelly offense. That theory only gained traction when Kelly named Vick the starter after training camp. There are still scattered instances in which Foles is forced to keep the ball on a zone-read, and although those plays have generally ended positively for Philadelphia, Foles will never be able to fully realize that side of Kelly’s offense. But his success in every other facet of that offense may be enough.

Foles’s lack of overall running ability may shrink some parts of Kelly’s playbook, but yesterday, his ability as a passer showed how other areas can be expanded. Tight end Zach Ertz, the Eagles’ second-round pick this year, had his best game of the season against Arizona, and Foles has turned Riley Cooper into a legitimate receiving threat. His ability to read and manipulate defenses has added a new dimension to the Eagles’ passing game.

This is a play from the first quarter against the Raiders, with LeSean McCoy and wide receiver (and Chip Kelly system veteran) Jeff Maehl running a quick out-dig combination on the left side. As McCoy comes out of his break, Foles gives a quick pump fake with his shoulders. This causes Kevin Burnett (the linebacker just outside the left hashmark) and Charles Woodson (standing at about the 30-yard line) to pause for a split second.

As they do, Maehl settles into a soft spot in the middle of defense, and Foles is able to hit him for a 19-yard gain. With all the zone-read action in the Eagles’ offense, someone might assume that many of Foles’s throws are simple, one-receiver reads made possible by play-action, but watching games from the past month, it’s clear that Foles has a very good understanding of his progressions and of coverages. He isn’t going to go an entire season without throwing an interception (or five), but this also isn’t a fluke. He seems to have a very strong grasp of everything happening around him.

In that same game against the Raiders, there were also several instances in which Foles showed off the ability to extend plays with his feet. On back-to-back throws to DeSean Jackson in the second quarter, Foles was forced out of the pocket, but each time, he kept his eyes downfield and was able to use that big arm to fit throws through tight windows to Jackson along the sideline.

Kelly said earlier today that he hopes Foles “is here for a long time. I’m a big supporter of him, I think he does a fantastic job, but we also know that injuries occur in this game and that’s why I always qualify what I say. I love the kid and I think he’s playing outstanding.” The vote of confidence is significant, because even with all the success Foles has had, and with the Eagles tied atop the NFC East, Kelly had still been mum on his quarterback plans beyond this season. He didn’t pick Foles, and there’s always a chance Kelly will want a quarterback of his choosing that’s a better fit with the coach’s overall scheme.

The other side of that argument is that the defining part of Kelly’s offense is tempo above all else, and having a quarterback who’s able to control the game at that speed is the no. 1 factor in its success. Foles has done that. And if he isn’t the quarterback of the future for Kelly, there will be a quarterback-needy team willing to pay up for him. If this continues, that may never be an issue. Nick Foles is for real, and at least for this year, it might be enough to send the Eagles to the playoffs.