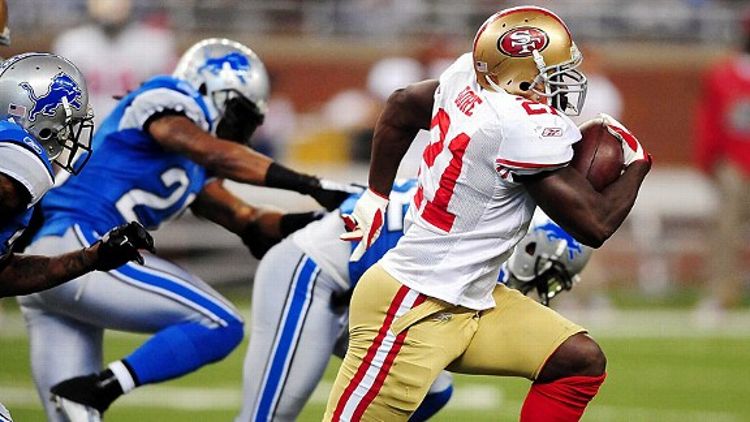 While much of the news out of the San Francisco 49ers 25-19 win over the Detroit Lions centers around the Jim Harbaugh-Jim Schwartz handshake-of-doom, there is another storyline to consider: The 49ers’ close win. The victory was another step in the resuscitation of 49ers quarterback Alex Smith’s career, which is not a complete surprise given that his coach, Harbaugh, was once an NFL quarterback himself. Yet Harbaugh hasn’t brought a quarterback-dependent throw-it-around-the-stadium type of offense to San Francisco. Instead, he’s doing what he did to rejuvenate Stanford, which seems to be to channel his old college coach Bo Schembechler’s tough, physical approach to the game. And against the Lions, Harbaugh’s 49ers didn’t get their yards by running outside or getting the ball in space. Instead, the game plan was simple: run the ball right at Detroit’s vaunted defensive line, led by Ndamukong Suh.

In that effort, Frank Gore paced the 49ers rushing attack with 141 yards, and he earned 102 yards on just two plays — 47- and 55-yard sprints. Indeed, not only were the two plays similar, they were the exact same play. That play is known as a “wham” concept.

Running plays come in different flavors. Some involve straight ahead blocking by the line, while others pull extra linemen to get excessive force at the point of attack. But another tactic is to focus on the leverage offensive players use to make their blocks, which frees up extra blockers to crush extra defenders. In short, while it typically takes two guys to block Suh, with the right tactic, the 49ers were able to use one, thus opening up all sorts of advantages. The most common form of this is known as a “trap,” where a defensive lineman is left initially unblocked but is then blocked by an offensive player from the opposite side. Against Suh, the 49ers used the “wham” play, which is the same concept except the blocker comes from the outside.

On Gore’s first big run, with just a few seconds left in the first quarter, the 49ers lined up in a “trey” set with a wide receiver to each side and a tight end and wing or “H-back,” Delanie Walker, each lined up to the right. The goal of the “wham” blocked run play was to leave Suh unblocked. As shown below, Walker’s job was to perform the “wham” block on Suh as he crashed upfield — a surprisingly simple block because Suh would be so focused on getting in the backfield that he wouldn’t see it coming. This freed up the other linemen to block Detroit’s linebackers, which they did.

The play develops perfectly. Suh, blissfully unaware, flies into the backfield hungry for a tackle for loss. Meanwhile, San Francisco’s interior linemen release for the linebackers, each in good position to make a block.

A moment later, the big play is evident. Walker has completely taken Suh out of the play, while the other players have all made their blocks — ether in excellent fashion or simply by getting in the way as Detroit defenders get out of position. The one defender who could make the tackle — the blur in the photo near Gore — is Detroit safety Amari Spievey. He crashes down too quickly, though (to be fair, he undoubtedly expected better help from the inside), and Gore is off and running.

All that is left is for Gore to put a move on the safety, which he does, and he is off to the races. He would be caught at the one, but would score a touchdown one play later.

Because Harbaugh knows you can’t have too much of a good thing, he called the exact same play in the third quarter, this time for a 55-yard run for Gore. This play seems to exemplify the theme of the week for Harbaugh: tough, physical, and a little bit unexpected.