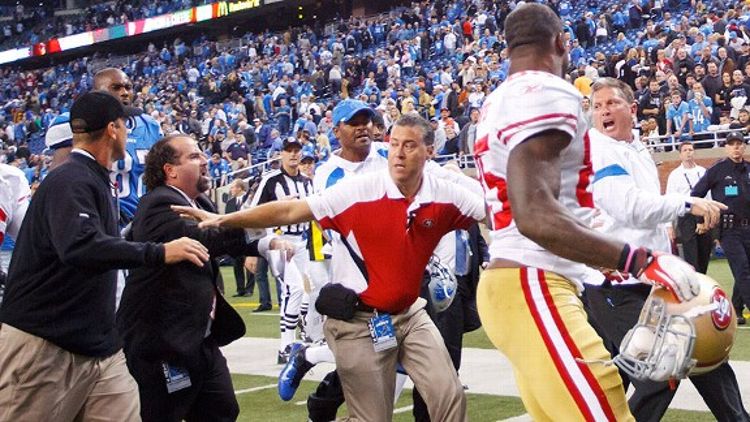 Things not to take lightly about Sunday’s Lions-49ers matchup:

For the purposes of this discussion, the details of this game are not important. Passes were thrown, balls were caught, whistles were blown, and Calvin Johnson was in attendance. Whatever. What transpired after the game ended, however, is another story. In case you haven’t seen this 100 times yet, feast your eyes on this beauty.

For those of us watching this in real time, the scuffle wasn’t televised until a few minutes after it occurred. The camera cut away after 49ers coach Jim Harbaugh did his little jig, ran up to Lions coach Jim Schwartz, and then quickly ran away. Even before we learned of what was to follow, I was displeased with Harbaugh’s postgame performance.

For one thing, it’s the sixth game of the season. Chill out, brah. I understand he’s excited because they beat their rival, in the sense that both franchises once dwelled in the same abyss of suck for a full decade. No excuse. Harbaugh’s getting superexcited after a Game 6 win is like that time LeBron and Wade conducted Mass in the AmericanAirlines Arena after beating the Celtics in the second round of the playoffs. Even if one isn’t used to winning, at least pretend like you’re familiar with the feeling of not being a failure. Jimmy H., this is the NFL, not the Oscars.

The second, and perhaps most inexcusable, thing Harbaugh did was easy to miss if you weren’t paying close attention. Midrun, he untucks his shirt and pulls it out and up, showing a little skin. If you don’t know what that means, you’ve never been a jerk before. As someone who has, trust me when I say that’s blatant, calculated disrespect. Ever see someone dunk and immediately pull their jersey inward, exposing a single nipple? If not, watch Kevin Garnett play for 48 minutes. When he does it, he’s alerting the person he just dunked on:

“Hey, you. Yeah, you on the floor. How’d you get on the floor? Oh yeah, I just tomahawk-dunked on your face, knocking you to the hardwood. My bad. I’d help you up, but I should probably get back on defense. Before I go, this is my nipple. Yeah. That just happened.”

Don’t take Harbaugh’s tummy flash lightly, and don’t let anyone convince you it was “merely an adjustment to make running slightly more comfortable.” False. The young, urban youth would refer to what Harbaugh did as “shots fired.” That’s how I saw it, and it’s pretty obvious that’s how Schwartz saw it.

The final move of blatant disrespect was Harbaugh’s entire interaction with Schwartz. Every aspect of it was grounds for an after-school blacktop brawl. How are you going to beat a man, run at him with your arms up, fist pump, wind-up slap him on the hand, and then guide him out of the way while you continue to run around in celebration? That’s got to be one of rudest postgame coaching displays I’ve ever seen. Completely unacceptable.

My intention in laying all of this out is not to simply bash Jim Harbaugh. My main focus is defending Jim Schwartz’s retaliation, and applauding him for getting angry, while refraining from beating down his coaching counterpart.

I know it’s extremely easy to watch Schwartz chassé-chase the 49ers coach down the field and label him as a crazy. It’s like the person who gets cut off by another driver, then decides to follow them for six miles, just to end up next to them at a stop light so they can flip them off, cut them off once the light turns green, and then speed away. Both seem to warrant a #crazy hashtag, but there are principles behind each action that make them excusable.

While it would be rude even if a legendary coach like Bill Belichick pulled a postgame Harbaugh, one could at least make the argument that he’s earned the right to behave however he pleases (as evident by the emo grunge Sunday wardrobe). Harbaugh seems to think he’s in Belichick territory, since his career winning percentage in the NFL is 83 percent versus Belichick’s 64 percent, but someone should remind him there’s a big difference in their coaching tenures. Schwartz, a third-year coach, was rightfully appalled by the gall of this rookie coach, and was attempting to put him in his place. I see nothing wrong with this.

Additionally, when there is a notable one-sided relationship in any matchup, common sense tells you that the classy thing to do is downplay the polarity of the relationship and refrain from rubbing it in the other side’s face. I’m no coach, but I learned in 10-and-under AAU basketball that, while it is completely appropriate to make fun of the sad, sad opposing team once you get in the locker room, don’t embarrass them in front of their friends and family. Somehow, Harbs has made it this far in life with no idea that this social custom exists. Coming into Sunday’s game, the Lions hadn’t defeated the 49ers since 1995. Over that stretch, Detroit went 0-7 against San Francisco. One would assume extending this record to 8-0 versus the Lions would cause Harbaugh to respectfully congratulate the opposing coach on another close matchup, but lest we forget Jim H. is cut from a different cloth. Instead of modestly taking another win, he settled for the “0-8, Schwartz … how does that taste? We own you, son. And by the way, how’s Detroit’s post-industrial economy doing, my man? Not flourishing? Go figure. CISCO BAY, BABY (followed by a series of DMX growls)” approach.

Is Coach Schwartz just supposed to stand there and take this? Absolutely not.

Finally, let it be known that if Jim Schwartz wanted to get to Jim Harbaugh, he could have. I know there was an NFL player or two keeping them separated, but consider this:

Jim Schwartz is the head coach in Detroit … and is originally from Baltimore: two metropolitan areas that aren’t necessarily known for being cozy and easy-going. Not a huge desire to shoot That’s So Raven in either of these towns, but such classics as The Wire, 8 Mile, Exit Wounds, RoboCop, Gridlock’d, and Homicide: Life on the Street, absolutely. I see Jim Schwartz and immediately think of a hybrid of B Rabbit and Brother Mouzone. Would a hybrid of these two men have the slightest bit of difficulty clocking Jim Harbaugh? Of course not. Thankfully, Schwartz is an experienced coach, understands the repercussions of truly retaliating, and figured a good, public tongue-lashing should do the trick. I’m very proud of him for this.

Jim Schwartz isn’t going to have a ton of people in his corner about this issue, because, as noted earlier, the video without all of the context makes him look like a deranged sore loser. Hopefully, with all the evidence presented, people will begin to understand how appropriate his reaction was and how rude Jim Harbaugh was, is, and will probably continue to be.

Jim Schwartz is an American hero, and don’t you forget it. Jim Harbaugh is the 1 percent.