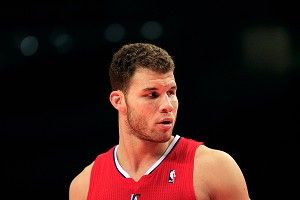 When we talk about Blake Griffin, we often focus on one of two things: His fantastic athletic ability, or how he can build on it. There’s a tendency to point at the block and criticize Griffin’s post game, but in actuality, he does a decent job of scoring efficiently there, posting a PPP of 0.836, which places him in the 62nd percentile among all NBA players.

You can find a few things Griffin does well when you review the numbers and the tape. He’s probably best when he turns off of his right shoulder — on both blocks, turning baseline on the left block (70th percentile in terms of PPP) or turning middle on the right block (76th percentile in terms of PPP). When posting on the left block, Griffin is all about speed, quickly turning his right shoulder and spinning baseline.


A lot of defenders feel the need to “muscle up” against Griffin. Once that happens, though, the defender is off-balance and unable to move quickly, and that opens up Griffin’s spin move. Speaking of that spin move, it’s very good. Griffin uses it to create a sliver of space, which means he can get to the rim and finish strong.

On the right block, Griffin loves to use the same spin move to go baseline. It’s slightly less effective, mostly because defenders are expecting it. (Griffin does it 48.5 percent of the time on his post ups on the right side.) The more effective move for Griffin on the right block is the turn middle for the hook, even though he does this on just 18.1 percent of right block post ups.

When he’s posting up on the right block, defenses are playing that spin and their positioning shows that. They almost always play him on his baseline side, which allows Griffin to get to the middle rather easily. Once he gets there, Griffin can out-jump the defense and score with the hook shot. Late this past season, Griffin started developing an “up and under” fake move in the middle of the paint, faking the hook shot, stepping through, and finishing easily at the rim. This is such a good move, and it’s incredibly effective, but Griffin doesn’t use it nearly enough. The more he mixes this move in, the more effective his baseline spin will continue to be.

I’d also like to see Griffin improve on his face-up game. Griffin’s an athletic guy, so his face-up game should be extremely effective (like Dwight Howard’s, for example). That’s not the case, though. In fact, it’s probably the worst aspect of his post game. On both blocks, Griffin is in the bottom half of the league in terms of PPP (37th percentile on the left block and 49th percentile on the right block), turning the ball over on just about 12 to 13 percent of his face-up possessions.

I notice three things when I watch Griffin’s face-up game. First, he’s not a threat to knock down that face-up quick jumper. This allows defenders to back up off of him. Secondly, he’s not a good ball handler at all. That gets him in a lot of trouble — especially the farther out he starts from the basket — because he has a tendency to lose his dribble on the way to the basket. Griffin also goes baseline a little too much when facing up. He then gets caught under the basket, picking up his dribble in what’s probably the worst possible spot. Griffin’s problem when going baseline is that he puts his head down and drives, only looking up when he gets under the basket. He gets too deep, and that prevents him from reading double teams and passing out of them. (Griffin is usually a fantastic passer out of the post, but when facing up, he doesn’t do well reading double teams.) That leads to a lot of late doubles and steals. If Griffin wants to improve his face-up game, he’s going to have to try to drive middle a little bit more. Additionally, when he does go baseline, he’s got to decide whether he wants to go up at the same side of the rim or continue his dribble and attempt a reverse layup. He just can’t pick up his dribble under the rim.

Griffin does have a post game, and a pretty effective one at that. He has a go-to move, that spin along the baseline, but he needs to start switching things up, especially on the right block. He’s very effective going middle, but doesn’t do it nearly enough. He needs to, to keep the defense guessing. Once he does that, he’ll start commanding double teams a little bit more, and that’s when he can start using his passing ability to hurt the defense. Finally, he really needs to improve his face-up game. If he can do that, his post game will take another step in the right direction.