Deaf Like Me: On Derrick Coleman’s Extraordinary Journey to the NFL 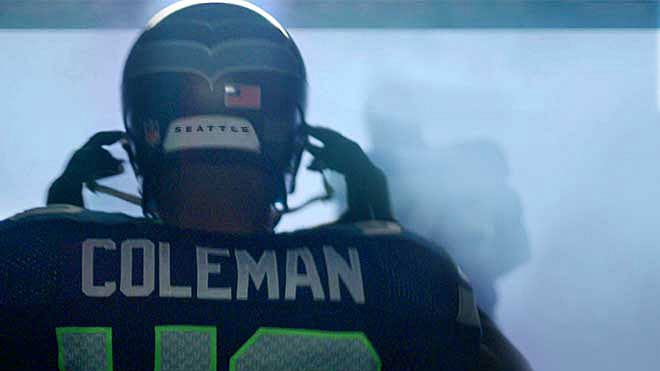 I never thought I’d have much in common with a pro football player, but there I was watching Seahawks player Derrick Coleman’s Duracell commercial and blubbering in public at a Seattle café. Because I’m also hard of hearing, I could relate more than most people to his story.

The ad — with more than 5 million YouTube views since it was posted last weekend — has inspired countless news articles about the first legally deaf NFL player. It’s easy to see why. The clip offers a short trip through Coleman’s life — from when his hearing loss was discovered to the bullying he received throughout his childhood, from the difficulty he had communicating with coaches and teammates to being passed over in the 2012 NFL draft, before the Seahawks picked him up. He never heeded people who told him it couldn’t be done, because, as he says wryly, “I’ve been deaf since I was 3, so I didn’t listen.”

A star high school player who was heavily recruited, Coleman went to UCLA, where he averaged more than five yards per carry, leading the school in touchdowns in 2011-12. If the Seahawks beat the 49ers on Sunday, Coleman will be the first legally deaf man to play in the Super Bowl. He downplays his handicap and attributes his success to hard work, and “doing everything you are supposed to do” as he said during a press conference yesterday in Redmond, but the reality is much different when you are hearing impaired.

Like me, Coleman’s hearing loss was noticed at a young age. He was 3; my loss was discovered when I was 5. Like me, he’s had to wear hearing aids his whole life; like me, he has to read lips to understand people (“When you talk to me you gotta look at me,” he said yesterday). And like me, he was bullied as a kid. Like the ad says, he was told he couldn’t do whatever he wanted with his life. But like me, he ignored everyone and did it anyway. For most of my twenties and thirties, I wrote about nightlife and techno music. People liked to joke that I was a deaf music critic.

In sports, especially team sports, your hearing can be crucial. As a gymnast during my teen years, I had problems with my equilibrium on the balance beam, but I didn’t have to worry about hearing directions from a coach or a quarterback; gymnastic events are mostly quiet, except for the music from the floor exercises. The thought of trying to play in the loudest stadium in the country, having to make out what Russell Wilson is saying, it boggles the mind.

I can’t even imagine the panic of having my hearing aid batteries go dead in the middle of a play — which Coleman says happened during the second quarter of the Saints game last week. I can’t imagine having to worry about the sweat causing them to short-circuit. (As with the Wicked Witch of the West, water is a hearing aid’s worst enemy.)

But he makes it work: To keep his aids from shaking loose, he wears two skullcaps to keep them in place and dry (in his high school days, he’d wear panty hose on his head under his helmet). His hearing aids are waterproof and water resistant. He brings a second pair of hearing aids and has batteries on hand in case they die or malfunction.

And his secret weapon, on and off the field, is lip reading. “All I have to do is look at [Wilson], read his lips, and we’re good to go.”

I wanted to know more about how Coleman was able to overcome his impairment to get to the NFL, so I talked to Kevin Hastin, his coach at Troy High School in Fullerton, California. “The game of football is about overcoming obstacles,” Hastin said. “Every play, you’re gonna face adversity and that’s how kids build character through football. Derrick, he had to face those obstacles and adversity at a very young age. He was just used to it. Any obstacle that came his way, he met it with a great attitude, a great work ethic, and wasn’t gong to be denied. That’s the type of person he is and the type of player he has become. He didn’t get drafted. That didn’t stop him. He got cut by the Vikings, that didn’t hold him down. He’s been able to overcome adversity his whole life.”

And to think, Coleman’s hearing is even worse than mine. He described his deafness thus: “I always use a scale from zero to 10,” he said. Normal people, he guessed, have a hearing of “eight, nine, 10.” “With my hearing aids, I’m seven, eight on a good day. Without my hearing aid, I’m more like a one or two. When I take my hearing aids out, you guys are all talking, I know you are talking but I wouldn’t be able to truly understand it.”

Using Coleman’s scale, I’m probably a six or seven without my hearing aid in my left ear. I am more like him in my right ear — almost completely deaf. But without our hearing aids, the world is a void: Everyone sounds like Charlie Brown’s teacher.

More than anything, being hearing impaired can be incredibly isolating. You miss out on jokes, you miss out on key parts of someone’s sentence, you feel left out of social situations, like, for instance, the locker room. Hearing aids amplify, but they don’t help much in loud environments with background noise, even the ones that cost $2,000 a pop. At parties and bars, I’ve learned to just nod and smile.

Navigating elementary school or junior high wasn’t very much fun, even if you didn’t have a hearing problem. Children are brutal. Before Bluetooth headpieces, which made having something on your ear more socially acceptable, wearing a hearing aid was akin to putting a “kick me” sign on your back. Because a kid wearing a hearing aid is a rarer sight than kids who wear glasses, it immediately singles you out as different. (Coleman’s parents have said that he was called “four ears.”) You were special, and not in a good way.

“I was picked on,” said Coleman. “I was picked last a lot, and it wasn’t because of my athleticism. It was, ‘OK, you got hearing aids, How am I gonna play with him?’ I was always a fast kid, aggressive kid on the playground, but hearing aids always had a factor, especially when you are that little, you don’t really know anything about it,” he said.

While the “Hollywood style” (as Coleman described it) version of his life in the Duracell ad talks about his rough treatment at the hands of his peers and his coaches, by the time he reached high school, said Hastin, those days appeared to be over. “He showed up to Troy confident, assertive. He was easily the best player I’ve seen here at Troy, and in our area for a long time.”

While Hastin said that “in his younger years it may have been accurate” that coaches told Coleman to quit and didn’t know how to coach him, at Troy, “he was the star from the get-go. Our program revolved around him for the four years he was here.” In high school, Coleman was popular. Coleman’s connection with the school was so strong that he served as a volunteer coach the year he didn’t get drafted.

In a way, being deaf has its advantages. When all the other players are frustrated because they can’t hear over the crowd noise, that’s just Coleman’s default mode of operation.

“The advantage Derrick has … they are not used to going to an environment where they can’t hear,” Hastin said. “It doesn’t affect him. He’s used to playing like that. Other teams and other players aren’t.” When you are deaf or hard of hearing, you have to pay closer attention to everything else around you. You see things others don’t.

“He doesn’t go off the quarterback hike,” Hastin said. “Derrick goes off movement; he reacts off the movement. He’s been doing that his whole life. He reacts faster than anybody I’ve seen.”

Added bonus: While other players are actually putting their hearing at risk with CenturyLink Field’s deafening noise, Coleman’s not in pain. “I don’t need ear plugs; my hearing aids are my ear plugs,“ Coleman said.

Hastin said he always knew Coleman, deaf or not, was special. “We knew from the minute we set eyes on him that he was going to be a great player,” Hastin said. “Derrick is a much better person than he is a football player.”