The Clampdown: How the NCAA Accidentally Killed Scoring in Men’s College Basketball 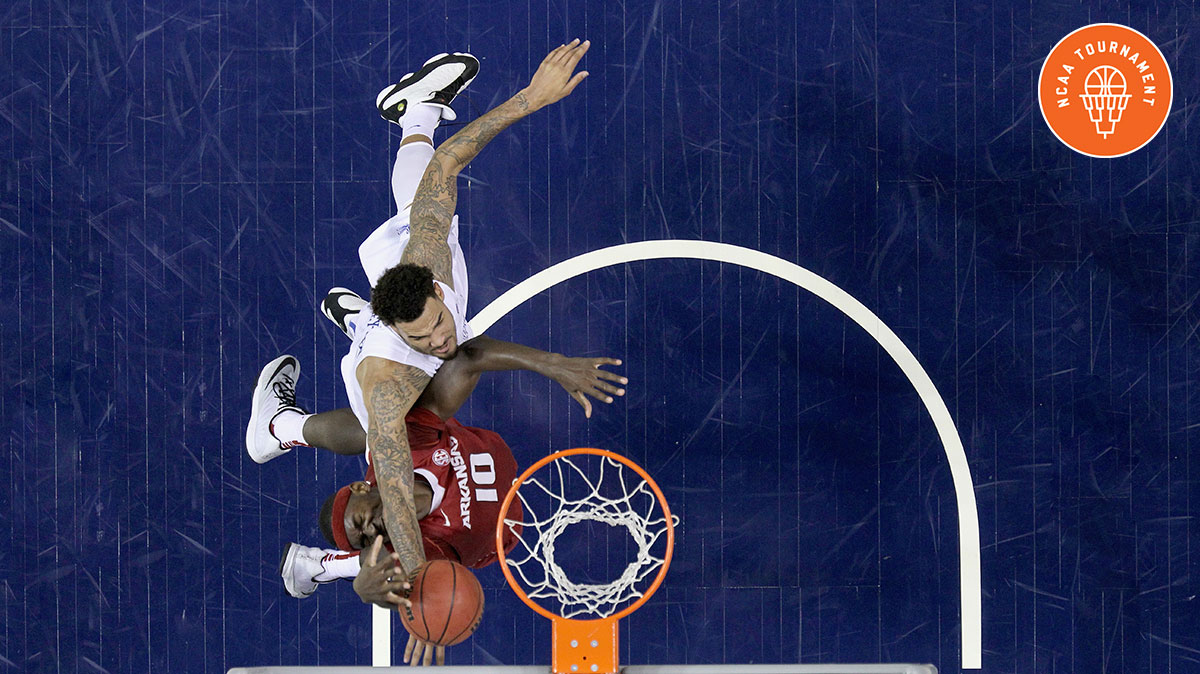 These two claims ought to be mutually exclusive, and yet: Consider the NCAA tournament, whose 2015 edition is now bursting into color in arenas all over America. Seventy-six years after it first tipped off in Philadelphia, the tournament is still the most purely fun sporting event on the calendar — a sensational glut of basketball, too much to take in at once, where anything can happen and every game has the highest stakes. We’ve already seen no. 14 seed Georgia State roar back from 12 down to beat no. 3 Baylor 57-56. We’ve seen six games decided by one point. We’ve seen Harvard nearly beat North Carolina. We’ve seen UAB knock off Iowa State. We’ve seen NC State drop LSU with a buzzer-beater. And it all made perfect sense, because college basketball is the best.

All the Grantland coverage of the 2015 NCAA tournament, right here.
But the tournament is also the showpiece event for a product that has gotten so ragged even its own pundits are talking about it in natural-disaster terms. Seth Davis, in a widely discussed rip-it-up-and-start-again piece in Sports Illustrated this month, called the current state of men’s college basketball a “crisis.” Jay Bilas has described the game as “organized wrestling.” No one ever celebrates after taking a charge in wrestling, so that might actually be a charitable way of putting it. Because college basketball is also the worst.

Field goal percentage is down. Possessions are down. Scoring is down to just over 67 points per game, its lowest level since the early 1950s, after declining in 13 of the last 15 seasons.1 Attendance is down. Turnovers are just about the only thing in college basketball that has recently gone up.

In 2013, the NCAA tweaked the regulations governing fouling to encourage “offensive freedom,” including rewriting the block/charge rule to more closely resemble the NBA’s. Then, after one season during which scoring briefly fluttered back up to early-2000s highs (well, mids), the organization reversed the block/charge decision; referees just kind of stopped enforcing the other changes. The result? A lot of basketball that feels like being slowly dissolved in the stomach of an anaconda. Virginia, probably the second-best team in the country over the course of the season, beat Syracuse earlier this month after scoring two points in the game’s first 13:53. Insert your own boilerplate acknowledgement that defense can be beautiful; does anyone seriously want to watch that?2

The personality of men’s college basketball is currently split in two. It’s half Dick Vitale in full let’s-buy-a-monorail mode, howling at the moment’s happy lunacy; it’s half unsmiling coaches calling 374 timeouts in the course of a 40-minute game to stab a Sharpie into a clipboard and yell about trapping on ball screens. De-stagnating the game’s offensive side probably wouldn’t even be very hard; as Davis pointed out in his SI piece, there’s no reason, even in the one-and-done era, to think college players have gotten less skilled, and the fixes are mostly pretty obvious. (Even President Obama supports shortening the shot clock.) There’s also no reason to think those fixes will be pursued with any urgency, not as long as springtime still greets the NCAA’s administrators with its annual chorus of beeping from the trucks backing up with their TV money.

What’s fascinating to me, though, is not how to fix the problem; it’s how the problem doubles as the perfect expression of the current state of the NCAA and the amateur model itself. Because neither of college basketball’s twin personalities came into being spontaneously. They both exist by design, and whether the outcomes of that design are deliberate or not, the principles underlying it are deeply bound up with the contradiction at the heart of the NCAA’s idea of itself.

Here’s what I mean by that. Men’s college basketball has to be entertaining, because the NCAA, which derives most of its annual revenue from the tournament, wants it to make a lot of money. But men’s college basketball can’t prioritize entertainment too openly, because then the commercial motive would be obvious and would threaten the NCAA’s supposed reason for being.3 “We refuse to admit that we are selling it,” as Bilas recently said. This is how it’s possible to devote a tournament engineered for maximum fun to a style of basketball that elevates pseudo-moral qualities like instruction, teamwork, and sacrifice over carnal indulgences like, I don’t know, jumping, or the ball occasionally going into the basket.

John Wooden, the thin-lipped saint of amateur moralism, famously despised what he called the “dunk shot.” But the NCAA tournament is the dunk shot of sporting events; everything about it is intended to be spectacular. The one-and-done format jacks the stakes into ultrasonic territory for every game. The imperfect seedings and matchups between teams unfamiliar with one another create clear upset chances and instant rooting interests. Throwing emotional 19-year-olds into a nationally televised life-or-death struggle leads to insane drama and wild outbursts of heroism. And staging this in such a way that two, three, four games are happening at once means that fans at home wind up chasing exhilaration all over the dial. March Madness is great every year because — unlike, say, a seven-game playoff series, which lowers the stakes of the games in the interest of more accurately determining the better team — it’s built to be exciting over anything else. It’s built to be amazing, and more than that, it’s built to be amazing on TV.

In the same way, though, the design of college basketball itself makes kludginess a structural inevitability. A team like Virginia, capable of guarding the oxygen out of any building it enters, may be one of a kind. But lesser Virginias flourish everywhere; unless your squad is a Duke- or Kentucky-caliber wrecking crew of offensive talent, the rules give you an incentive to plod, not fly. The length of the shot clock encourages a slow pace. The ease of drawing charges encourages annoying defensive flopping. The use of part-time referees encourages constant fouling — not even hard shots, just a lot of handsy grappling. Coaches get a ton of timeouts, so they stop the clock every 45 seconds to make sure their players don’t try to improvise. They’d be crazy not to! You play the game the rules give you, and under the current rules, if you try to run out a bunch of average college players in a fast, fluid, balletic scheme meant to dazzle fans … well, good luck ever being the highest-paid public employee in the state of Montana, Jack.

If the NCAA were the NBA, it could say, OK, we have a big problem, the game is a drag, we need to do something about this before it becomes a full-blown catastrophe. The NCAA can change the rules to make the game more entertaining4 (although not as easily as you might imagine; more on this in a second), but there’s a certain logical friction that I think works against it doing so. Think about what it would mean for the NCAA to admit that the game needs to be more entertaining. It would mean, first of all, the organization acknowledging that it sees amateur basketball primarily as a spectator sport, rather than as a venue for teaching players life lessons. It would mean the NCAA acknowledging that it sees basketball as a way to make money. And that opens up lines of thinking that the NCAA would rather keep closed. Because after all, if basketball is mostly about entertaining fans and making money, then why on earth is it being administered by an organization devoted to amateurism? And how on earth can that organization justify changing the structure of the game to make it easier to sell while not paying the players whose talents it’s selling?

Now, obviously the NCAA does all sorts of things in the interest of making money that it can’t justify. It sells players’ jerseys without giving them a cut; it pays its top administrators seven-figure salaries while banning athletes for so much as selling their signatures. Changing the game itself, though, would leave the cartel looking a little more exposed. It would mean lowering one of the NCAA’s most reliable shields against criticism — the moral virtue it wants us to read into college basketball’s explicit difference from the shoot-first pros, the civic respectability of zone defense.

Again, I’m not saying this is the result of some conscious diabolical plan that Walter Ncaa wrote down in a secret notebook in 1910. I think the NCAA committed itself to certain reality-obscuring premises a long time ago and that what we’re seeing now is simply the result of the logic of those premises playing out, with no overarching agency behind it. That said, though: If you wanted to devise an approach to basketball that minimized the visible contributions of individual players and maximized the visible contributions of coaches and universities, wouldn’t it look a lot like men’s college basketball today? If you wanted to get away with paying huge sums to coaches, schools, and administrators while telling players to be content with a sandwich and a French seminar, wouldn’t you embrace a moral rhetoric that equated passing with virtue and dunking with selfishness? Wouldn’t you be happy to accept a 35-second shot clock (patience!), a low-scoring game (teamwork!), and a million timeouts (teaching!) — all things that tend to emphasize the importance of systems and diminish the importance of stars?

And that’s the conflict of the NCAA in 2015. It desperately wants you to buy college sports, and college sports are frequently amazing.5 But the NCAA needs you to buy college sports under the pretense that the entertainment you derive from the game is secondary to a larger mission. That larger mission isn’t real, but the NCAA can’t admit that, because then why would the NCAA deserve any of your money? And why wouldn’t Willie Cauley-Stein deserve some of it? And so a fixable problem can’t be easily fixed, because the language by which the NCAA defines itself precludes thinking about the problem as a problem. Take the NCAA Men’s Basketball Rules Committee, for instance, which is made up of 12 coaches and administrators from Divisions I, II, and III. This group, which has the power to influence the basic form of the game, currently includes just one representative from a power conference. Now, the interests of Erskine College, a tiny South Carolina Christian school whose head coach is on the committee, may just slightly diverge from the interests of a fan of high-level college basketball, and the NCAA could probably make things better for both parties by acknowledging this. But to do so would mean admitting the obvious, and if the NCAA wants to survive, it can’t.