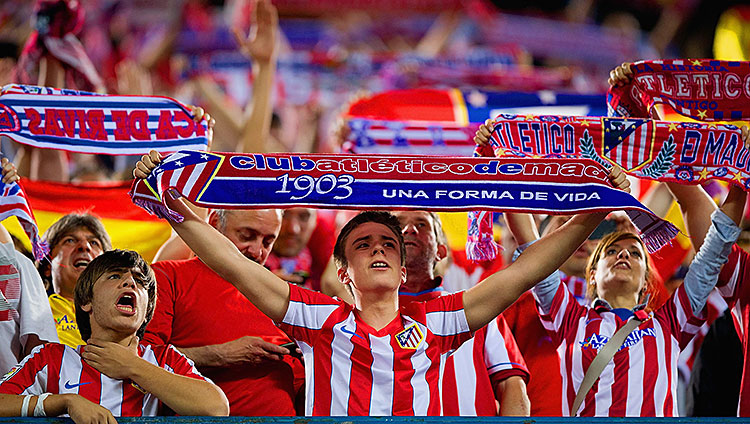 I ambled into a random bar near the center of the Spanish capital on September 18, 2005, looking to catch Atletico Madrid, which was hosting Barcelona at Vicente Calderon Stadium in a Sunday nightcap.

There was a television bolted in the upper-left corner of the room, and rarely did eyes stray from it. It was standing room only in this old man’s bar. There were men who were born during the Spanish Civil War; men who were born to parents who lived through the war; almost everyone inside was alive during Franco’s reign. It was like stumbling into a house of worship on a holy day. Everyone knew why they were there.

Samuel Eto’o put Barcelona up early with a simple finish, but Fernando Torres equalized with a powerful header. Mateja Kezman snuck free at the back post to give Atletico a 2-1 lead, and Ronaldinho commanded the ball like it was his Westminster show dog, putting that result in consistent jeopardy. Down to 10 men for the last third of the match, Atletico defended and survived.

The game was raw, it was rollicking, and it blended the passion and skill exhibited at the highest level of La Liga, the kind that can wrap you in an incomparable soccer hug if you catch it at the right time. At the final whistle, most of the elderly Spaniards seemed to exhale and say “muy bien” at the same time. If I didn’t order a beer during the proceedings, it was because beer wasn’t the point — a remarkable thing to say at any point in time about any cerveceria in Madrid. I left flushed with the excitement of a child departing a roller coaster for the first time.

Two weeks later, I was credentialed for my first match at the Calderon by a soccer magazine on its last legs. Derby night against Real Madrid. The energy outside the stadium was electric, an enormous party replete with cops in riot gear, drunk fans, and vendors selling the dignity in suffering. Inside, the Atletico fans unfurled a banner of a cartoon David Beckham looking back — ostensibly at a camera — in a doggy-style pose. I’m not sure if the banner’s theme had more to do with sodomy or sex as a metaphor for economic inequality, and that’s probably the point. 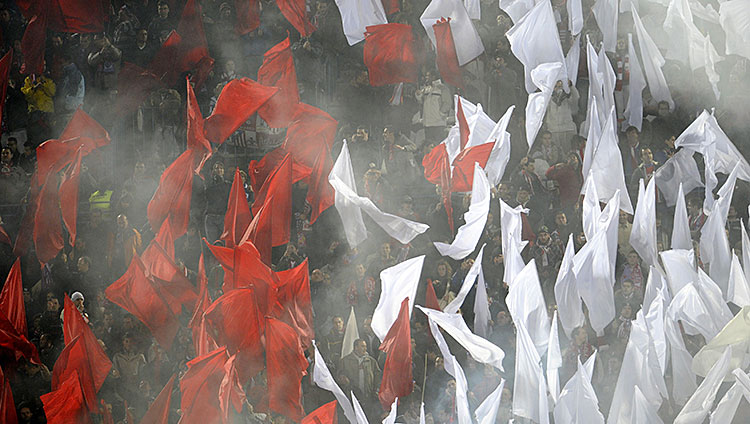 Raul, the iconic Real Madrid striker who started out as a youth player with Atletico, won a penalty a few minutes in. Ronaldo (the Brazilian one) converted. They might as well have just canceled the rest of the match. Real Madrid won 3-0, still relatively early in a string of 25 consecutive undefeated matches against little brother. The narrative continued unabated: El Pupas (the jinxed ones, as Atletico were known) remained jinxed, dominated by their neighbors, Europe’s most successful club. When Ronaldo was injured later in the match, items fans threw on the field included coins, a suckling pig’s head, and an apple, which Beckham took a bite of before spitting it out.

A few weeks later, I was back at the Calderon. Atletico was hosting Villarreal. Atletico went up in the fifth minute and remained in control most of the night. If Atleti wanted to be taken seriously, this was a match they had to win. On the game’s last play, Diego Forlan, who five years later would lead Atletico to second-tier European glory, equalized with a header off a set piece. A fan who sat in front of the media section and smelled of weed went nuts. The scene was perversely endearing, a final primer on everything I needed to know about what I was getting into. This grown man gesticulating wildly, imploring foreign journalists to take note of his tormented story, brought me closer. I stared at the name on the fan’s jersey and remembered John Motson’s voice in the video game for the 1998 World Cup.

I had a frame of reference for my teenage self. I had just witnessed a win dissolve into the night, like a final-page plot twist as surprising as it was expected. Atletico fans were into their team in a special way, literally and commercially dubbed bendita aficion (“blessed fans”). I had already experienced derby defeat live.

If my choice of club to support needed any validation, I found it in my first favorite YouTube video, a short film in Spanish that features a Real Madrid fan and Roberto Carlos look-alike terrorizing a bus full of Atletico fans as the derby plays over the radio.

In the video’s climactic sequence, the look-alike tries to lead the Atleti fans in a resounding chorus of “Ro-ber-to Car-los, la la la la la la,” threatening the bus while conducting with a knife. He even breaks the celebration instructions into sections.

I used to think I became an Atletico fan because of their checkered history, or because their fans could give a sermon on valor at a moment’s notice, or because the team reminded me so much of the Mets. That’s not really the point.

You can take the opportunity to study or live abroad and, without realizing it, treat the experience as a nice time capsule from a fun period: Madrid has amazing nightlife. The Prado is huge. Real Madrid is great; they finished first/second while I was there, winning/losing/drawing against Barcelona. Or, your travels can be part of your road to self-definition. There isn’t a right way, but people generally pick one.

My study-abroad experience wasn’t better or worse than any of my friends. They saw more of Prague, I saw more of Maxi Rodriguez. But the soccer gave me a reason to leave a part of myself there, and to actually go back and live for a while.

Accepting a history of humiliation actually paves an easier path to respect across cultures, whether meeting people outside of other Spanish soccer stadiums or infiltrating groups of expat Spaniards in New York. In a league traditionally dominated by two teams, if I say “Soy del Atleti“ (“I support Atleti”), I’m making it abundantly clear that I chose to follow a team from 10th to seventh to fourth to fourth to ninth to seventh to fifth to third to (currently) first, with two Europa League titles and last year’s streak-busting Copa del Rey triumph over Real Madrid sprinkled in. I have followed along as they sold Torres, Rodriguez, Sergio Aguero, Forlan, David de Gea, and Falcao, with more likely on their way out. Against the backdrop of arguably the richest fat-cat rivalry in sports, investing in Spanish soccer’s historically tortured upper middle class is hard work.

My Atletico fandom endures because when I was presented with the opportunity to take my first paid vacation after college, I used it to go back to Spain. And I made sure to bring a couple of friends to a match, to share with them some of what I’d experienced. I could have saved money. I could have gone to the Caribbean. I went to the Calderon.

I wanted to build on my experiences on a sun-scorched afternoon, watching Atletico take on Levante. The match wasn’t much until early in the second half, when Torres brought about a cathartic release with a beautifully curled strike. And then it happened, from everyone in the crowd.

And it continued, loud and unified.

Torres, an Atleti fan as a kid, raised on homegrown heartbreak, was on his way to Liverpool. His shot against Levante would be his last goal scored at home for Atletico. But the moment is seared into my consciousness because of the serenade, which shifted in my mind from pain-derived satire (a Real Madrid fan on a bus conducting a chorus at knifepoint) to a moment of actual bliss.

Having already once tousled his glorious hair while watching his former team celebrate, Torres returns today with Chelsea to observe a different reality, one characterized by playing the counter, applying just the right amount of ball pressure, combining well in tight spaces, defending narrowly and with depth, seeking the right shape, and capitalizing on opportunities.

Atletico’s strikers are the past (David Villa) and present (Diego Costa) of the Spanish national team. Costa is clinical and terrifying moving forward, ranking second in La Liga in goals scored. Thibaut Courtois, on loan from Chelsea, is an indefatigable Belgian spider monkey in goal, stopping everything in sight, twice if need be. The best reason I’ve heard as to why Courtois is allowed to play against Chelsea is that Atletico, like the fraternity from Old School, is surprisingly good at paperwork.

In front of Courtois is a four-man back line — two Brazilians, a Uruguayan enforcer, and a gallant Spanish right back — that has been together since 2011. Anonymous and impressive, they’ve helped to define Simeone’s tenure as Manager in Black. Watching him forcefully bark out instructions while roaming the sideline with meticulously slicked-back hair is like seeing soccer’s counterpoint to early ’90s Pat Riley. 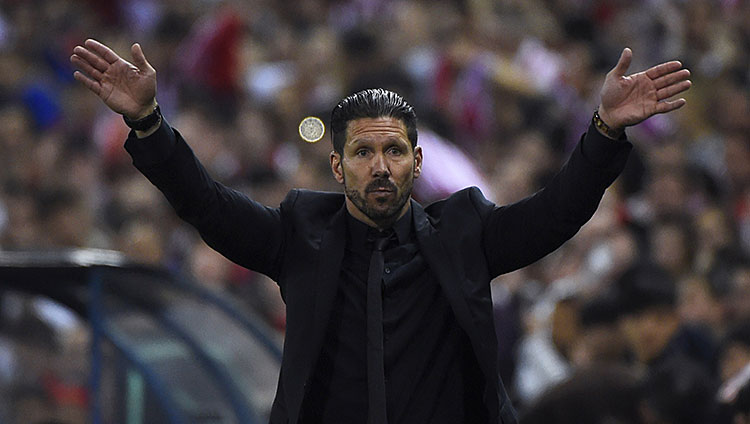 Then there’s the midfield prodigy whose second name translates to “resurrection.” He leads La Liga with 13 assists and his nickname (Koke) rhymes with the Spanish word for “touch” (“toque”), which is perfect, if cheesy. Their other flanker, Arda Turan, is the type of player, relentless in relentlessness, whose play helps others believe. You don’t mess with Turan; he keeps an emotional barometer in his beard. Tiago made waves for comparing Atletico to Robin Hood. And the captain? Gabi? He’s spent most of his youth and pro career in the Atletico system. He was there for “Fernando Torres, la la la la la la” and part of the match that mesmerized me at the cerveceria.

Gabi probably remembers the club that celebrated its centennial by serving loads of paella to fans and playing the Rolling Stones’ “You Can’t Always Get What You Want.” And that’s just it. The club defined by “You Can’t Always Get What You Want,” the club that increased ticket sales after getting relegated, is on the cusp of what feels like everything: first in La Liga with a Champions League semifinal set to kick off, a claim at the title of world’s best club possibly in the offing.

Journeys are the best.

Jake Appleman is the author of Brooklyn Bounce, about the Nets’ first season in the borough, and has written for the New York Times, GQ, NBA.com, and SLAM.