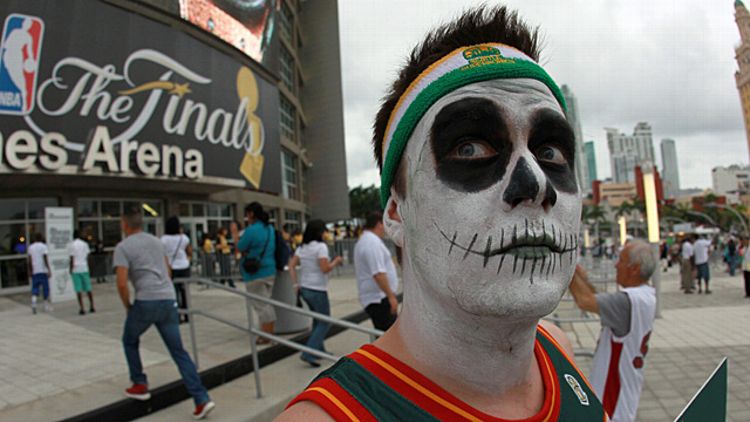 In 2009, five journalists and filmmakers in Seattle got together to make Sonicsgate: Requiem for a Team, a documentary film that told the story of how the SuperSonics left Seattle. The film won a 2010 Webby Award for Best Sports Film.

You probably hate hearing anything about Seattle right now. We know the sick feeling in your gut, the rage in your head, the sadness in your heart. There is nothing anyone could say to you right now that would make things better. We have felt your pain, and we understand the irony of hearing this from the fan base that may now gain from your loss.

We are the producers of the documentary film Sonicsgate: Requiem for a Team. Sonicsgate was a blueprint for other fans of struggling teams to learn from as much as it was our battle cry for the Sonics to return. Over the past four years since the film came out, the Sonicsgate crew has provided advice and support to many Kings fans fighting to save their team, including members of the Here We Stay campaign and the producers of the documentary Small Market, Big Heart, about Sacramento’s fight to keep the Kings.

We know the gamut of emotions losing your hometown team can inspire. To that point, our film ends with this poignant realization by author and Sonics fan Sherman Alexie:

“If we get a team, it’s going to be somebody else’s team … To get a team, I’m going to have to break the hearts of people just like me.”

We’ve never shied away from this unfortunate reality, warning other vulnerable cities that if the Sonics could leave Seattle after 41 years, then truly No Team Is Safe.

The love and dedication of a team’s fan base has almost nothing to do with which cities keep their teams. It depends instead upon competition among municipalities to build bigger and fancier arena facilities, with team owners constantly seeking out new revenue streams and often requiring taxpayer subsidies to stay profitable. The power will always be in the hands of the privileged few, those who guard the purse strings and pluck the puppet strings behind closed doors.

A perfect storm caused Seattle’s rich NBA legacy to fall under the weight of the sports-industrial complex, and Sacramento may be next to succumb to it.

Nothing would make Sonics fans happier than for the NBA to grant Seattle a new expansion team while finding an arena solution that would keep the Kings in Sacramento. Kings fans don’t deserve to lose their team, just as we Sonics fans didn’t deserve to lose ours. Unfortunately, we have absolutely no control over these things as fans. If the Kings leaving Sacramento becomes inevitable, we would rather have it be to Seattle as opposed to Anaheim, San Jose, Kansas City, or one of the many other cities vying for an NBA franchise.

As of this writing, a new local ownership group has emerged to try to keep the Kings in Sacramento. We know how it feels to have last-minute efforts to save your team come up just short at the buzzer. We write this with the hope that Kings fans can learn from what Sonics fans have gone through in our fight for basketball.

When the death knell sounded for the Sonics in Seattle on July 2, 2008, we were as devastated and heartbroken as Sacramento is today. We had been lied to, dragged through the mud, and given false hope — not only by the out-of-town owners who heisted our team, but by the local team ownership and elected officials who professed to have our backs and held the ball in their hands at key points of the game, only to fumble it out of bounds like so many Jerome James post passes.

The loyal Sonics fan base was beaten down, desperate, angry, depressed, and powerless. The national perception was that an indifferent Seattle had simply let the team leave. We knew this wasn’t true.

We needed to put all the facts in one place to show the rest of the country the true reasons why the SuperSonics no longer existed, with the hope that this powerful story would keep our history alive and rally people around the idea of bringing basketball back to the Emerald City.

So we dove head-first into the wretched toilet of the story of how Clayton Bennett and Aubrey McClendon stole our Sonics with an assist from Howard Schultz and local elected officials. Our whole crew worked tirelessly without pay, and the local community stepped up to support the project in countless ways. In that spirit, our executive producer Colin Baxter insisted we post the full movie online for free, removing any barriers so the public could view it at anytime. We wanted people to be able to learn about our plight as fans and understand why the Sonics belong in Seattle.

In the words of Baxter, the film was a digital primal scream. It was our hardheaded refusal to allow those in power who had wronged us to have the final word. No matter what obstacles we faced, we would not be silenced until the SuperSonics returned to Seattle.

We knew the main hurdle to get the Sonics back would be getting a new arena, but we didn’t have a billion dollars to finance a building and buy a team. Instead, we tapped into the power of the Internet, social media, traditional media, and some old-school guerrilla marketing to get our message out and mobilize the people who shared our dream.

We continued releasing new bonus videos while interacting with Sonics fans all over the world through social media. We grabbed our bullhorns and protested outside the NBA offices in New York. We traveled to OKC Thunder games all over the country, representing in Sonics colors behind the Thunder bench on national TV. We had to demonstrate to league officials and any potential team owners that the Seattle market still has a rabid, viable fan base they should want as customers.

In February 2012, a miracle arrived in the form of Chris Hansen, a man with Seattle roots and a desire to solve the region’s notorious arena problem once and for all. He came forward with the most generous financing proposal this state had ever seen, but the fight was not over. Sonics fans had to rally in the political chambers once again to support this arena deal, this time facing unlikely enemies in the Port of Seattle and the Seattle Mariners organization. Despite the opposition’s entrenched power, the will of the people prevailed and the new Seattle arena was approved.

By generously contributing $290 million in private money to the arena, $40 million for public traffic improvements, $7 million to upgrade outdated KeyArena, and repaying every cent of the $200 million public bonding component through user fees, Hansen shattered conceptions of what a public-private partnership can be. So many past arena proposals unfairly burdened taxpayers and acted as pure subsidies to the owners.

Hansen succeeded where so many other powerful people failed because he understands our local community. His ownership group was willing to work hard, stay patient, address any legitimate concerns, and give Seattle an unprecedented fair deal. If previous Sonics ownership had been willing to sacrifice and compromise as Hansen has, Seattle never would have lost the team in the first place.

Regardless of how you spin the situation, the fans are not to blame for this mess.

Sonics fans are not the enemies of Kings fans, just as basketball fanatics who wanted an NBA team in Oklahoma City are not and have never been the enemy of Sonics fans or the Sonicsgate movement. We’ve never blamed the OKC fans or players for anything, and we’ve only criticized the people who had the power to solve the problem. Most Sonics fans will always root against the Thunder and their lying owners, but we also boycott Howard Schultz’s coffee stores, criticize David Stern’s handling of the situation, and pressure the local politicians who let this community asset slip through their fingers.

Our team’s relocation was a perfect storm of ineptitude, corruption, deception, and greed in which virtually anyone in a position of power shared the blame.

In the “Kingsgate” story, however, the only would-be villains are the Maloofs. The Kings owners couldn’t make the NBA work in a rabid basketball market, even pulling out of an agreed-upon arena deal last spring after all sides had celebrated victory. Through their years of incompetent team ownership, it is clear the Maloofs shoulder nearly all of the blame here.

If the fate of sports fans is subject only to a roll of the dice based on which billionaire owns their favorite pro teams, it may seem silly to pour our hearts and dollars into fighting for its survival. But we are basketball fanatics because we love the beauty of the game and the way it has brought our communities together for decades. We all want to share those experiences with future generations. We want Kings fans to have the same privilege.

If the Kings do become the new SuperSonics in Seattle, we will love and support the team as our own while respectfully remembering its Sacramento roots. The new Sonics will be able to retire Gary Payton’s jersey in the rafters as he goes to the Hall of Fame, but we would not forget where this team came from and the pain and discord it must have caused back in Sacramento. We will always support the NBA’s return to Sacramento.

Kings fans, we understand your instincts to be angry with Seattle, but Sonics fans did nothing to cause this situation. We are with you in spirit even as our ultimate fan loyalty resides here in our own city.

If the team does move, our message to you is this: Don’t let the Maloofs have the last word in your legacy. The Sonicsgate model of refusing to be silenced can be a blueprint for your eventual revival, like “The Band That Played On” except with cameras and computers instead of trumpets and trombones. We’ll truly wish our redemption didn’t have to come at your loss, and we won’t fault you for rooting against the Sonics if it happens. We’ll look for you behind the bench at future games, rallying in your purple and black, ringing those cowbells as a reminder to the nation that your great fan base is still here and will always love the Kings.