An Open Letter to Kobe Bryant About His Defense 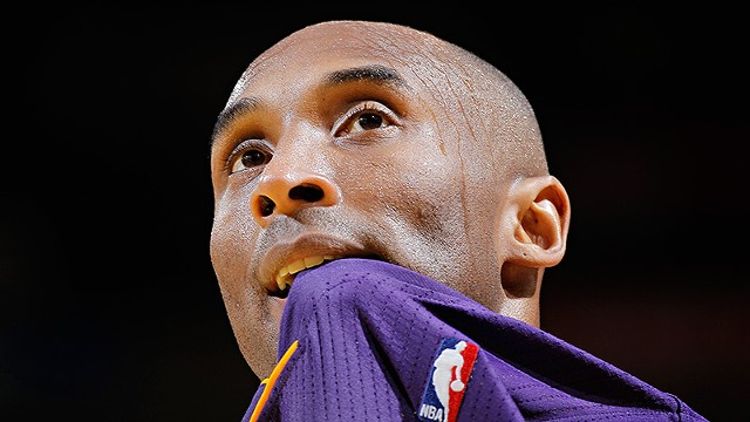 In the middle of a playoff chase that has you clinging tenaciously to the no. 8 seed and yapping about how you have to take more control of the team’s defensive strategy, why are you doing this?

In the 71st game of your 17th season, in the midst of a “heated” playoff “race,” why are you still watching your own errant jump shot while your mark, Klay Thompson, beats you back in transition for an open 3-pointer? Thompson doesn’t exactly take off like Corey Brewer, either, and he still beats you down the floor by several steps.

Why is this still happening? It’s almost April, and Bryant and the Lakers still can’t figure out transition defense, or defense in general.

The Lakers have marginally improved on defense. They’re up to 18th in points allowed per possession and have been a hair better than league average over their last 10 games. But a game-by-game look shows little big-picture progress and a bunch of recent stingy games against the league’s worst offensive teams. The Lakers still don’t get back on defense and there’s still minimal coordination when it comes to weakside help. The Lakers may lead the league in the percentage of defensive possessions that end with teammates shrugging and/or pointing at each other, though the Kings would give them a run.

This isn’t all on Bryant, obviously. Howard is slowly rediscovering his form, but he’s not even close to his disruptive peak. Pau Gasol is recovering from several knee and foot issues that have compromised his already compromised mobility. Steve Nash and Steve Blake simply cannot stay in front of quick point guards:

Antawn Jamison can’t guard anyone, at any position. Mike D’Antoni has concluded that stashing Jamison on small forwards is safer than having him guard power forwards, but when the Lakers went that route last night, the Warriors happily responded by giving the ball to Harrison Barnes and watching him torch Jamison.

Bryant, as the whole Internet (including this corner of it) has noted repeatedly, has been an irresponsible off-ball defender all season. He gambles out of scheme whenever he feels like it, often turning his back completely to his man, and several of Washington’s 11 3s during the Lakers’ home loss to the Wiz on Friday were the direct result of Bryant deciding he didn’t want to play team defense any longer. The Warriors last night exploited the Lakers’ indecisive, nonexistent weakside defense by running pick-and-rolls, including on this smart out-of-timeout pick-and-roll, with Klay Thompson as the lone weakside shooter:

In a typical NBA scheme, the help responsibility probably falls to Bryant here, though that can vary depending on the coach and the situation. Helping off Thompson with no other defender nearby is a risk, and perhaps Jamison, guarding Carl Landry on the block, should have improvised and tried to at least get in Festus Ezeli’s way. Only the Lakers know what the precise right answer here is, but “do nothing and let Ezeli make the only shot he’s capable of making” is the wrong one.

And here’s a killer combination of Blake being overmatched, Howard helping without much urgency, and zero defenders having Howard’s back on the weak side:

The Warriors are a very good offense, but sound NBA defenses just don’t yield this many easy baskets without even a hint of resistance. We can dig deep and pick nits about all the little things going on in Laker Land, but the story of this team today is the same as it has been all season: They have too many bad defensive players, and their good defenders (Howard, Metta World Peace) are not good enough right now to compensate. And though D’Antoni’s alleged inattention to defense has been overblown — the guy can talk defensive X’s and O’s like any other NBA coach — he has never exactly been Tom Thibodeau in terms of establishing a set of rules and getting his team to stick to them. All the mitigating circumstances come into play here — the early-season coaching change, the endless injuries — but the Lakers are still just a bad defensive team.

Which brings me to two thoughts:

1. If Bryant makes first or second-team All-Defense again this season, I’m officially ignoring this honor indefinitely when it comes to assessing a player’s status and career accomplishments. There will be no more “Player X has seven first-team All-Defense appearances” in this space as a way of justifying a man’s place in the NBA hierarchy. Bryant isn’t the first player coasting to undeserved All-Defense appearances based on reputation, but if he makes it again this season, it will be his most egregious appearance ever, and one of the most egregious in league history. It’s probably already time to start ignoring these honors, since Carlos Boozer received what I hope was an accidental vote last season, but Bryant’s selection would make it official.

Again, he’s a good defender when he wants to be, and he can still be a huge pain in the ass on the ball against top scorers. But playing top-notch on-ball defense on a few possessions per game does not qualify someone for an All-Defense honor, when all those other possessions of hideous off-ball defense exist.

Holding Bryant to his peak career standards on defense isn’t even fair. He’s aging, and the Lakers still rely on him to carry an enormous offensive burden — a responsibility Bryant himself chooses to augment by occasionally hogging the ball. And he’s had a fabulous offensive season. Repeat, L.A. fans popping those Kobe jerseys: fabulous. The Lakers need to buy him rest on defense, which is why World Peace has so often over the last three seasons defended the best opposing wing player, even if he’s at a quickness disadvantage in doing so. But there’s a difference between saving energy and behaving recklessly, and Bryant has crossed that line, stopping only to urinate on it this season.

2. Mr. Simmons hasn’t chimed in on this, but the current state of the Western Conference is one of the best-ever arguments in favor of his Entertaining As Hell Tournament for the no. 8 seed. The Lakers can’t get it together. Utah stinks and has zero shot of doing anything in the first round. Dallas has fought admirably to get back into the race, but that team is still scrambling for coherence in just about every sense, and probably isn’t much of a first-round threat, either.

Still, Dallas is outplaying both Utah and Los Angeles right now. Portland has hung around longer than expected, and has put together some solid recent wins in San Antonio, Chicago, and Atlanta. And then there’s the wild card: How would Minnesota and Kevin Love proceed if they knew they could still win their way to the no. 8 seed? Isn’t it feasible that a healthy Love–Nikola Pekovic–Ricky Rubio–Andrei Kirilenko core might make Minnesota the best team in this tournament? That core hasn’t been healthy all season, and it obviously wouldn’t be in peak form by early next month. Pekovic and Kirilenko recently returned from nagging injuries, and Love, who might not play at all for the rest of this season, wasn’t nearly himself during his brief midseason return from his (first) broken hand.

But Rubio has rounded into form. He’s dishing his usual pile of tricky assists, getting to the line at a very encouraging rate, and swiping the ball from unsuspecting guards all over the league. The Wolves could at least make some noise in this imaginary tournament, and it certainly wouldn’t be too hard for them to outplay the crop of teams battling for that magical no. 8 spot.

The Lakers still have the advantage, given their one-game edge in the loss column over both Utah and Dallas. But that advantage is precarious now. The Lakers have already lost the head-to-head tiebreaker with Utah, and though they’re up 2-1 on Dallas, the two teams play in Los Angeles a week from today. A loss there evens the season series and puts the next tiebreaker — conference record — in play. The Lakers hold just a one-game edge on Dallas there.

Regardless: The Lakers aren’t doing anything in the playoffs unless they get their defense in order, and we’ve seen no evidence they can do that against good competition.