Reimagining ‘The Truman Show’ for Our Current-Day Delusions 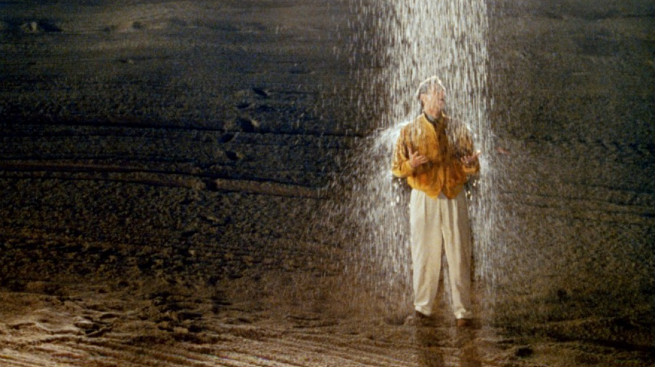 Throughout our lives, we experience moments of isolation, paranoia, and the certainty that some things — our professional abilities, our social interactions and relationships, the content of the news — are fraudulent. The pendulum of solipsism never stops swinging: Though we know (most of the time) this is just a result of normal insecurity, sometimes the thread that attaches that reassuring balloon of truth becomes very thin. Last week, Gawker published a personal essay titled “Mentally Unfit,” one man’s first-person account of his own psychotic break. Convinced he was “being videotaped, Truman Show–style, by hidden cameras,” the author mistook pedestrians for actors and thought he saw Daniel Day-Lewis (his co-star) dressed for Gangs of New York with “a long waxed mustache.” He interrupted a rap battle and followed crowds — which he believed were being used by producers to guide him through various adventures — until he was arrested. In real life he had, a brief time before this break, taken a meeting with producers regarding a reality show based on his stand-up act.

Reality-show culture doesn’t cause bipolar disorder or schizophrenia, and neither can we blame 1998’s The Truman Show for the Truman Show delusion, a non-DSM-verified phenomenon marked by the sufferer’s belief that he or she is being followed by cameras, engaged with by actors, and watched by an unseen audience. The Truman Show delusion was a term coined in 2008 by psychiatrist brothers Joel and Ian Gold, but even in the comparably innocent media landscape of the late ’90s, director Peter Weir compared Truman Burbank’s (Jim Carrey) predicament to early Internet surveillance, recounted by the interviewer specifically as “the Internet site which transmits video images of a young woman taken in her bedroom at two-minute intervals” (help me out, was this JenniCam?).

What The Truman Show had to say about broadcasting your life to a network of viewers was strangely prescient: Six years before Facebook existed, the movie told us we were as drawn to the idea of being the center of attention as we were horrified by the same prospect. In 1998, we may have been more concerned with the film’s commentary on what it meant to be a voyeur looking in on a captive, a person who had been purchased for entertainment purposes before being born and was then held in his meticulously crafted cage for more than 30 years. We used to worry about the Truman Burbanks, but now we worry we are the Truman Burbanks.

That’s why I’m in favor of a scripted Truman Show series, which the newly reinstated Paramount Television announced yesterday. Though it’s apparently in the very early stages of development (no cast or crew are listed; the IMDb page has yet to be created), the announcement is exciting. Deadline described the reboot as “a re-imagination,” which of course means this could also be a dollar-chasing recycling experiment gone awry. We’ve gone so far past the reality-show saturation point, and have grown so tired of criticisms of the way we manipulate our Internet personas for the masses (don’t hate the selfie, hate the game), that this reincarnation of Truman could be redundant, past its prime, whereas the original was well ahead of it. There’s also the obvious question: Why remake something so critically beloved (three Oscar nominations, four Golden Globe wins)? Why mess with something that was so well-executed that it became the easiest way to describe a specific sort of psychosis? Why not let Truman climb the stairs, walk through the door, and finally be free?

’80s babies were adolescents at the time of Truman’s release, and though we couldn’t take selfies, we were just as narcissistic and insecure as the teenagers who preceded and followed us — there just weren’t as many think pieces about our habits, because it was harder to access our disposable camera prints, and concern-trolling clickbait had yet to reach the heights it has today. The biggest threat to an insecure person is the thought that everyone is watching you all the time; the worst blow to narcissism is that nobody is looking at you, and that if they did, they’d flip the channel. Resolving that tension is integral to growing up and realizing that your own personal dramedy is just a public access show with wildly fluctuating viewership over the course of your life; still, the potential — either terrifying or exciting or both — remains: What if you really were the star of it all? It’s smaller-scale geocentrism, but our networks and feeds cater to us just like Truman’s studio-built home of Seahaven. We assemble casts of people to interact with, handpick our virtual experiences, and try to safeguard ourselves against the dangers of overexposure or public mistakes (“It could happen to you!”).

What kept The Truman Show from being a depressing and patronizing movie was Weir’s precision (which included about a dozen drafts of rewrites to Andrew Niccol’s original script) and levity. It also offered Carrey the opportunity to play an actual human being, albeit one who had been raised in a brightly lit box consistently manipulated by Ed Harris, sidelining his acrobatic facial muscles in favor of a more understated and emotional performance (well, by Carrey standards). To be impressive on its own merits, the new series will have to take on a similarly deliberate and delicate approach without relying on a now-proven concept: a modern nightmare we’ve all suffered to varying extents that was given a catchy name less than a decade ago. The questions it raised — who are you? Do you matter? If so, to whom, and to what extent, and most important, is it all real? — are posed to us daily, reflected back in the impressions of ourselves we create and those of others we consume. The Truman Show predicted this anxiety at an early point in its trajectory, and the new Truman Show will have to look beyond the screen behind which we sit and venture a guess about our new dangerous delusions.