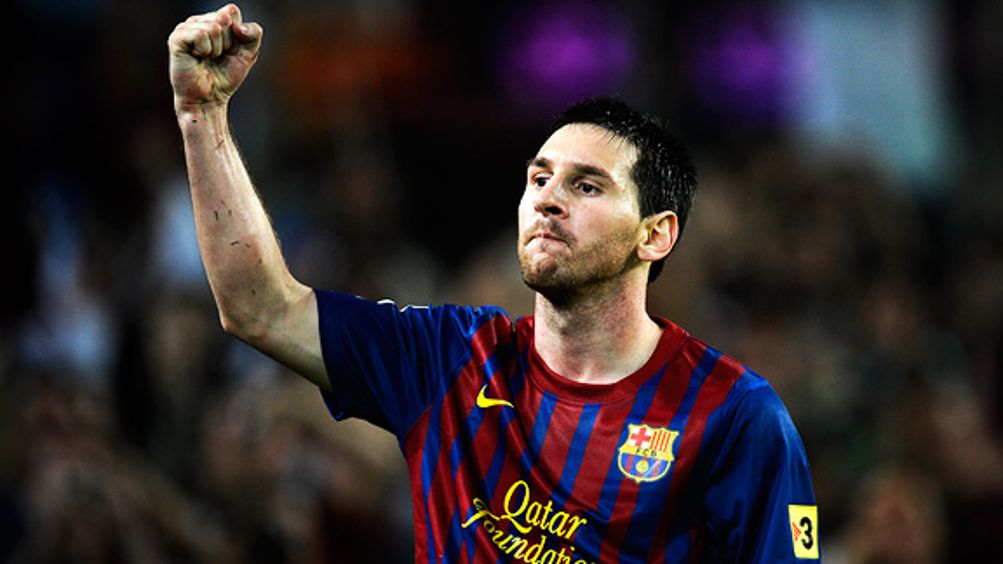 Tall, powerful, sneering Cristiano Ronaldo and short, slippery, cheerful Lionel Messi ought to form one of the great dichotomies in sports — think Magic/Bird, only in Romance languages. They’re the two best soccer players in the world.1 They star on opposite sides of Real Madrid versus Barcelona, currently the game’s most compelling rivalry. And they’re temperamental opposites — Ronaldo a flamboyant, collar-popping he-diva who measures time in lingerie models, Messi a low-key, affable team player who seems to live for the game.

Under normal circumstances, soccer writers would be calling this the Ronaldo/Messi era. Fans would view every development in the sport through the prism of their rivalry. We’d talk about them, rightly and endlessly, as the two divergent possibilities for soccer in the modern age. In many ways, this is a more obvious leap to make with Messi and Ronaldo than with some of the game’s most storied pairs — say, Cruyff and Beckenbauer, who spent their best years playing in different countries,2 or Pele and Maradona, whose careers didn’t overlap at all.

Somehow, though, it hasn’t really happened. Sure, people compare them all the time. And there’s a moment before every Clasico when the commentator says something like, “And Ronaldo will be very eager to get one over on Leo Messi tonight,” generally while Ronaldo trots around during warm-ups looking unaware of Messi’s existence. But they don’t feel like a dichotomy, exactly — more like two planets that occasionally glide into view of each other’s orbits. Attempts to portray their relationship as a real rivalry always feel more hopeful than anything. When Messi says stuff like, “We don’t compete with each other to see who is the better player, we do so for the benefit of our teams,” you get the dispiriting sense that he means it.

It’s hard to put a finger on what’s missing, but here’s one way to think about it. In a classic sports dichotomy, you know that each player needs the other. Their whole careers would be different, and somehow lesser, if they hadn’t been faced with this rival. (Yes, even if the void meant they would have won more games.) Had Roger Federer never taken up tennis, Rafa Nadal’s legacy would be altered beyond recognition. Same goes for Russell-Chamberlain, Brady-Manning, Ali-Frazier, and any number of others. But how would Messi’s legacy change if Ronaldo were a waiter in Lisbon right now? It’s a little easier to say how Ronaldo’s career would be different if Messi had never played — Madrid might never have plonked down $130 million to buy him if they didn’t need a counterweight to the Argentine star. But he’d still be a divisive superstar scoring absurd numbers of goals for one of the world’s biggest teams. It would just be a question of which one.

Actually, that’s only half true. Ronaldo’s game wouldn’t be transformed (nor would the mirrored shades, rhinestone belt buckles, hair-gel doomsdays, et al.), but the way he’s perceived might be. Ronaldo is, at the moment, pretty seriously underappreciated by soccer fans. Everyone agrees that he’s a great player, but he’s a great player whom it’s weirdly cool to disparage. English commentators speculate about whether he’s really better than Nani.3 Aficionados turn up their noses at his high-octane, super-elaborate, step-over-heavy style.4 Fans question whether Jose Mourinho should leave him out of the lineup. Even writers who defend him often take a condescending tone, as Cruyff did in an El Periodico column a few months ago:

Those actions that he wants to do in a matter of two or three minutes can’t be done so quickly and he has to learn to be more patient, so he can distribute his strengths throughout the game. Second, being a great player as he is, he’ll learn how to select the best position to be on the field.

Can you imagine anyone writing this way about Messi? And yet Ronaldo is so bad at selecting the best position on the field that he scored a La Liga-record 40 goals last season — nine more than Messi — and netted 54 in all competitions. At 26, he’s won three league titles, four domestic cups, and a Champions League. Not exactly a loser’s résumé. But people still talk about him as though he’s an embarrassing case of squandered talent.

Why is this? Some of the obvious reasons apply: Ronaldo’s team has beaten Barcelona only once in eight matches since he arrived, Ronaldo didn’t score his first goal against Barca until April 2011, and so on. But it goes deeper than that, and I think that a lot of it has to do with the fact that soccer fans just really, really love Lionel Messi. 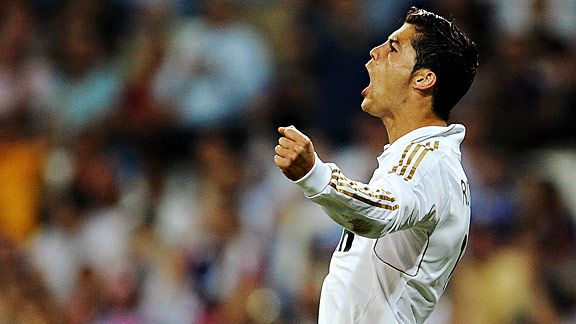 This is where the powerful contrast they present starts to work against Ronaldo. You can divide all soccer players — maybe all athletes — into two groups: the rational and the irrational. Rational players do what they look like they do. They look athletic, and they are athletic. They look balanced, and they are balanced. Ronaldo is a rational player; you could spot him on the beach and think, “Wow, dude looks like he was built to play soccer.” Irrational players come out of nowhere. They don’t instantly look like they’d excel at the sports they excel at, but somehow when they get out on the field/pitch/court, something weird clicks into place and it works.5 There’s nothing about Messi that says “athlete,” but put him on the pitch and magic just breaks out.

For whatever reason, the best soccer dichotomies usually involve a rational player alongside an irrational player. Pele, who was supremely rational, was always contrasted with Garrincha, who was supremely irrational, and then Maradona, who was 5-foot-5 and cobbled together like a bulldog. Cruyff was a skinny ballerina compared to the powerfully built Beckenbauer. Rational players are easy to admire, but irrational players are easy to love.6 They seem to need us more, somehow, and their games bring us closer to the miraculous. Not surprisingly, they tend to strike deeper connections with fans.7 By every measure, Pele was more important to soccer than Maradona, but ask hardcore soccer fans which star they prefer and Maradona wins every time. It’s no coincidence that at the Maracana, Brazil’s national stadium, the away dressing room is named for Pele and the home dressing room for Garrincha.

In that sense, Messi was always likely to be more beloved than Ronaldo. But it goes even further. Irrational players — this is a horrible generalization, but bear with me — tend to have difficult, or at least eccentric, personalities that work to some degree to keep fans away. Maradona’s post-stardom career of narrowly averted cocaine suicide, dramatic obesity, and authoritarian-dictator-befriending is the most obvious example, but Cruyff was an iconoclastic perfectionist prone to unexplained freak-outs,8 and Garrincha was an unstable womanizer who drank himself to death at 49. But Messi is a spectacular exception. He plays for his boyhood club and stays out of the newspapers; by all accounts, he’s a sweetheart, probably the best living athlete whose hair you can plausibly imaging tousling. It’s Ronaldo, who thinks fans boo him “because I’m rich, handsome, and a great player,” who’s the Speedo-sporting asshole of the pair.

In other words, poor Cristiano is on the wrong side of some powerful cultural forces. Given an improbably magical player with an improbably likable personality who, oh, by the way, happens to play for the most beloved and stylish team on the planet, fans are going to resist thinking he could have a rival at all, regardless of what happens on the pitch. You want to feel — I do, anyway — that no one could possibly be in Messi’s league. And so, in the same way that Real Madrid has been transformed over the past few years into a sort of negative index of Barcelona’s greatness, Ronaldo has become the designated hate object whose preordained role is to not be as good as Messi. In some weird way, discounting his talent means taking a stand against arrogance, pointlessly flashy play, and the soullessness of soccer mercenaries.9

And that sucks, both because it’s mildly hypocritical — Barcelona has bought its share of mercenaries — and because Ronaldo himself is both a tremendously fun and a tremendously effective player whom fans ought to be able to enjoy. Even his outsize villainousness, which often makes him seem like a cross between Apollo Creed and mid-’80s Billy Zabka, adds something kind of wonderful. Give him his due. He’s won a pile of trophies, broken some seriously impressive records, and frequently carried a Madrid team that’s been pieced together out of mismatched parts.10 No, he’s not as good as Messi, but he’s closer than most of us let on. Over the long run, having a credible rival at the top of the game would make Messi seem better, not worse. And if they’re ever going to form the dichotomy they seem designed for, it would be nice if the rest of us were prepared to notice.

Previously from Brian Phillips:
Noooo-klahoma!: The misery of rooting for the Oklahoma State Cowboys
The Problem with Novak Djokovic
The Brash Style in American Tennis
Corruption, Murder, and the Beautiful Game: On FIFA’s scandalous history
On the Border: A look at the soccer rivalry between the United States and Mexico
The Long Autumn of Roger Federer