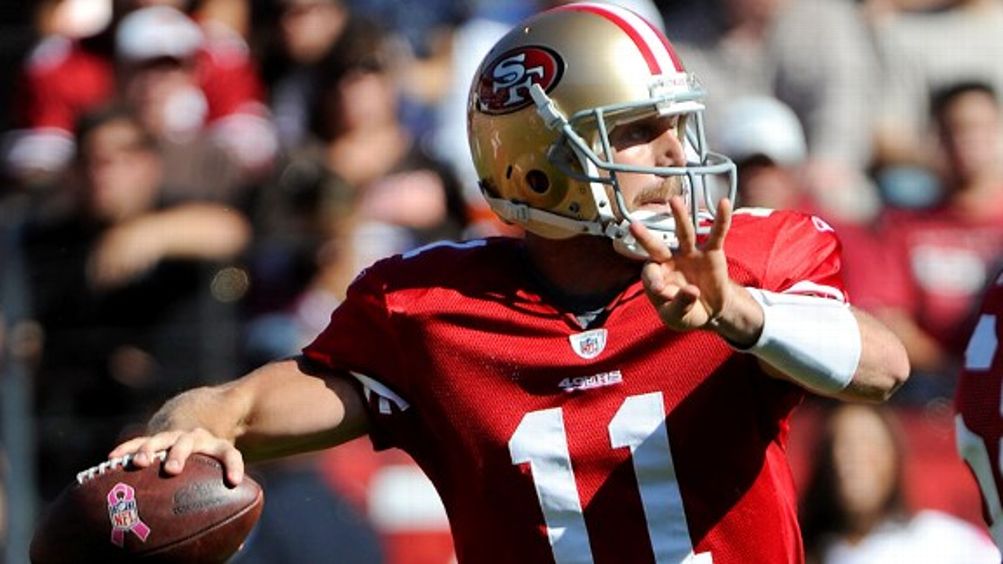 That the San Francisco 49ers — a team that hasn’t had a winning record since 2002 — are 7-1 is one of the most shocking stories of the still-young NFL season. Even more shocking is how they’ve done it. 49ers coach Jim Harbaugh, a former NFL quarterback, hasn’t turned the team around by getting back to Bill Walsh’s West Coast offense, but instead by channeling Bo Schembechler, Harbaugh’s college coach at Michigan, and winning with physical defense and a powerful running game. But the solid, if unspectacular, play of quarterback Alex Smith has been the glue holding San Francisco’s success together. This is not to say that Smith is stepping in to take the injured Peyton Manning’s spot in the elite quarterback conversation, but it’s clear that Smith’s numbers this season are better than at any other time in his career. More important, his team is winning more than at any other point in his career.

Alex Smith may not be an elite quarterback, but he’s doing essential quarterback things like calling the proper audibles in the running game, converting third downs, and avoiding mistakes.

A key reason for this is that Harbaugh has made the passing game easier for Smith, particularly when it comes to beating the blitz. Of course, coaches often say they are “simplifying the playbook,” but Harbaugh has been able to do it coherently and in a way that actually aids his quarterback’s ability to succeed rather than simply removes options.

One reason for this is that many NFL plays simply duplicate each other; you only need so many ways to throw the same pass to the flat or run off tackle. You might as well perfect the plays you have rather than keep adding new ones every week. But Harbaugh has also changed the entire theory behind how Smith and his offense approach the blitz, and this is where Smith’s greatest improvement has come. That’s because Harbaugh eliminated “sight adjustments” from the 49ers playbook. Indeed, this change has been so successful that, according to Pro Football Focus, Smith’s completion percentage, quarterback rating, average yards per attempt, and touchdown-to-interception ratio against blitzes have all been much better than Smith’s historical averages, but also better than his performance on all other downs.

A “sight adjustment” by a receiver refers to the concept that, if a defense blitzes, the quarterback and receiver must both — on the fly and after the snap — recognize it and adjust routes accordingly. For example, if the receiver’s original assignment was to run, say, 12 yards upfield before breaking outside, when he saw a blitz he might instead run five yards upfield and then break inside on a quick slant, presumably away from a man-to-man defender or to a spot left open by the blitzers. The theory behind this is sound: You simply must have answers against the blitz, and you need receivers to break off their routes to give the quarterback someplace to quickly pass the ball. If they don’t blitz, however, you want to throw downfield (or so you think). Again, this is all great in theory.

Here’s the problem: Players have to make sight adjustments after the snap, in the cognitive mist of a few seconds of action. The quarterback is in a decent spot to read the defense’s intentions — to the extent that he can identify the likely blitzers and potential coverage. Receivers, on the other hand, are aligned to the perimeter and can’t see more than a few players in front of them. They also happen to be sprinting once the ball is put in play. This is not to say that sight adjustments can’t work, but they’re certainly difficult to execute, and when they go wrong terrible things happen: Receivers run hot routes they shouldn’t, or don’t run them when they should; passes go sailing to empty patches of green; interceptions are frequent.

It’s my personal view, but I think NFL teams rely too much on sight adjustments. There are two reasons for this: First, these plays were far more straightforward a decade or two ago than they are now, and second, coaches who spend nearly all their waking hours thinking about football tend to forget that it’s not how many X’s and O’s they know but what they can teach their players. To the first point, sight adjustments are old — at least 50 years old, if not more. But they arose before zone blitzes became popular. Against a blitz with man-to-man coverage in the secondary, sight adjustments made perfect sense. They were extensions of backyard football — throw a quick one to the fast guy and let him run with the ball before the blitz overwhelms the offensive line.

Now it’s not so simple. With the rise of the zone blitz, the fact that three defenders might rush from one side tells the offense almost nothing about where the coverage will be. This is why, when zone blitzes first became prominent, you saw quarterbacks throwing awful passes directly to defenders who weren’t even close to receivers. This is not to say that sight adjustments are impossible in today’s environment, but they require an almost telepathic relationship between quarterback, receiver, and even the offensive line.

So the 49ers ditched sight adjustments. But they still need an answer for the blitz, right? Harbaugh has one. If you want your team to throw the ball downfield, you must keep extra players (two running backs, a running back and a tight end, etc.) in pass protection to buy time for your receivers to get open. Coaches resist this because defenses can force unfavorable situations, like when your running back must block a blitzing defender while three linemen block no one on the other side of the field. But these are necessary trade-offs; the advantage to the offense should be that the three or so receivers who do release in the route should have time to beat the coverage. And, if the defense rushes only four, then the running backs or tight ends can leak into passing routes — a technique known as the “check-release”. Remember, this doesn’t mean the defense cannot still blitz more than the offense can block — they always can — but by keeping extra blockers, teams protect their quarterbacks from the inside to the outside. They force the extra rushers to come from the outside and give receivers time to get open.

But what if you aren’t going to block with seven or eight people? The quarterback still needs an anti-blitz option or two, and these are known as “hot” routes. The difference between Harbaugh’s “hot routes” and the sight adjustment is that he builds them into the receivers’ regular routes. In short, every play has at least one hot route — a quick out, shallow cross, or slant — so if Alex Smith sees a blitz, no complex ballet of synchronized adjustments is necessary; he just looks for a different receiver. Instead of reading deep to medium to short on a passing play that was not blitzed, he might look deep to hot, or even hot to hot (as shown in the video above), when facing a blitz. There is a risk that the built-in hot routes won’t necessarily attack the right area for a given blitz and its attendant coverage, but that was an equal risk with sight adjustments. At least with the built-in ones, there is no added risk that someone would simply screw up an adjustment.

This may seem like a small tweak, and maybe even a step backward, but I assure you it is not. As defenses get more complex, the answer isn’t always to get more complex on offense; sometimes, it’s the opposite. By making the game easier, Harbaugh has turned Smith into one of the league leaders in interceptions per pass attempt. Football is a game of intelligent compromises under constraints such as time, ability, and the raw physics of the game. And right now, at 7-1, Harbaugh’s 49ers seem to have found the right mix.