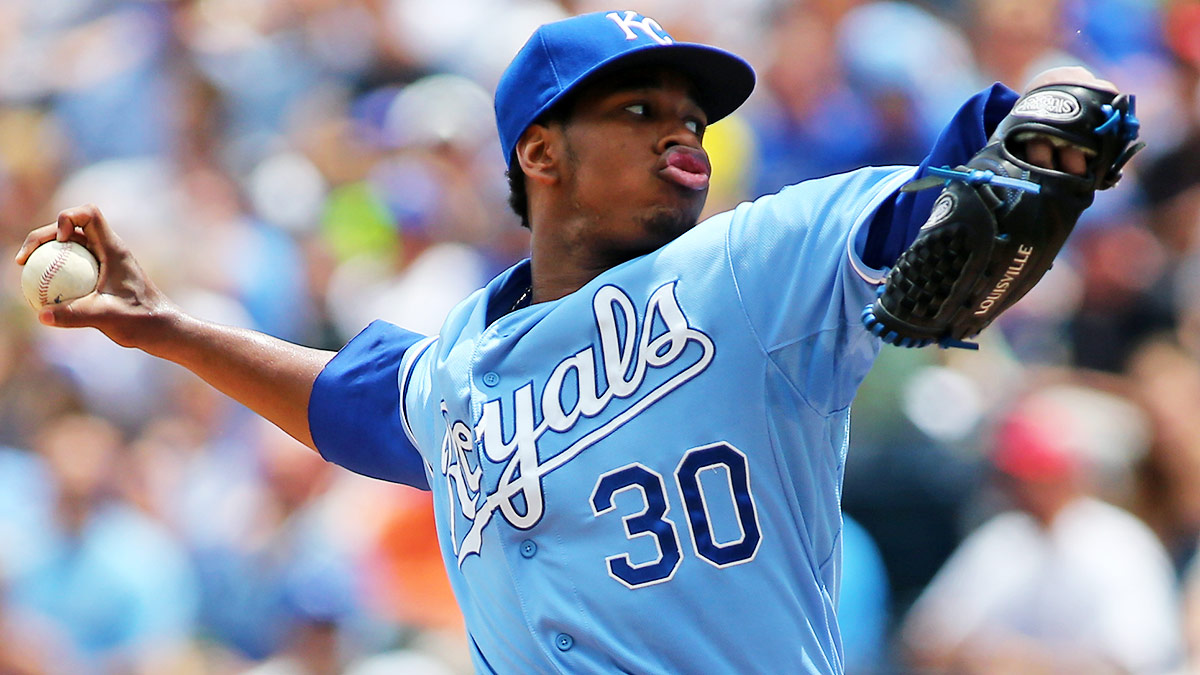 “I consider it a fifth pitch,” Kansas City Royals starter James Shields says of controlling the running game. His old team, the Tampa Bay Rays, considered it “one of the biggest things we did all season long.” When the Royals acquired Shields in December 2012, he found that “they believed the same thing.”

Technically, Shields throws five pitches without any imaginative accounting; he’s conflating his sinkers and four-seam fastballs. Whether his ability to restrict runners counts as a fifth or a sixth offering, though, it’s a valuable one. As a right-handed pitcher, Shields has to turn his back on the runner at first when he delivers the ball, but as Baseball Prospectus author R.J. Anderson noted last season, Shields minimizes the mischief the runner can cause by employing a bend-and-look-back maneuver he learned from Rays coach Dick Bosman, the same instructor who taught Mike Mussina his distinctive dip while with the Orioles.

Thanks in part to that tactic, Shields leads all righties (and trails only Clayton Kershaw among all pitchers1) in pickoffs from 2011 to 2014, with 21. Even when Shields isn’t able to eliminate the runner, the threat works in his favor by keeping runners close. During his two seasons with Kansas City, runners have stolen against him at only a 52 percent success rate (11-for-21), well below the roughly 70 percent breakeven point. When they’ve tried to take an extra bag, they’ve generally been doing him a favor.

Shields’s teammate, rookie starter Yordano Ventura, is almost 10 years younger than Shields, and he’s generously listed as three inches shorter than the 6-foot-3 veteran. However, the two have a few attributes in common. Both have pitched to ERAs in the 3.2 range, with identical 3.69 FIPs. Like Shields, Ventura throws a four-seamer, a sinker, a changeup, a curveball, and a cutter. And like Shields, Ventura has the ability to, as Shields says, “[do himself] justice” by preventing runners on first from reaching scoring position via the steal.

However, while both starters do a good job of controlling the running game, there’s a difference in degree. Ventura hasn’t allowed a stolen-base attempt — not in his 27 games and 26 starts this year, and not in his three starts in 2013. With Ventura on the mound, opposing runners have seen 272 stolen base opportunities — defined by Baseball-Reference as “a plate appearance through which a runner was on first or second with the next base open” — and have let them all pass.

“Really?” Royals catcher Erik Kratz says, when I cite this stat. “No attempts? I didn’t know that. That’s pretty sick.”

That’s essentially the same response I got from the Baseball-Reference Play Index when I queried it for other attempt-less streaks. Ventura’s string of 158 innings without a steal attempt this season is more than twice as long as the second-longest streak (70.1), which belongs to Orioles closer Zach Britton, and Ventura’s streak of 29 starts without a steal attempt is easily the longest to begin a career since World War II. It’s also the longest to begin a career in terms of innings, by a wide margin.

If we remove the “to begin a career” condition, Ventura’s attempt-less streak in starts still looks impressive:

Ventura is seven starts away from breaking Whitey Ford’s post-WWII start-streak record, which would be particularly impressive given that unlike the left-handed Ford, Ventura doesn’t benefit from the fact that runners are significantly less likely to attempt to steal against southpaws. If the Royals remain on a regular rotation, Ventura will make four more starts this season, which means he still has time in 2014 to (a) allow lots of steal attempts and make it look like I jinxed him, or (b) break Roy Oswalt’s expansion-era record. Among active players at either the major or minor league level, only lefty reliever Pedro Feliciano and starters Josh Tomlin and Jason Marquis have enjoyed longer innings streaks without a steal attempt in any combination of consecutive starts or relief appearances. Ventura is 20 innings away from eclipsing Feliciano’s streak of 193 innings in 300 games from 2007 through 2013, though he’d need more time to overtake lefty swingman Hank Aguirre’s 283.1-inning stretch in 140 games and 14 starts from 1958 through 1962.

So why have Ventura’s baserunners remained rooted to the ground? Before we explain how the right-hander shuts down the running game, we should note that he doesn’t deserve sole credit for convincing runners not to try for second. It helps that Ventura pitches to reigning American League Gold Glove catcher Salvador Perez. According to Inside Edge, Perez has the fourth-fastest average “pop time” (the period between when a pitch reaches the catcher’s glove and the catcher’s throw reaches the middle infielder’s) of the 28 major league catchers with at least 35 timed throws to second this season.

Arm strength and release time aren’t the only components of catcher throwing performance — accuracy matters, too — but Perez has proven his prowess, leading the league in caught-stealing percentage in 2012 and recording above-average kill rates in each of the past two seasons. However, research has shown that pitchers play a larger role in determining stolen-base success rates and attempt rates than catchers do, perhaps because catchers are selected and weeded out based on their throwing ability more so than pitchers are for their ability to control the running game. While the Royals allowing the AL’s fewest stolen-base attempts as a staff is partly attributable to Perez, no other Royals pitcher has approached Ventura’s run of attempt-free outings. The rookie must be doing something different.

Ventura isn’t a pickoff adept like Shields; in fact, he hasn’t yet recorded a pickoff in the majors. The secret to Ventura’s success is speed. Ventura is known for his heat — his 98.2 mph average four-seamer velocity leads all starting pitchers in 2014, according to the Baseball Prospectus PITCHf/x leaderboards — but because even slower pitches cover the short distance to the catcher so quickly, velocity is a relatively minor component of a pitcher’s time to the plate. More important is how quickly a pitcher can deliver the ball without sacrificing accuracy. And despite being a power pitcher, Ventura excels in that area, thanks to his compact frame and incredible arm speed.

Not just one of the fastest — the fastest. According to Baseball Info Solutions, Ventura has the fastest average delivery time among qualified pitchers, or among those with at least 200 recorded times. (BIS clocks delivery times when a runner is on first and second base is open.)

Here’s what Ventura looks like in action, frame by frame, compared to slowpoke Tim Lincecum.

“He’s 1.1 to the plate with a Gold Glove catcher behind him,” Royals manager Ned Yost says. “He’s very tough to run on. Very quick, very efficient from his windup. He can command his pitches equally as well from the stretch with a very, very quick slide step.”2

Yost notes that Ventura is also mindful of runners, a point Perez echoes. “He’s got different times he holds the ball, he pitches quick, he goes to the plate quick,” Perez says. “I think it’s hard to steal on a guy like that.”3

All of the traits that make Ventura tough to steal on were evident on Derek Jeter Day, Ventura’s most recent start, when the AL’s second-most-prolific base stealer, Jacoby Ellsbury, singled. Right away, Ventura held the ball, then showed off a lightning-quick pickoff move:

He followed that with a normal delivery:

Before his next pitch, he peered over his shoulder at Ellsbury:

And after a close call on 0-1, he took two more peeks toward first:

Finally, one more pickoff attempt4 glued Ellsbury to the base:

Kratz suggests that seeing how much the running game has helped the Royals on offense — where the team leads the majors with 14.8 Baserunning Runs — has made the team’s pitching staff more diligent about policing runners, but Ventura’s delivery isn’t attainable for most players. “Typically you want everybody 1.3 or better,” Royals pitching coach Dave Eiland says.5 “But not everybody can do that and still execute pitches. So you’ve got to do a variation of the slide step or quicken your delivery up in some way, shape, or form. That’s easier said than done, and not all pitchers can do it, but fortunately with Ventura that’s just his delivery.”

While Ventura has been effective overall, he hasn’t been particularly stingy at allowing baserunners; his 1.304 WHIP (walks plus hits, divided by innings pitched) is the 63rd-highest among 86 pitchers with at least 150 innings pitched this season. Keeping those runners from advancing, however, has helped him limit the damage. If the Royals can win the AL Central (they’re currently tied with the Tigers) or edge out another contender for a wild-card slot, Ventura’s time to the plate and ability to keep runners tied to first will be one of many factors we can credit.

In a 2012 look at why throwing out Billy Hamilton is hard, Baseball America’s J.J. Cooper wrote, “A speedy baserunner can get from his normal lead to second base in roughly 3.25 seconds.” Do the math: Ventura’s 1.1-second time to the plate plus Perez’s 1.9-second pop time add up to three seconds even. “You put those numbers together and not too many guys are that fast who have that quick a reaction,” Royals starter Jason Vargas says. To expect to arrive at second safely, even the fastest runner would have to bank on guessing correctly on a ball in the dirt, or hope that Perez flubs a throw. It’s not surprising, then, that thus far every potential thief has decided it would be better to bide his time until he’s not facing baseball’s swiftest battery.

“I’m sure it’ll happen at some point,” Vargas says. “He’s not going to go his whole career without having a stolen bag.” It might have happened already if Ventura had faced speedy Royals center fielder Jarrod Dyson, who’s stolen 117 bases in the big leagues at an 85 percent success rate.

“I’d be lying to you if I tell you I can’t steal off of him,” jokes Dyson. For all other runners, though, he recommends caution.

Thanks to Sam Miller for inspiring this article on last Wednesday’s episode of Effectively Wild, the daily Baseball Prospectus podcast, and to Nick Wheatley-Schaller for GIF-making assistance.