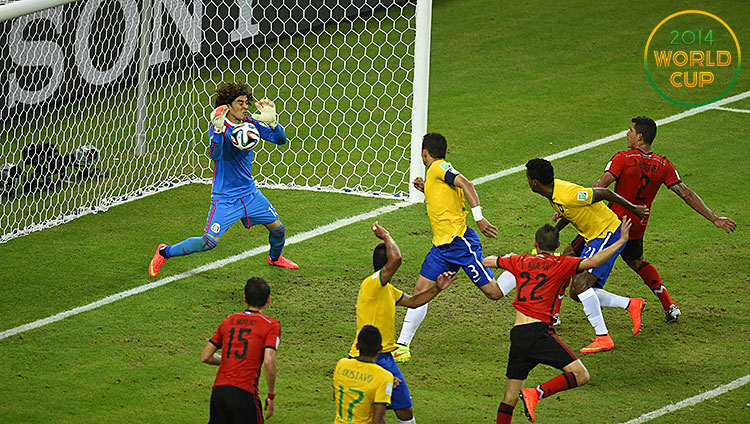 In 2010, Guillermo Ochoa filmed an Allstate commercial. He’s standing in front of a goal, inside a sort of menacing, very poorly lit lair. A generic soccer player takes a penalty kick, and Ochoa dives right, and then up, and then left, and then right again, gradually fissuring into a shot-stopping human multiverse that can save every attempt in every direction, all at once.

Four years later, in Fortaleza, Ochoa finally fulfilled the potential he showed in that commercial.

You’d only be half-joking if you said the weirdest thing about that Allstate spot was Ochoa wearing a Mexico jersey.

The 28-year-old has seemingly been a star in the making for close to a decade. In 2006, he made his first World Cup roster at the age of 20; by then he’d already become the starting keeper at América, one of Mexico’s biggest and most successful clubs. By 2008, he was on the cover of FIFA. And yet, come the 2010 World Cup, Ochoa served as the backup to Óscar Pérez, who, apropos of nothing, is 5-foot-7 and nicknamed El Conejo (The Rabbit). Ochoa was then involved in the infamous tainted meat scandal of 2011, which led to him missing Mexico’s Bob Bradley–ending run to the Gold Cup that year. Then, at the age of 26, he made that dream-fulfilling European move to … Ajaccio, which is the birthplace of Napoleon. (This is its most notable soccer fact.)

Ajaccio were not a good soccer team, which may have weirdly been beneficial to Ochoa; over the last few years, he’s had a chance to make a ton of saves, quickly becoming one of the best keepers in the country. In France, many were confused why the hell this ball-parrying maniac was even playing for Ajaccio in the first place. Especially after he put together this 90-minute Terrence Malick movie against Paris Saint-Germain at the beginning of the 2013-14 season.

And yet, it still wasn’t clear that Ochoa would be the starter in Brazil until lineups for the opening game against Cameroon were revealed. Since then, Ochoa’s played 180 minutes, made seven saves, conceded zero goals, and become a The Fault in Our Stars meme … … all while helping Mexico grab four points that few thought it would take.

Ajaccio were relegated in May, and Ochoa is currently a free agent. That won’t last, but for now? He only plays for Mexico.