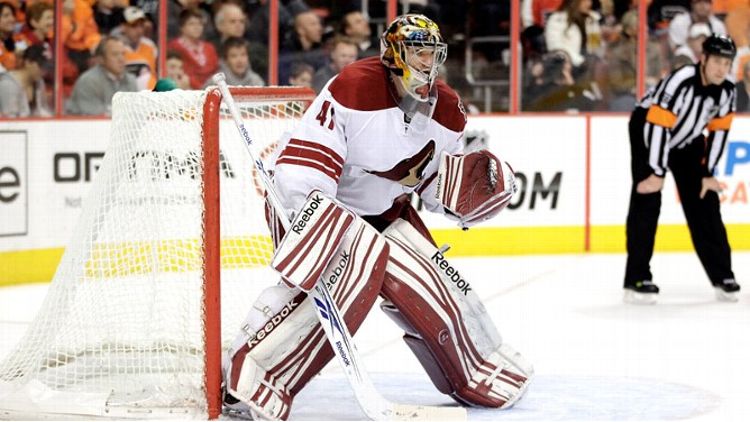 Poor Mike Smith. In two recent games, the Phoenix Coyotes goalie has made saves — one during overtime and one in a shootout — that may well end up on year-end highlight reels. In both cases, though, he didn’t get to go home with the win.

When Marian Gaborik, one of the best goal-scorers in the league this season, earned an overtime penalty shot in the New York Rangers’ contest against Phoenix last week, it seemed like the game might be over. But Smith’s improbable stick save kept hope and the game alive — for a short while, at least. (The Rangers ultimately won in the sixth round of a shootout.)


On Thursday night, Smith again stopped one of the league’s deftest players — this time Pavel Datsyuk — during a shootout between the Coyotes and the Red Wings. I don’t want to spoil the clip (SPOILER ALERT: He makes the save) but it’s worth watching for two reasons, one of which is the broadcaster’s reaction. I didn’t realize it was OK to say that on TV, but now that I know, I want to hear it a lot more over the course of my daily sports viewing.

Awesome! But oh yeah, later Todd Bertuzzi did this to win the game, thus overshadowing another of Smith’s stops. Bummer, dude. One of these days, the Phoenix goalie is going to snap after making a big save and pull himself out of the game, head directly into the dressing room, and vanish forever. NHL.com will put together a video retrospective of this and call it “Droppin’ the Mike.”

In other goalie goodness: His time on the Stanley Cup-winning Chicago Blackhawks proved helpful to San Jose Sharks goaltender Antti Niemi on Sunday night — check out how he anticipates this Jonathan Toews-to-Patrick Kane pass.

Kane later said he didn’t know whether to smile or cry afterward, though he might have made the wrong decision: Does anyone else think that he looks kind of Spencer Pratt-like with that disbelieving smirk?

It’s always enjoyable when a skater successfully tries his hand at protecting the net. Here, the Minnesota Wild’s Nick Schultz bails out his netminder Josh Harding on Tuesday night. You must get extra-special (read: unhinged) goalie karma when you do something like that. Try not to spend it all in one place, OK?

I wish I had more to say about Sergei Bobrovsky’s wicked glove save on the Islanders’ Michael Grabner last week, but I’m too distracted by just how bad those Isles jerseys really are.

Martin Brodeur may be 39 years old, and he may be slowly murdering my fantasy team, but saves like this are why he’s still considering sticking around. He’s like the last guy at a house party who keeps saying, “I’ll leave in a sec, I just want to listen one more time to this song,” and next thing you know, it’s morning and he’s passed out on your couch.

And finally, oh how I longed for this save to wind up as the turning point in Ryan Miller’s career. It would be the stop that helped him regain his old Olympic form! The stickwork that officially brought an end to the beginning of the end for the Sabres!

But then … Miller let in four goals and finished the 4-1 loss with an .879 save percentage. Oh. Still, for a brief time during those few minutes of the first period of Buffalo’s game against Winnipeg, the struggling goalie was back to his usual self. It may not have lasted long, but lo, it was glorious.