Without Rose, the Bulls Play Up the Rip Factor 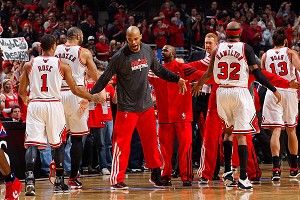 Even before Derrick Rose went down on Saturday, the Chicago Bulls were exploiting the other pieces of their offense. Guard Rip Hamilton is one of the best players at working off of screens, and the Bulls ran a number of sets to take advantage of that. The most effective one we saw was the single/double action at the high post.

Teams run the single/double when they have a strong shooter who can work off of the basketball, like Hamilton. The set begins with one screener at the block or elbow and two screeners on the opposite side of the court. The shooter sets up in the middle of the paint with his choice to go off of either side, and the defender always ends up trailing the shooter around the screen.

On Saturday against the Philadelphia 76ers, the Bulls ran the single/double at the elbows for Hamilton three times in a row in the first quarter, resulting in six points: 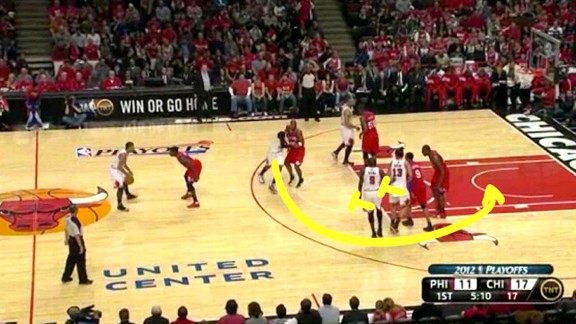 The set starts with Hamilton at the top of the key, Carlos Boozer at one elbow, and Joakim Noah and Luol Deng on the opposite elbow. As Derrick Rose brings up the basketball, Hamilton curls around the double side of the screen toward the lane. 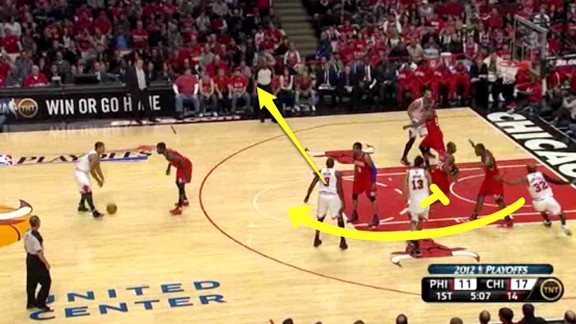 As Hamilton tries to get to the paint, he notices that his man “shot the gap” on the second screen. Usually defenders stay attached to the offensive player’s hip as he goes around screens. But Jodie Meeks went through the screen on the opposite side, thinking he’d meet Hamilton and be in a better position to defend him. Hamilton sees Meeks’s move and doesn’t even bother going to the middle of the paint. He stops and curls around the Noah/Deng side of the screen. Deng clears out, giving Hamilton space to work. 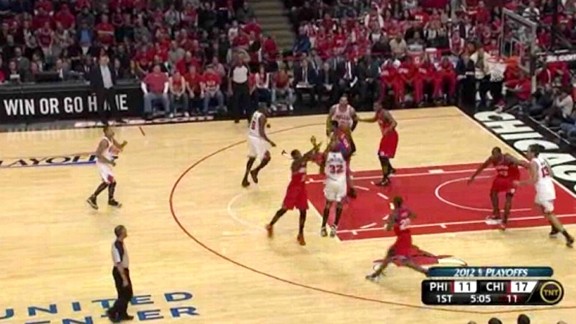 As Hamilton makes the catch, Meeks has no chance to contest the shot, and Hamilton knocks it down easily. Here is the play in real time:

Because the play was so effective, Chicago decided to go right back to it in the next possession:

Again Meeks gambles and meets Hamilton on the opposite side, but this time he is more successful. Hamilton bumps into his chest, wanting to use the Noah screen on the single side, but Meeks cuts him off. Hamilton decides to use the double screen once again, this time leading to a foul on Meeks.

After two successful attempts, the Bulls run the set a third time, and this time they run it all the way through:

Lou Williams is defending Hamilton now, and he trails him from the start. When Hamilton starts to move off of the Boozer screen, Williams shoots the gap, taking away the curl and the pass. Chicago — anticipating that the Sixers would finally stop Hamilton in the third go — moves onto the second option: Deng flaring off of a Noah screen. But Deng isn’t open, so Chicago goes to its third option: the two-man game between Rose and Noah. Rose passes the ball to Noah (who is at the elbow) and cuts off of him. Noah fakes a handoff, attacks the rim, and comes away with a dunk.

At the start of the second half, with the Sixers making a run, Chicago went back to the play that worked well in the first half:

When the Sixers see Hamilton curling through, they panic. The defender on Rose leaves him to essentially double-team Hamilton, who quickly finds Rose for a wide-open 3.

After the Bulls had run this play five times for nine points (they ran it once with Boozer missing a jumper on a slip), they began the next possession by running another set off of it. 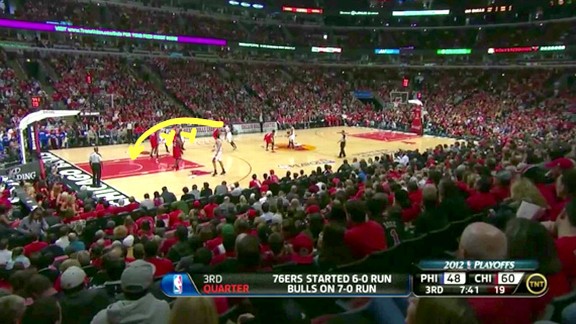 Rose brings the basketball down the court the same way, as if they’re going right back to the same play. 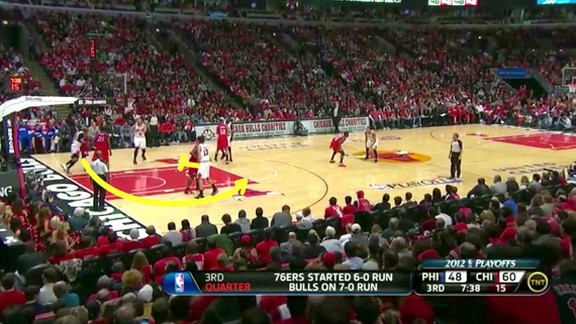 This time, though, Hamilton works all the way through and comes off of the screen on the single side. 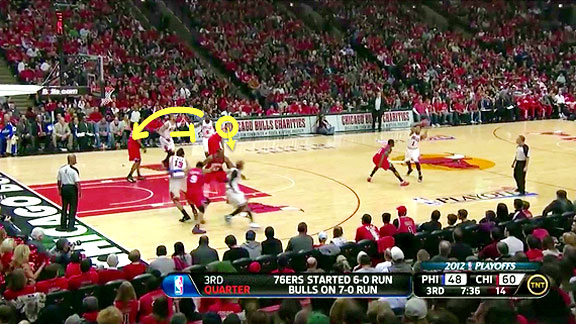 Evan Turner, who is covering Luol Deng, gets caught watching Hamilton as he comes around the Noah screen, which sets up a screen off of the ball. Boozer turns around and sets a backscreen for Deng. 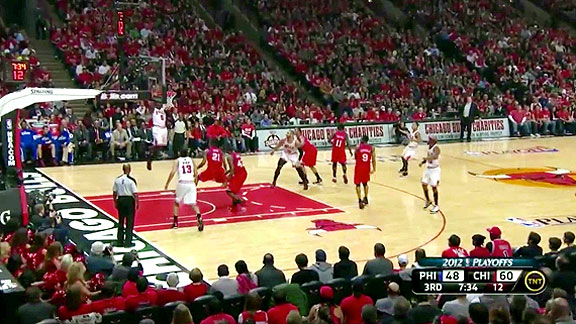 The ball goes to Hamilton. He knows the play is coming and lobs it right to the front of the rim for Deng, who converts. Here is what it looked like live:

This is why Hamilton is an asset for Chicago. He maximizes the potential of the set. With Derrick Rose out for the rest of the postseason, Hamilton (and Korver, who might be the third- or fourth-best player in the NBA when working off of screens) will be even more important.

NBA Playoffs Shootaround: Who Do We Blame for Derrick Rose?