NBA Playoffs Shootaround: Who Do We Blame for Derrick Rose? 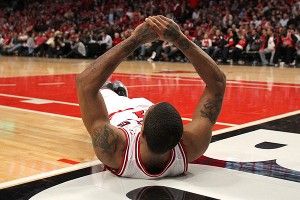 So much amazing is happening here, and the Shootaround crew is here to help you keep track of it all. You’ll find takes on moments you might’ve missed from the previous night, along with ones you will remember forever.

Who Do We Blame for Derrick Rose?

Blame me for what happened to Derrick Rose.

About five minutes before the Bulls’ title hopes crumpled onto the United Center floor, I’d just said how I was glad Rose was still playing against Philly, how after missing nearly 30 games he could use all the game-speed minutes to be had. Then I screamed “Noooooo!” for a good 30 seconds while pressing the rewind button over and over.

My feelings on the decision to keep Rose in the game haven’t changed, and probably won’t. I have too much negative energy focused elsewhere to engage in the Tom Thibodeau blame game. The Bulls will still dispatch Philadelphia with a roster used to playing (and winning) together. That’s probably where it ends.

Defensively, everything is still intact, and in the end, that will always be this team’s biggest strength. The issues arise in those instances when the court gets smaller late in games, and if the Bulls do play Boston and its defense, the points they squeezed all season out of spacing and ball movement become harder to come by.

So while a lost chance to compete is something to lament, part of me knows this team wasn’t ready for Miami anyway. The real blow is what this means for Rose going forward. So much of his game is predicated on that step to the rim, and in the chance it never does come all the way back, what then? Chris Paul’s name has and will be mentioned a lot in the next year, but that comparison is far from reasonable at this point. There isn’t the same intelligence and aptitude for getting where he wants to be on the floor whenever he wants to be there. The bridge to a new version of Rose would be a longer road than the one to this version of Paul.

For now, Bulls fans will be left to wonder what might have been, and for that, I can’t apologize enough. — Robert Mays

Rajon Rondo says: “As I was walking, I thought he stopped. My momentum carried me into him. I even think I tripped on his foot. I didn’t intentionally chest bump him, but that’s what it appears to be.” It’s not fun to contradict my dude, but within 10 replays it was clear that Rondo — yes, after tripping, and after having his momentum carry him — did jut out the chest, just the tiniest bit. It’s more fodder for the “Rondo is a hot shot/head case” files, I guess, but a couple more inches of space between him and Mr. Marc Davis and Rondo doesn’t connect, and then we’re dealing with one measly technical foul and no probable suspension. (It’s called “moral luck.” Learned about it in freshman-year philosophy. NBD.) By the way, how perfectly, coldly analytically Rondo-esque is the “that’s what it appears to be”? Whatever else he is, Rajon Rondo is certainly the greatest secret automaton playing the game today. — Amos Barshad

Last night, Chris Paul reminded us that when your team ends the game on a 28-3 run for an epic come-from-behind victory in the playoffs, you are allowed to do and say anything on national television. Chris, being a calm and collected guy 99.999999 percent of the time, doesn’t take too much advantage of this, and only has two outrageous (and fantastic) outbursts. First, he states, “everybody knows how much I hate to get my lip busted,” which is just an absurd thing to assume everyone knows. And then second, to wrap up the interview with Craig Sager, he says, as he’s walking away, “That’s a nice suit you got there. EASTER PAST, THOUGH. EASTER ALREADY WENT BY.” Classic execution of the “dis and walk away,” Chris; that obviously wasn’t your first rodeo.

In-Studio Commentary Moment of the Weekend

“He took a Cliff Robinson shower.” — Charles Barkley. OK, is this a thing? Kenny and Shaq laughed like this is a thing. Barkley was referring to the fact that Caron Butler managed to fracture his left hand, shower, and get suited up in time to be on the bench for the end of the Clippers’ comeback in Memphis. So is a Cliff Robinson Shower the NBA version of a Silkwood Shower? Is it a UConn thing? I think we know what Robert Caro‘s next book should be about. — Chris Ryan

Will all due respect to LeBron’s trimmed shrubbery, James Harden’s undergrowth, and Baron Davis’s gravy bib, the man whose facial foliage saved the day was Reggie “Big Handsome” Evans. In 21 minutes (where the Clippers were +23), he yoked 13 rebounds, blocked a shot, and went 3-for-3 from the field, all while playing doberman defense against oversize Grizzlies like Marc Gasol. Oddly enough, Evans was once traded by Philly to Toronto for Jason Kapono — who is the EXACT OPPOSITE PERSON. — Ben Detrick

While the Grizzlies will rightfully be today’s cover children for gagging on a certain victory, let’s take a moment to point and laugh at the Indiana Pacers.

Against Orlando, a team whose mighty front line consists of Big Baby, Earl Clark, and Ryan Anderson, Indiana went scoreless for the last 4:05 of the game, including an impotent 0-for-9 stretch of shooting from the floor. Meanwhile, the Magic scored 11. Danny Granger, allegedly an underrated star who toils in the anonymity of the cornfields, went 0-for-2 from the floor, 0-for-2 from the line, and turned the ball over once. That’s roughly the basketball equivalent of ending a first date by vomiting chicken tikka malasa into your lap — Detrick

Hero of the Weekend: Nick Young

As someone once said to me on Twitter after I commented on Nick’s interesting offensive choices, the part of Nick Young’s brain that causes shot-selection shame has been replaced with swag. If someone constantly plays with a mojo consistent with being the greatest offensive player in the history of basketball, there is bound to be a moment, however fleeting, where it happens. The three straight 3s for Young to cut Memphis’s lead from 12 to 3 is probably the best moment of Nick’s (and my) young life.

Here’s to watching him bomb ill-advised 25-footers for the remainder of the playoffs in hopes of recreating it. — Mays

Our Nominee to the President’s Council on Physical Fitness: Zach Randolph

A friend of mine who watches a lot of basketball probably said it best a few weeks ago when we were discussing the Hawks: “If there was one thing that could drive me to drink, it would be growing up a Hawks fan and watching Josh Smith every night.”

For some (including me), Smith currently holds the mantle of “Most Maddening NBA Player,” and Sunday afternoon, nearly every element of that experience was on display. But while the number of terrible jump shots still hovered somewhere between Jordan and Jamal Crawford, the parts of Smith’s game that make him one of the most talented guys in the league won out. Smith added 18 rebounds to go with his 22 points, was a force for Atlanta on the defensive side of the ball, and was the point man of the Hawks’ offense over the final few possessions (which included a hand-in-the-face jumper to push the lead back to 7 and a great drive-and-kick to Jeff Teague for an open 3).

Even down 1-0, it still feels like Boston has the edge, but with a possible suspension looming for Rajon Rondo, Atlanta might be able to win this thing. If Smith can keep making me throw three or four fewer things a game, he’ll be the biggest reason why. — Mays

Without Rose, the Bulls Play Up the Rip Factor