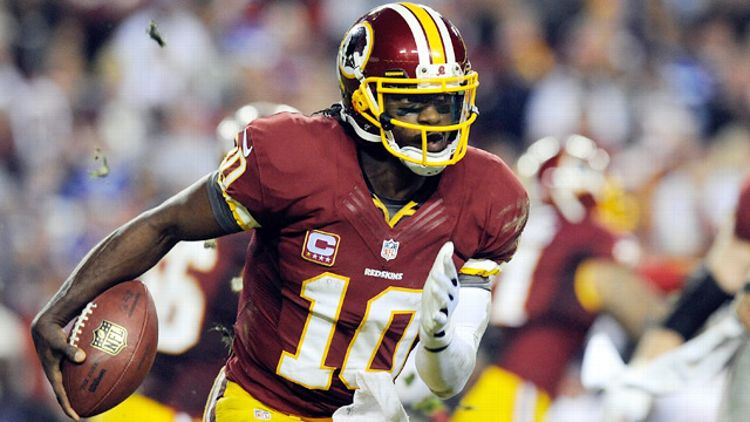 With Tom Brady and Peyton Manning still dissecting defenses, this weekend’s game between the Seattle Seahawks and Washington Redskins might not produce this year’s Super Bowl winner, but it may still be the key to the NFL’s future. Since their 3-6 start, the Redskins are on a seven-game winning streak, during which their already potent offense stabilized into one of the best in the league. Seattle, on its own five-game winning streak, has coalesced into arguably the best team in football. After outscheming the Chicago Bears en route to a dramatic overtime victory, Seattle pulled off one of the greatest three-game stretches in league history by bludgeoning the Cardinals, Bills, and 49ers, a stretch during which they outscored their opponents 150 to 30.

Among similar dominant stretches in NFL history, one that comes close was by the 1940 Chicago Bears, whose streak culminated in a 73-0 victory over the Redskins in the NFL Championship. That record offensive output followed totals of 47 and 31 points in the previous two weeks. The success was the direct result of a switch in offensive scheme by legendary Bears coach and owner George Halas, a switch that helped turn a 7-3 Bears loss to the Redskins earlier that season into the most lopsided championship game in any major professional sport. Halas, frustrated by his offense, turned to good friend and Stanford coach Clark Shaughnessy for help.

At the time, every NFL team ran the single wing offense, a shotgun-based attack with an unbalanced line where the ball was typically snapped directly to the tailback. Shaughnessy — first at the University of Chicago, where he and Halas became friends, and later at Stanford — had revived the old T-formation, which placed a quarterback directly behind the center. Shaughnessy updated the T to include a variety of motions and misdirection to buttress the running game and bolted on an all-new passing attack. The combination made the offense nearly unstoppable — at least in college. Even as late as 1940, most pro coaches viewed the T formation and its reliance on the quarterback making fakes and dropping back to pass as a bizarre gimmick. That is until Chicago ripped through the latter part of its schedule, and, with Sid Luckman as the prototype for a new era of “T-formation quarterbacks,” built a dynasty.

The offenses led by Russell Wilson and Robert Griffin III aren’t nearly as revolutionary as the attack those Bears made famous, but as was the case with Luckman, it’s a new type of dynamic quarterback that has made the game’s evolution possible.

Of the two, Seattle still runs the more traditional attack, one that blends a few zone reads and other read-option plays into its pro-style offense. Mike Shanahan’s Washington Redskins, however, have almost entirely synthesized their coach’s pro-style system with the Pistol Offense Chris Ault first unveiled at Nevada, and the results have been devastating.

What makes the Redskins’ pistol attack so effective is that, while some of the specifics — and certainly the rare talents of RG3 — are new, the underlying principle is the same one that makes any offense work: It puts defensive players in conflict. Over the course of the season, Mike Shanahan and his son, offensive coordinator Kyle Shanahan, have settled on a simple four-concept sequence that takes advantage of specific defensive responses.

The first and most central concept — at least in terms of notoriety and the pressure it puts on defenses — is the inside-zone read option. The Redskins only use this a handful of times per game, especially given Griffin’s recent knee injury, but it sets up everything else they do. 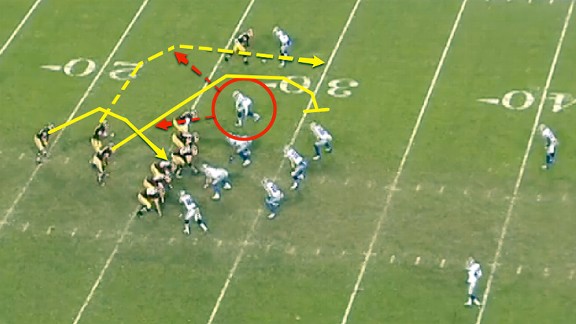 The Redskins’ favorite way to run the zone read is to use what Chris Ault, the recently retired head coach at Nevada and the inventor of the Pistol Offense, calls “Zone Bluff.” On the play against the Cowboys shown above, the Redskins ran an inside zone to their right, with Alfred Morris as the (potential) ball carrier. The first wrinkle here is that both Morris and Griffin open up away from where the play is going so Griffin is able to read the defensive end — in this case, DeMarcus Ware — to determine whether to give the ball or keep it. Morris’s job in particular is to begin to the left but to bend back to the right while looking for a crease in the defense. On this play, Ware crashes down toward Morris, so Griffin pulls the ball. 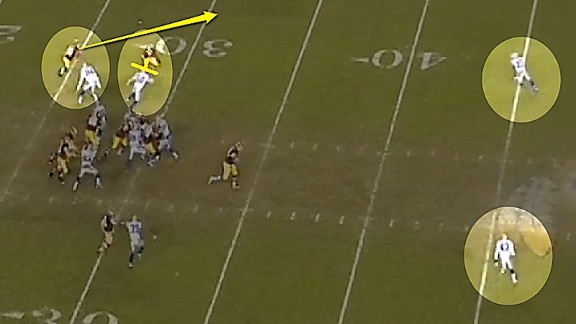 This is where “bluff” comes in. The fullback, Darrel Young, “arc blocks” back to the left. Young’s job is to “bluff” that he is going to block Ware, but then bypass him and actually block the outside linebacker. This technique serves several purposes. First, it prevents defenses from playing games on the back side like the “scrape exchange,” a scheme in which the defensive end crashes toward the running back while the linebacker swoops around to take the quarterback. (This is the tactic the Patriots used to foil Tim Tebow’s attempts at the zone read in last season’s playoffs.) It also causes extra indecision for that defensive end. Not only is Griffin reading him, he has a fullback coming at him full speed. Defensive ends have specific techniques to deal with a blocker like this, but they aren’t compatible when the end is the key on a zone read.

One potential defensive response to the zone read is to bring a safety down to be an extra run defender. The problem with that, as the Cowboys found out on Thanksgiving, is that Griffin is the real deal as quarterback.

In their first matchup, Cowboys defensive coordinator Rob Ryan seemed determined to take away the Redskins’ running game and stacked the box to do so. The result was 304 yards and four touchdowns for Griffin on 27 attempts — a gaudy 11.3 yards per pass attempt. The biggest play of the game was also the one that shows the exact problem with using safeties as extra run defenders against the zone read. On this 68-yard TD to Aldrick Robinson, Griffin and Morris lined up in the pistol and faked another zone read option, which allowed Robinson to slip all the way behind the far safety. It was the start of a 28-point second quarter for the Redskins. 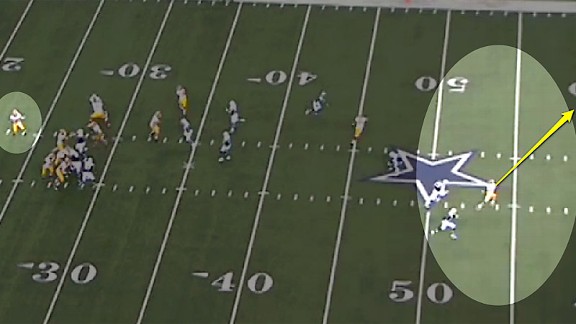 Griffin has been great all season, but these are wide-open receivers, and they’re open because of the incredible conflict the defenders are in. The way Washington uses Griffin’s skills puts more stress on defenses than does traditional play action. The question was whether Griffin could mature and be accurate enough to make defenses pay. We have our answer on that.

Griffin’s ability to run the zone read and the play action off it are the elements that have turbocharged Washington’s offense this year, but they’ve also become consistent enough to win seven in a row because of Morris and the Shanahans’ traditional pro-style running game.

To go with the zone read concept, Washington has added another traditional pistol play type in which the quarterback does not make a read, but simply hands the ball off. While on Bluff, the fullback would run at the defensive end but “arc” around him to block a linebacker; here, he has a simpler task: to smash the defensive end and take him out of the play. 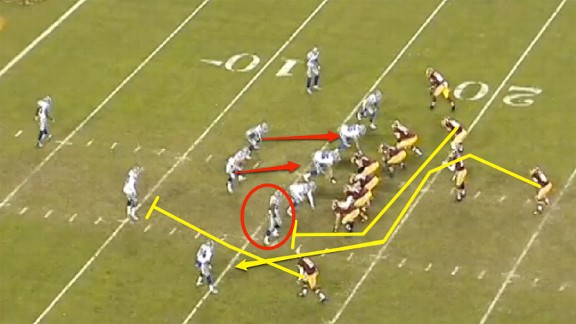 In the second quarter last week against the Cowboys, the Redskins ran this play from the 17-yard line. Seeing the zone blocking to the right, DeMarcus Ware (who was partially hobbled by injury) stepped down. As he did, the Redskins’ H-back came flying from the right side, and, instead of bypassing Ware, laid into him. 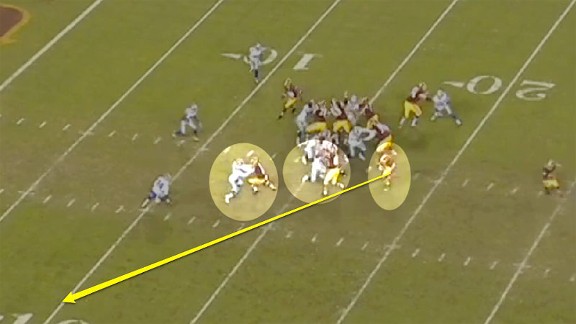 With Ware focused on all the action going to the right, Washington was able to hook him inside and allow Morris to cut all the way back to the left for an easy touchdown.

By this point, with the Cowboys already off-balance, Washington still had one more card to play. By the end of this season, it might actually become their best one: the outside zone to Morris.

Using it to rack up huge yards for Terrell Davis and two Super Bowls for his team, Mike Shanahan — with help from Alex Gibbs — almost single-handedly made the outside zone play famous during his time in Denver. It remains the cornerstone of the Shanahan running game, and it’s also the link between the old Shanahan offense and the new, explosive one he, his son, and Griffin have developed in Washington. 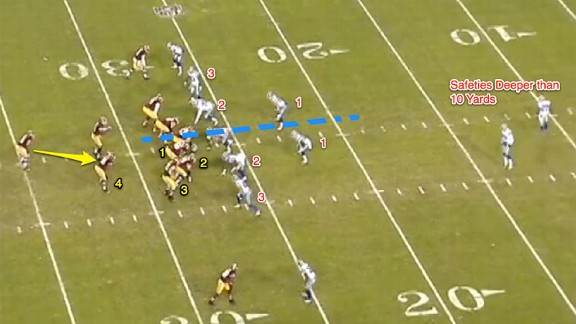 In the diagram above, you see a Cowboys defense that simply cannot stop everything. They have their safeties playing deep in fear of the big play, and they’re playing a defensive front that can’t account for an offensive formation with a strength to the right side because of the confusion Washington has thrown at Ware all game. The result is that the Redskins can simply run the outside zone with a lead blocker — the play they’ve wanted to run all along! — right at a Dallas defense that doesn’t have the numbers to stop it. 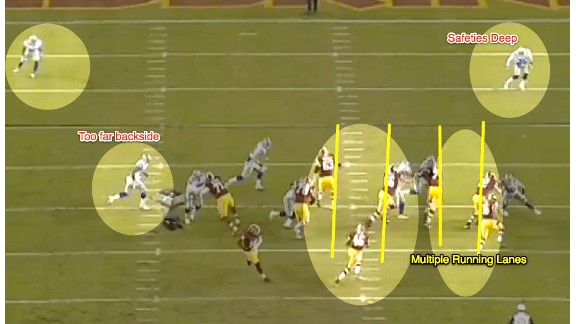 This is how Alfred Morris racks up 200 yards rushing on 33 carries against a defense that knows it’s coming. It’s because they know everything else is coming, too.

Unlike Halas and Shaughnessy’s updated T-formation attack, the Pistol Zone Read, even when synthesized with traditional pro-style plays, is not a football revolution. But as was the case when the T-formation was first introduced, if the Redskins execute correctly, the defense simply doesn’t have enough numbers to defend everything. This season, if anyone can, it’s Pete Carroll and his Seattle staff.

Carroll, who learned at the feet of legendary NFL defensive coordinator Monte Kiffin, believes in an attacking, downhill 4-3 Under. Kiffin originally developed the defense to defend option attacks while he was at the University of Nebraska before he and Tony Dungy refined it with the Tampa Bay Buccaneers to deal with the West Coast Offense. The strength of the defense is not only its simplicity, but also its flexibility.

That flexibility will certainly be required against the Redskins’ varied approach, but fortunately for Carroll, he not only knows his defense — he has the players to run it. Chris Clemons, Richard Sherman and a returning Brandon Browner each have the physical dominance to make well-designed schemes look ugly, but the most important player for Seattle is one arguably more dynamic than Griffin or Morris: Earl Thomas.

To match up with teams like the Redskins, whose quarterback is a threat to both run and throw, the safety must be able to both play deep (as he would against a traditional pro-style passing quarterback like Brady or Manning), and to play up at the line (as he would against an old-school triple team like old Nebraska squads). Fortunately for Carroll, Earl Thomas might be able to do it all, and the combination of his playmaking ability with big, physical corners like Sherman and Browner have me convinced that Carroll and the Seahawks have the recipe to deal with Washington.

CourtVision: Attack Guards and the Slow Retreat of Deron Williams