CourtVision: Attack Guards and the Slow Retreat of Deron Williams 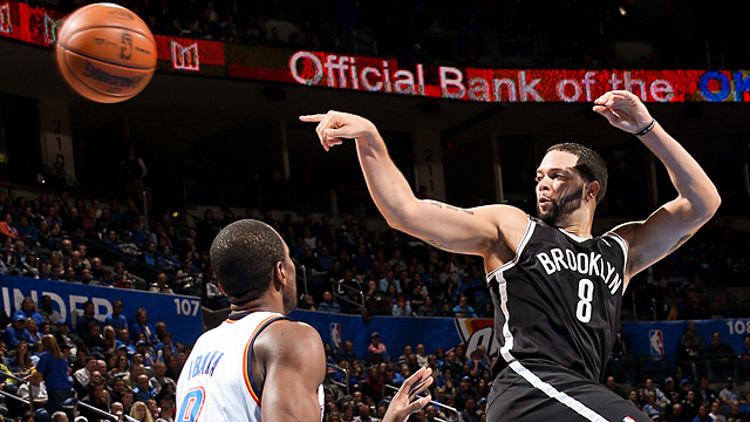 On the November 7, 2012, episode of Pardon the Interruption, Tony Kornheiser and Mike Wilbon interviewed Dork Elvis, a.k.a. Houston Rockets GM Daryl Morey. During the interview, Kornheiser asked Morey the following questions: “Is there a specific statistic, Daryl, that you look for in a player that counts for more than any other statistic out there? Is there one thing that you might see that appeals personally to you?”

Morey hesitated, Kornheiser pressed, then Morey suggested that he loves guards who get to the rim: “We really like guys who can attack the hoop. Our point guard, Jeremy Lin, is a great example; so is James Harden. Point guards who are a little more traditional, a little more safe, and stay within their lane, I don’t think they impact winning as much as people think. I like having multiple attack guards and playing with pace.”

Good things happen when guards “attack” the basket. Aside from the obvious — layups and dunks — less apparent results like offensive rebounds, defensive fouls, free throws, and assists are also more likely to occur when attacking guards get near the hoop.

But what makes an attack guard? How do we identify these guys? Perhaps the simplest (although definitely not the most rigorous) way is to find guards who take the most shots near the rim. An average NBA guard shoots 2.9 attempts at the rim per 40 minutes of play; however, many guards are much more active near the basket than that. Using shots near the rim as our basic criterion, the top five attack guards in the NBA per hoopdata.com* are:

The bottom five are:

*Guards averaging at least 25 minutes per game during the current season.

Clearly these two sets of guards approach scoring in different ways. Those top five players attack the basket, draw fouls, and change the shape of the defense. The bottom five guys spend their time jump shooting away from the basket. Unfortunately, one challenge with characterizing “attack guards” is that players’ styles can change over time; there is no better example of this than Jason Kidd, who used to be one of the league’s most prominent attackers, but now he rarely jogs inside the 3-point line on offense. It’s actually very common for aging NBA guards to temper their attacks and rely more on jump shooting. Perhaps the most noteworthy contemporary example of a player in the midst of this kind of passive evolution is Brooklyn’s Deron Williams, who is attempting 2.8 shots near the rim per 40 minutes this season — a value that’s much closer to the bottom than the top.

After 31 games, Williams is shooting a career-low 39 percent from the floor. This is startling, but only gets worse when you consider he has only made more than half of his shots in two games this season. While it’s tempting to infer that his shot is failing him, the sneaky thing about field goal percentage is that it often is just as much a reflection of where a player is shooting as much as it is how well that player is shooting.

When we see a drop-off in a player’s overall field goal percentage over time, this almost always indicates they are getting to the rim less often and relying on jump shots more often. For example, Pau Gasol is also shooting a career-low 42 percent from the field this year; however, in the Lakers’ “new and improved” offense he is shooting from beyond 16 feet a lot more often this season than ever before. Almost half of his field goal attempts this season come from beyond 16 feet, while last season less than one-third of his shots came from that zone. Gasol provides a great reminder that we must be aware of the spatial dimensions of field goal percentage and cognizant that only in rare circumstances can drastic changes in field goal percentage not be attributed to a significant shift in the player’s spatial shooting behavior. 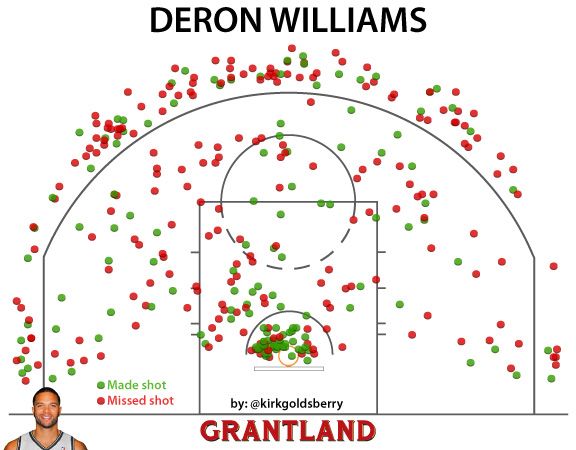 That brings us back to Deron Williams. Although his minutes and possessions remain constant over time, we have witnessed a precipitous decline in his attacking. Williams is a slightly below-average NBA jump shooter, and over time his scoring has become more reliant on this mediocre facet. As a result his efficiency has suffered. Whether it’s endemic of aging, fatigue from his Olympics experience, or the stratagems of his coaches, the trends are undeniable: Deron the jump shooter is a less effective player than Deron the attack guard. Williams’s at-rim activity is down 50 percent from its peak value in the 2007-08 season, when — by no coincidence — he also set his career high in field goal percentage. Good things like points, assists, and free throw attempts happen when he attacks. The bad news for Nets fans is that Williams has not been nearly aggressive enough this season. The good news is that the season is still young enough for that to change. But here’s the question: Is Williams young enough for that to change?