Why I Am Rooting for Duke: An Argument in Seven Ascending Steps 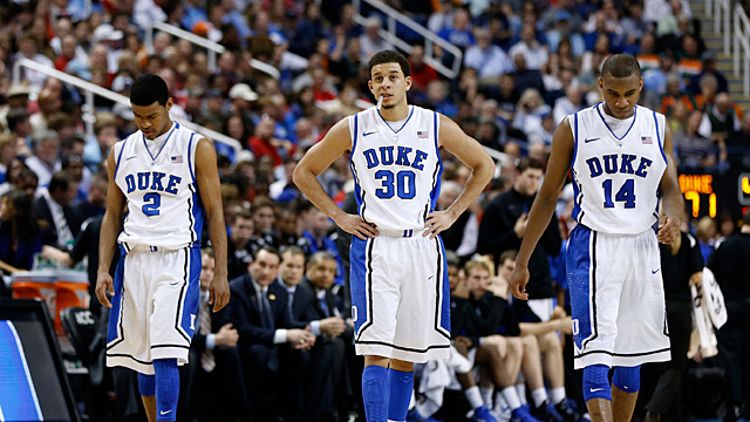 I tend to root for Duke University in the NCAA basketball tournament. They’re not my favorite team, but I’m happy when they succeed. People are sometimes mystified by this affinity, since the Internet has conditioned us to believe we’re ethically obligated to hate every player who has ever contributed to that particular program. As such, on days like today, I am often asked, “Why do you root for Duke? Why would anyone root for Duke?”

Here is my reasoning, in seven ascending steps:

1. I care about college basketball.

3. Because I prefer college basketball to pro basketball, I embrace a position that runs counter to something obvious and undeniable. I’m expressing preference for a version of the sport in which the participants are not as talented. But this is still easy to do: I don’t watch sports exclusively for the outcome or the performance. I mainly watch sports because they’re interesting, and because they often have a meaning outside of themselves.

4. Because I watch sports for the degree to which they are interesting, I am compelled by contradictions. I like things that validate the opposite of whatever straightforward logic would seem to suggest.

5. Because I am compelled by contradictions, I am drawn to Duke’s paradoxical success. Over the past 25 years, Duke has had exactly one bad team. This is amazing when you consider the limitations of their talent. Outside of Grant Hill and Elton Brand, how many Duke graduates have turned into top-tier pros? Those two names are pretty much the whole list. You could make a strong argument that Luol Deng is the third-best player they’ve ever produced. (Shane Battier, who’s never been the third-best player on any NBA roster he’s been a part of, might be fourth overall; Christian Laettner was underrated as a pro, but he only made the All-Star game once; Carlos Boozer is hard to quantify; Jeff Mullins played 40 years ago.)

Traditionally, Duke’s greatest players are only slightly better than good. If the 12 all-time best Duke alumni (at their professional peaks) played the 12 all-time best North Carolina alumni (at similar apex levels), the Tar Heels would win by 30. Assuming the game was uncoached, a Duke all-star squad might lose to the ‘84 Tar Heels, and that team didn’t even make the Final Four. Yet Duke-UNC remains an annual toss-up. Every season, Duke’s collection of high-end role players defeat at least 10 teams who would kill them on the playground. And they do this by retaining and perfecting the enduring qualities (and the arcane strategies) of non-pro basketball.

6. Because Duke succeeds with an anti-pro style and subpar athleticism, the Blue Devils are the “most collegiate” major college basketball team. It’s not even close (Indiana is second, but a distant second). It’s almost like they’re a caricature of what people who love college sports supposedly desire. They evolve, but just barely.

7. Because Duke is the “most collegiate” college basketball team, rooting for Duke is rooting for college basketball as a whole. Their games matter way more, if for no reason other than the sheer number of people who obsessively hate them (and are thereby rooting against their own best interests, assuming they want the college game to remain relevant). If you care about something, you should want to see it flourish. When Duke wins, everyone cares.