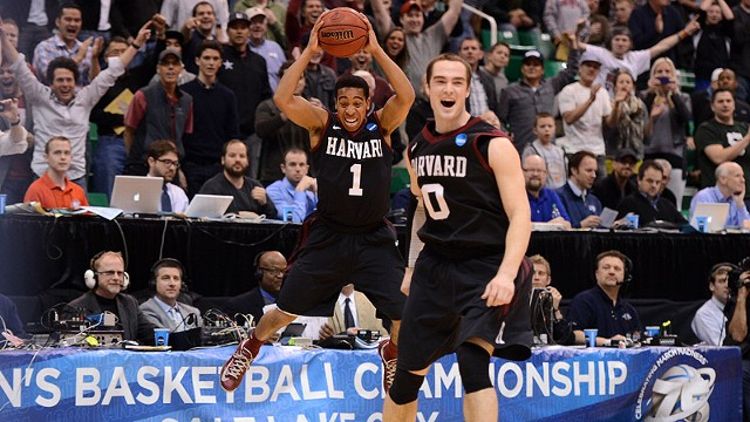 Oklahoma State and UNLV spent earlier parts of yesterday becoming the latest victims in the history of 12 seeds beating 5s, but the biggest upset of the night came amid a wave of blowouts during the last set of games from the opening day of the NCAA tournament. The trendy upset picks — Davidson (still don’t know how they lost) and Saint Mary’s — had already failed in their quest for a Cinderella moment, before lowly Harvard, the Ivy League afterthought, finally toppled a giant. With a 29-5 record that earned them a no. 3 seed, New Mexico was ranked 72 spots ahead of their opponent according to KenPom.com’s rating system and was considered a sleeper pick for a Final Four berth in the West region.

On paper, this was a terrible matchup for the Crimson. Their frontline rotation contained no one taller than 6-foot-8 to match up to the Lobos’ twin towers of Cameron Bairstow (6-9) and Alex Kirk (7-0). Given such a disadvantage in size, it was quite shocking to see head coach Tommy Amaker ask his Harvard big men to battle Bairstow and Kirk one-on-one all night in the post. But it was that decision that swung the entire course of the game.

By going with single coverage on the Lobo post players, Harvard eliminated a strategy — doubling or aggressive helping down — that typically leads to a bevy of open shots (mostly from 3) created by the post player passing out. The move gave New Mexico head coach Steve Alford plenty of incentive to pound the ball into Kirk and Bairstow on the block nearly the entire first half. The heavy emphasis on those two early on basically eliminated any chance for the Lobos’ primary wing scorer, Tony Snell, to affect the first 20 minutes of the game — a major win for Harvard despite the fact that Kirk and Bairstow combined for 37 points and 21 rebounds over the course of the night.

But the success of the New Mexico big men on the offensive end paradoxically had a negative, two-fold effect when combined with Harvard’s offensive strategy. The Crimson’s goal on offense was to use large amounts of the shot clock, swinging the ball around the perimeter in their 4-out, 1-in motion system before finally looking to create a drive-and-kick opportunity that led to a corner 3 in the final third of the possession. With their opponent’s slow-footed bigs being kept on the floor because of their offensive production, life for Harvard’s guards and shooters — particularly Siyani Chambers and Laurent Rivard — was made substantially easier.

Had New Mexico gone small in an attempt to halt Harvard’s long-range attack, it may have helped stave off the upset bid. But by keeping both Bairstow and Kirk on the floor for the vast majority of the time, the game essentially boiled down to a showdown between New Mexico’s close-range 2s versus Harvard’s aerial assault from behind the arc. This worked to the underdog’s advantage in a huge way, as the Crimson made five more 3s than the Lobos (thanks largely to the efforts of Rivard), producing a 15-point edge that New Mexico couldn’t make up by having its big men get to — and convert at — the foul line at a high enough rate.

This strategy worked last night, but had New Mexico’s roster contained more athletic perimeter defenders, or had Harvard simply gone cold from 3-point territory, the Crimson could have just as easily been part of the parade of blowouts that marked the end of the first day’s madness. But part of becoming a giant-killer is having luck on your side. Amaker’s unheralded Ivy League group saw their vital 3-point shots find the bottom of the net enough times to propel them to a 68-62 victory and the biggest upset of the NCAA tournament so far.

Why I Am Rooting for Duke: An Argument in Seven Ascending Steps