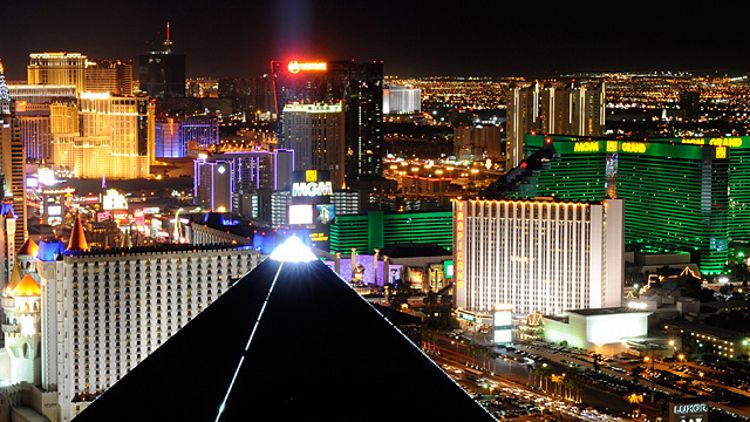 A few minutes before 8 a.m. yesterday, the line extending from the LVH sportsbook stretched back about 50 yards from the sign above its entrance. Those making up its tail end exchanged knowing looks as each new member asked the obligatory Is this the line? before taking his or her spot in front of the trio of blackjack machines on that end of the casino floor.

Seventy-five minutes before tipoff, this was the queue to make bets at the country’s biggest sports book on the country’s biggest sports day. The wait time stood at about 45 minutes, and as gamblers slowly rolled forward, faux-knowledge slowly rolled back. Someone a bit further up would mention that Bucknell on the money line looked attractive, and in a degenerate game of telephone, the conversation would trickle to the rear. An hour or so before tipoff, a man in a red UNLV T-shirt, who’d clearly been there before, but clearly never on this day, said what so many others were thinking. “This is fucking unbelievable.” Actually, it’s the first day of March Madness.

Inside, the LVH sportsbook is a massive wall of televisions with a limited well of seating. Even this early, trays were full with glasses of brown liquor and glasses of orange juice, and it was evident that many had staked their claim some time earlier. While fliers for the MGM Grand’s new poolside day club are becoming the hotel’s wallpaper, the LVH has a morning soundtrack featuring Frankie Valli. There’s no confusing that its draw is rooted largely in its sports-betting offerings, and yesterday, everyone seemed to be partaking. Sheets listing the betting options — individual spreads, over/unders, regional odds, national championship odds — covered every table.

Outside the book and just around the corner — only a few feet from where the line was ending — is the 1,500-seat theater that plays host to major sporting events. As tipoff approached, there were still seats to be had, and the crowd was full of the types one would expect to find in a sportsbook for 12 hours on a Thursday. The Julius Jones Cowboys jersey would’ve been the day’s most obscure if it weren’t for the Shannon Brown alternate Cavaliers jersey spotted just a few minutes after. At about 9:10, just a few minutes before Valparaiso and Michigan State kicked off this year’s tournament, a man in a green T-shirt walked back toward the theater door. On his shirt was an ad for an escort service — phone number and all — and on his head was a hat normally reserved for In-N-Out Burger employees.

For most of its 40 minutes, Valpo-Michigan State was a dud of an opener. The Spartans cruised out to a lead, and it was one they kept almost all game. What happened late seemed insignificant at the time, but if we’d known how the rest of the day would go, it would’ve been a piece of gambling drama to which the crowd would’ve cherished. In the final minute, Valpo picked away at Michigan State’s lead, trimming it all the way down to 13. A murmur started, likely by those holding tickets with “Michigan State -10.” When a stolen inbounds pass cut the lead to 11, the murmur became cries of horror. The next try went smoothly, and as the Spartans dribbled out the clock, the tension was replaced with claps and high fives.

The early games left the theater mostly uninspired. Bucknell and Butler had a few moments, but by the end, the Bulldogs were in control. The most impressive feat of the day’s early slate probably belonged to D.J. Stephens. With a two-foot, one-hand throwdown against St. Mary’s, the Memphis forward managed to elicit a reaction from the crowd that had nothing to do with financial interest. When the Gaels nearly stole the game away from Memphis late, the cheers returned to their wallet-based motivation.

Like it’s known to do, Davidson provided the day’s first real excitement. By the game’s final stretch, it had built enough of a lead to put a cover out of play for Marquette, and the crowd began to shift in favor of the upset. When the Golden Eagles managed their miracle finish, there wasn’t much of a reaction. If people were losing money anyway, they’d rather root for the story.

Interest in Southern’s bid to upset Gonzaga built slowly. The game had been relegated to the two outermost screens on the theater’s front wall, and without sound, few people noticed how small the deficit had become. By the time everyone realized how close history was, it was already gone.

From there, the day’s doldrums set in. Double-digit poundings were the standard, and by 5 p.m., the extended effects of beer and dim lighting took their toll. More than one person in the theater’s back section was slumped over in his chair asleep, all while friends snapped photos.

As VCU, Colorado State, and Syracuse laid waste to their opponents, Harvard gave everyone in attendance one final, if sparing, bit of entertainment. Concern had been mounting from the first half on for those with their money on New Mexico, and by the game’s home stretch, some had managed to escape the malaise and throw themselves into one last deciding moment. Like had happened with Davidson, the game’s spread was eventually too far out of reach, and several people noted that at this point, it would probably just be better to see Harvard win. By the time the Crimson did, the claps and cheers were sparse. Most had arrived 14 or so hours earlier, and the emptying of the theater was slow. As most of those still around made their way toward the back, a man in a Missouri T-shirt remained in his seat, on the aisle in the last row. He took each of his tickets and tossed them in the air, one by one, watching each float to the floor in front of him.