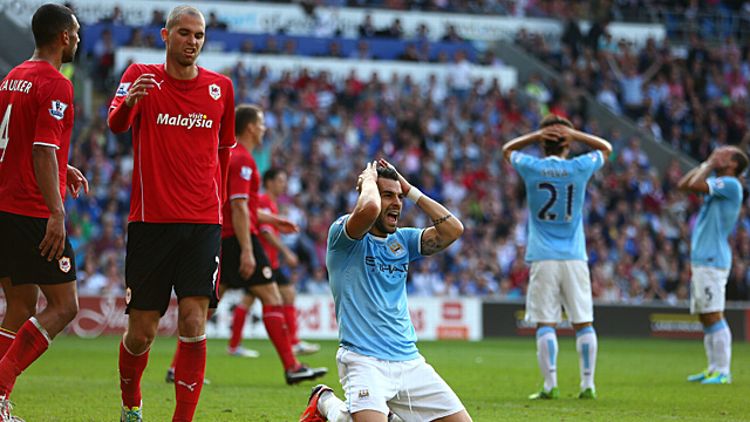 It hasn’t exactly been a scintillating start to the Premier League season. With 40 games played, there have been a grand total of 78 goals scored. That average of 1.95 goals per game is significantly behind last year’s average of 2.80, and also below the Premier League’s historic average (since 1992) of 2.63. It’s been particularly disappointing, given the preseason story lines that focused on new exciting, attacking teams. This raises the question: Why has scoring dried up in the Premier League?

I’m afraid we’re going to have to talk about some math. Now, in the world at large, and the sports world in particular, people are becoming more and more comfortable with the idea that luck, chance, or random variation plays an important part in how things happen.

Not everything has to have a reason; sometimes stuff just happens. In fact, one of the biggest tensions between traditional sports journalism and analytics-based sports coverage is that where journalism sees a narrative of causality that numbers can either prop up or disprove, statisticians interpret the burden of proof in the other direction, holding to the belief that everything is just random chance until proven otherwise. Seen through that lens, 78 Premier League goals in the first 40 games is nothing. After all, the season is 380 games total. Weird stuff happens all the time. Prove it isn’t just chance and then we’ll talk reasons.

A couple of different people approached the problem. The first insight came from Mark Taylor at The Power of Goals. Instead of looking at the league-wide scoring average, he looked at a model of how many goals teams would likely score in their opening matches, based on a range of factors. Then he simulated the first 39 games of the season (before Monday’s Liverpool match against Swansea) thousands of times. What he found was that only once, out of every 185 times this season was played, would we see 74 goals or fewer in the opening 39 games.

Simon Gleave, head of analysis at Infostrada Sports, looked at historic stretches of 40 games to see how often 78 goals or fewer were scored. Not to ruin the surprise, but the answer was not too many. Looking at every top-flight season in England since 1968-69, he found only 25 separate instances, including this season, or a 0.66 percent chance that a random stretch of 40 games would have these few goals.

Players are taking the wrong kinds of shots

According to the Expected Goal model, developed by Colin Trainor and Constantinos Chappas, both the quality of shots and their execution have degraded from last year. Expected Goal takes into account factors like shot locations and types, mixes in some special sauce, and comes up with a probability of shots being converted. Given the shots taken in the first 40 games this season, we should have roughly 14 fewer goals than we did in the beginning of the 2012-13 campaign. But, in reality there have been 35 fewer goals this season, meaning that due to a combination of bad luck and whatever mystery cloud is hanging over this season, a lot of shots that might normally hit the back of the net have gone wide or off the crossbar or into the stands, or just plain missed.

The squads of Spurs, Norwich, Sunderland, and Cardiff all look drastically different from last season’s. On the managerial side, aside from Arsene Wenger not a single Premier League manager has been with their team for three full seasons. Of the 20 Premier League managers, seven have been at their current station for less than a full season. Of those seven, only Roberto Martinez at Everton and Mark Hughes at Stoke have come in with attack-minded mandates.

Speaking of managers, in general, it’s certainly possible that the ever-evolving tactical battles of the modern game are affecting this season’s start. More teams than ever are implementing high-energy defenses looking to pressure attacking sides, rather than a more conservative defensive block. Has the shift in tactics contributed to defenses regaining the upper hand? It’s impossible to say, but it is certainly true that where once deep defending and direct counterattacking was the preferred strategy of midtable squads (like, say, Aston Villa under Martin O’Neill, or Bolton under Sam Allardyce), now the likes of Southampton and Sunderland are looking to energetically press even elite squads, squeezing the life out of the midfield rather than the final third.

Last point on the managers: It’s worth mentioning that we’ve lost Alex Ferguson and seen the return of Jose Mourinho. Ferguson spent the past couple of years consistently defying Manchester United’s underlying statistics and turning what seems like it should have been a mediocre attacking squad into a dominant force. He’s gone, and it’s worth wondering whether those magically created goals have left with him. At the same time, Jose Mourinho is back at Chelsea. Mourinho is like some sort of weird anti–King Midas in the Premier League where everything he touches turns into not goals. In fact, five of the 40-game stretches that Gleave uncovered in his study happened during Mourinho’s first stretch in the Premier League.

Remember that first Chelsea game of the season, when it seemed like the Blues could have put eight goals on Hull, but Mourinho took his foot off the pedal and had Chelsea shore up defensively? That’s the anti-Midas touch.

Will this course correct itself? The start to this season has been so low-scoring that the pace of goals almost can’t help but increase. That doesn’t mean that whatever helped cause the drought in the first place is changing back. The reason that the lack of goals has become so apparent is the combination of variance and some likely structural changes. As goal scoring picks up, that very well could be variance doing what variance does, reverting back to more normal levels. Extreme events often mean luck plus something else, but when the world spins back into the more commonly tread territory it becomes much harder to say whether it’s variance or something more substantial that’s moving the needle.

So let’s all look on the bright side. Yes, the Premier League this season has subjected us to a dire first 40 games, but that means we’ve pretty much got nowhere to go but up. And without the extreme doubt there wouldn’t be enough evidence to definitively say that something strange and interesting is going on this season. It’s a narrative story line that even soccer analytics can get behind. Where did all the goals go? Let the crazy, unsubstantiated speculation commence.