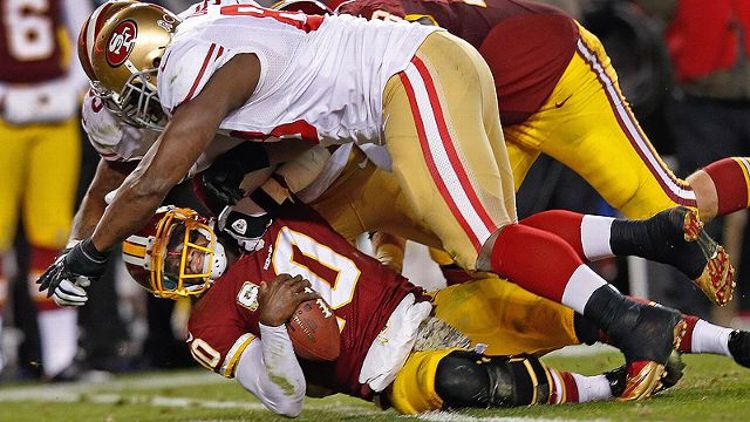 What a difference a year makes. Last season, Washington’s nationally televised Thanksgiving-week game was an exhibition for the league’s most exciting new offense — a 38-31 win in Dallas that was never actually that close and saw Robert Griffin III throw what is still a career-high four touchdowns. With the late-November stage again last night, the results couldn’t have been more different. The win over the Cowboys was the second in a run of seven straight toward the playoffs. Yesterday’s sputtering, almost pitiful performance against the 49ers was Washington’s third loss in a row, and Griffin’s four touchdowns were replaced with numbers like this:

Redskins had 6 drives in 2nd half. Longest one went 9 yards.

Washington is now 3-8 and done in an NFC East race that hasn’t been particularly tough. It’s a big fall for a team that won the same division a year ago, but in some ways, it’s not an altogether surprising one.

On offense, much of the blame has fallen on Griffin — some of it warranted, some of it not. There’s no denying that Griffin has been worse in his second season than in his first, when he was Offensive Rookie of the Year while Russell Wilson and Andrew Luck also took teams to the playoffs. His completion percentage has dropped nearly six percentage points, he has already thrown more than twice as many interceptions, and his yards per attempt has dropped from a league-leading 8.1 to 7.1. When he struggled early in the season, it felt like with more time to get comfortable on his surgically repaired knee, everything would be fine. It hasn’t been, but that’s far from Griffin’s fault.

When Washington went on that late-season run a year ago, it was possible thanks to its defense. Abysmal for much of the first half, it strung together performances just solid enough to buoy Griffin and the offense over the final seven games. This year, that hasn’t happened. Washington is 27th in defensive DVOA (compared to 17th a season ago) and 31st in scoring defense.

One of the ways Washington could have helped protect its quarterback is by leaning on the running and play-action games that were actually what helped make the offense what it was a year ago. Last season, Washington used play-action on a league-high 42 percent of its plays (according to Football Outsiders) and also had the largest disparity in DVOA between play-action and non-play-action plays. Play-action isn’t nearly as effective when the threat of running is removed, and with how often Washington has trailed this year, its run-pass ratio has changed significantly. Alfred Morris is still averaging 5 yards per carry, but Washington ran the ball 519 times a year ago compared with 442 passes; this year, that relationship has gone back the other way. It’s on pace to run 486 times and pass 593 times — almost a third more attempts than it put up a year ago.

Griffin’s numbers haven’t been the same, but he’s also been put in far less advantageous situations. With Colin Kaepernick’s offensive line and Wilson’s defense, San Francisco and Seattle were far better positioned to withstand opposing teams acclimating to the pistol and option offenses. At this point in his career, still just 26 starts in, Griffin and a pretty suspect receiving corps don’t have the dropback passing game to consistently win shootouts. This is an offense based on easy throws, either because they’re short, quick passes or they come from play-action. This year, those easier throws have been harder to come by.

The cruel irony in all this is that one of the reasons Washington’s defense has struggled so much is because of Griffin. With the 22nd pick in April’s draft, the Falcons took cornerback Desmond Trufant, who has played very well as a rookie. The original owners of that pick? That would be Washington, which shipped it to St. Louis as part of the trade for Griffin. The situation will be similar — worse, actually — this year. With Washington stumbling, its pick will likely end up near the top five, but it will again send it to St. Louis, the final piece of a trade that’s looking progressively worse.

At this point, it’s impossible to say who will historically be viewed as the winner of that deal, but so far, the opportunity cost Washington forfeited for its franchise quarterback is glaring. This is a defense that aside from Brian Orakpo, Ryan Kerrigan, and Barry Cofield is trotting out below-average players at nearly every position. The hope is that 2013 second-round pick David Amerson will be better next season, but the list of promising young players who might develop into something doesn’t extend much past that. Josh Wilson is 28, Brandon Meriweather is 29, and the linebacking corps and defensive line aren’t much younger. Maybe no defense in football has needed an infusion of young talent in the past two years more than Washington, and no team has had fewer chances to find any. That problem extends to free agency, where a salary-cap penalty extending back to deals made in the uncapped year left Washington without valuable room this offseason. The team reportedly attempted to lure Aqib Talib but was hampered by the lack of money available. That’s the exact sort of player who could have made a major difference. Washington will get some of that space back next year, and it should have a few options with which to bolster the defense.

The reality about this season — and last night — is that it looks worse than it probably is, in the same way that last year looked better. (One area where Washington hasn’t struggled is actually pass protection, where tackles Trent Williams and Tyler Polumbus have actually been quite good this year. But they were manhandled last night by Ahmad Brooks and Aldon Smith, and that left an already struggling offense looking completely hapless.) The records might be starkly different from this year to last, but the team is more similar than it appears. It’s a roster void of defensive talent, reliant on a still-developing quarterback bound to struggle a bit on his second trip through a league now familiar with him and his offense. Times are dark in Washington, but they’re not as dark as they seem.