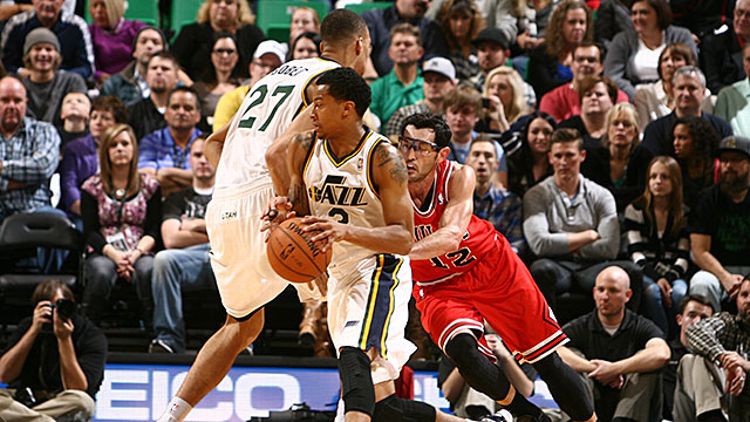 Destiny, Thy Name Is Boozer

Carlos Boozer and Luol Deng combined for more than half of the Bulls’ field goal attempts, which makes sense. When your best offensive weapon goes down, you look to the next-best options. To a degree, it worked. But the Jazz’s young frontcourt was also shorthanded, with Enes Kanter out because of injury and Derrick Favors in foul trouble for most of the night. This left the task of guarding an energized Boozer to the likes of Marvin Williams and rookie Rudy Gobert, human magic beanstalk. Boozer won’t have such favorable matchups in the future.

And, to their credit, that Jazz tandem did a pretty good job. Deng took the game into his own hands in the second half, but still only managed to shoot 4-for-13 in the final 29 minutes of the game. On one play, he found himself in a trap near midcourt, flanked by Williams and Gobert, which forced him to pass to an unprepared Marquis Teague to beat the shot clock. On a crucial possession near the end of the fourth quarter, Deng wasn’t able to shake hero-of-the-game Richard Jefferson (!) and hoisted a bad shot. The Bulls weren’t particularly fun to watch last year without Derrick Rose. It seems optimistic to think the offense will even be able to ascend to those levels this season.

Per NBA.com, the Bulls’ offense was more or less the same whether Rose was on or off the floor, but with him on the court, it was at least able to flash the potential of dynamic shot creation on any given possession. Now the Bulls don’t even have the threat of it at their disposal. It’s easy to imagine the Bulls longing for the days when Nate Robinson and Marco Belinelli terrorized friend and foe with their offensive joyrides. But there are no fireworks left, only the dilapidated structure where they used to go off.

“This is one of the best first quarters the Jazz have put together all year.” [The Jazz scored 23 points on 42.9 percent shooting.]

“You’ve got Marvin [Williams] out there, but besides Marvin, who else can score?”

“That high-arcing jumper from Boozer. We know it all too well. It brings rain and thunder.”

“There’s just a different energy with the Jazz tonight.” (To be fair, Matt Harpring was totally right about the last one.)

Midway through the third quarter, Gordon Hayward bricks a shot so badly it pegs Gobert in the face as it falls from the backboard.

Hayward is now shooting 28.4 percent from the field over his last seven games.

Chicago’s new reality at the point guard position is darker than anyone could have imagined. When Kirk Hinrich bolted to the locker room in the second quarter to tend to a bloody nose and let out some woosahs, Tom Thibodeau put in 38-year-old Mike James, whose last notable NBA season came seven years ago and might be one of the game’s great, inexplicable mirages. On one possession, dribbling downcourt, James lurched forward, sluggishly heaving himself toward the frontcourt with a vacant expression I know all too well. He had meat sweats. Or, wait, no, that wasn’t it. Sorry, he was exhausted. He had only been in the game for two minutes. Mike James, NBA journeyman for the everyman.

After the second quarter, he wasn’t seen from again, presumably because of a play in which Trey Burke, not exactly an elite athletic specimen, zoomed past him without the slightest bit of resistance. You could almost hear the “I’m too old for this shit” sigh he let out once Burke was at the rim. James finished the game with an assist, a hard foul, and a field goal.

Oh, about that field goal: It was the only field goal made by a Chicago point guard in the entire game. Hinrich and Teague combined for 50 minutes on the court and yet the only floor general able to make a basket was the dude who was practically comatose. If it weren’t for a 3-point attempt to beat the shot clock, a turnover, and a foul, Teague would’ve joined Grantland’s own Mark Titus in a bizarro Club Trillion. Teague’s entry would’ve been particularly impressive considering he played nearly 15 minutes in the game.

That’s where we’re at. This is your Chicago Bulls point guard rotation, proof enough that there are no basketball gods. No deity would let this happen.