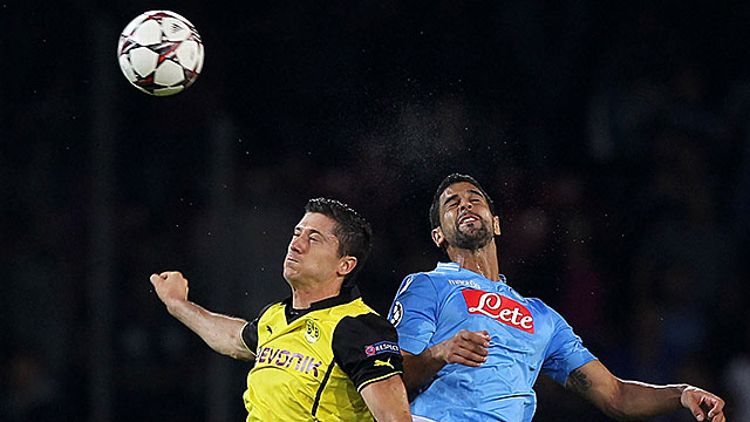 Today in the UEFA Champions League, in Group F, the group of death, some club is gonna die. With Arsenal in control on nine points — close to the 10 points Alex Ferguson always said would get a club to the knockout stages — there remains only one spot for Borussia Dortmund or Napoli. If you’ve watched European soccer over the last few seasons, you know how much this reality sucks.

Assuming that Arsenal beat Marseille tomorrow, and Napoli, who also have nine points, win today, the Italian club will join the Gunners in the knockout round. If Dortmund win, they can still win the group (they have a better head-to-head record against Arsenal). There are a lot of permutations to what can happen, and you can read about them at Goal.com. But the point, basically, is this: Arsenal will most likely go through, and what happens between Napoli and Dortmund today will go a long way toward deciding who joins them. This pretty much sums it up:

It’s important to pull back for a second. Here is a reductive, if fairly accurate, portrait of the scenario: For as long as most people can remember, the same big clubs have run the European football playground — Barcelona, Real Madrid, Bayern Munich, Manchester United, Chelsea, Inter, Milan, Juventus, Liverpool. Those nine clubs have won 15 of the last 16 Champions League finals. They have money and global fan bases who buy jerseys; they develop their own players and make up the buyers market for the best of the rest of the world’s talent. The only way to get into this group, as Paris Saint-Germain and Manchester City are proving, is to buy your way in. For clubs like Borussia Dortmund (who won the Champions Leauge in 1997 and then nearly went bankrupt) and Napoli — hardly in the poorhouse, but nowhere near as wealthy as the aforementioned clubs — a great season is usually rewarded with one of the big or rich (or both) European clubs coming for your best players.

In 2011-12, Napoli were the darlings of European football, inspiring Brian Phillips to write that the Italian club should be your new favorite team. That season saw Napoli finish fifth in Serie A and take part in one of the craziest Champions League knockout ties I’ve ever seen, losing to Chelsea 5-4.

Then they sold Ezequiel Lavezzi to Paris Saint-Germain for €26 million. In 2012-13, Napoli finished second in Serie A. After that campaign, Edinson Cavani joined Lavezzi in the French capital. Why? Because PSG pays him a rumored €256,000 a week to do so. Under Rafa Benitez, Napoli aren’t quite as swashbuckling, but they’re still fun to watch, they still have Marek Hamsik’s crazy hair, and their fans are still out of their minds.

Borussia Dortmund has had a similar trajectory. They won back-to-back Bundesliga titles in 2010-11 and 2011-12 at a time when Bayern Munich were struggling to find a steady manager. They came in second to Bayern, in Germany and Europe, in 2012-13. They have one of the most charismatic managers out there in Jurgen Klopp, their fans are awesome, their stadium is a cauldron …

After the 2010-11 and 2012-13 seasons, they saw their best player bought by a bigger club. First it was Nuri Sahin, who picked up a Bundesliga Player of the Year award and packed off to Real Madrid (he has since returned to Dortmund); then it was Mario Goetze, who joined archrival Bayern Munich at the end of last season. After each departure, Dortmund has tried to restock, picking up Marco Reus, Henrikh Mkhitaryan, and Pierre-Emerick Aubameyang. It’s safe to assume that at least some of their stars — definitely Robert Lewandowski, maybe Ilkay Gundogan and Reus — will be playing somewhere else next fall.

How can Dortmund and Napoli stop this trend? Well, winning their domestic leagues would be a great start. Napoli are six points behind Juventus in Italy (they recently lost to the Turin club, 3-0), and Dortmund are seven behind Bayern in Germany (they also just lost to the league leaders, 3-0). The domestic leagues aren’t out of reach, but I wouldn’t bet anything significant that they can make up their respective gaps.

To stay relevant, and to keep scratching on the door to the Big Club Club, Napoli and Dortmund must find success in the somewhat more accessible world of Champions League. If a club can sell prospective players on regular appearances in and deep runs into Europe’s biggest club competition, they are a much more attractive destination. And if they can receive the financial windfall that comes with advancing in the tournament, they can afford to pay better wages. This — wages — as Cavani or Yaya Toure will tell you (they probably won’t tell you, but you see where I’m going) is the key to everything. You don’t need history, or good fans, or even sunny beaches nearby. You just need money to get into the six-figure weekly salary stratosphere.

This is why Tuesday’s match between Napoli and Dortmund is so huge. One of these teams is going to the knockout rounds with Arsenal, while the other is going into the Europa League — the Old World’s NIT. Instead of playing in globally televised games on Tuesdays or Wednesdays from Camp Nou in Barcelona, they’ll be playing globally televised games (that no one can seem to find on their channel guide) on Thursdays in Dnipropetrovsk. Have you been to Dnipropetrovsk in February? Bring a snood, man. It gets real out there.

Borussia Dortmund and Napoli are supposedly hipster clubs. They are loved by newcomers or front-runners who are conscientious enough not to throw their support behind one of the big teams, but still want a return on their emotional investment. Simply, it feels pretty cool cheering for Napoli or Dortmund, unless of course you mind being called a hipster.

This phenomenon is real enough, I suppose, though I’ve never met a soccer hipster (note: I may be a soccer hipster). It’s not so much about cheering for an underdog; I think what people glom on to with these clubs, and clubs like them, is the hint of something new and fresh. They feel a little less like world football corporations playing in motherships that have landed from space, and a little more like teams. They give you hope that the hegemony at the top of the game (maybe even anywhere) can be challenged. Sure, they buy smaller clubs’ players, just like big clubs buy theirs. And if you really wanted to throw your lot in with an underdog, you’d cheer for Bolton, Chievo, or Hanover. But there’s something rock 'n' roll about Napoli and Dortmund. They live fast, die young, and leave good-looking corpses. It’s just too bad that one of them is probably going out of the Champions League tonight. This tournament could use a little more rock 'n' roll.