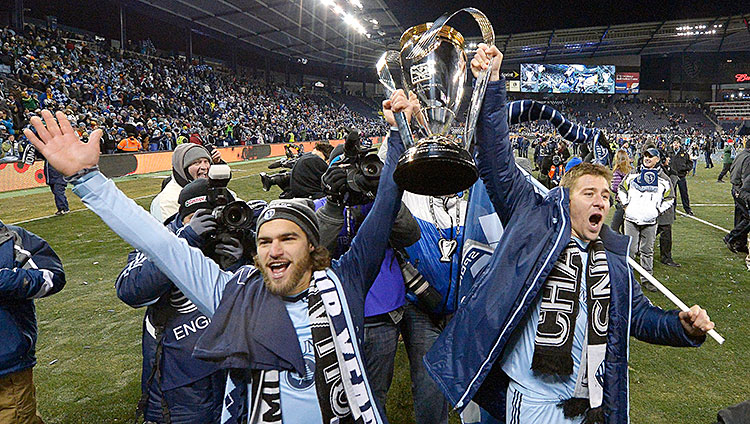 Imagine this scenario: You grow up playing soccer in a suburb of an American city. You’re a talented high school player but not a nationally recognized prospect, and only a few colleges show interest in you. You go to an American university, play in four NCAA tournaments, make all-conference three seasons, and in your senior year you’re named an All-American and the College Men’s Scholar All-America Player of the Year. You’re not a highly regarded professional prospect, but you do well at the combine, and on draft day, to your surprise, your hometown club drafts you in the first round.

You play a small role with the club your rookie year, a smaller one your second year. When you decide to dedicate yourself to becoming a better professional — transforming your body in the process — the club provides you all the support and facilities you need. Your club goes through a rebranding and builds a state-of-the-art stadium, and you earn a starting spot on the team. You and a teammate, who once lived in your basement, become the nucleus of the team, and your side emerges as the best in the league. Your parents are able to come to your games. When you look in the crowd, you see your friends, people you knew growing up. You’re a fan favorite. In your fourth year, you’re named the Defender of the Year.

The next season, your team wins the league championship. Along the way, you earn a starting spot on the U.S. men’s national team. You play all but 45 minutes of four games at a World Cup, and are regarded as one of the country’s best performers.

Now you’re 27. The summer transfer window is open. About 10 European clubs are interested in you. Most of them are middle-to-bottom-of-the-table English Premier League teams. You have the chance to make more money, play better competition, maybe improve your game. Do you walk away from your hometown club, the one that made you who you are, for that opportunity?

That was Matt Besler’s story. If he played any other American sport, he’d be universally lauded as a hero for deciding to stay with his hometown club, Sporting Kansas City. But Besler plays soccer, and for the American soccer player, the decision whether to be a homegrown hero and or a hometown heartbreaker is more nuanced.

Besler’s situation speaks to the Catch-22 of American soccer: Players can develop in America, but, according to conventional wisdom, they need to leave America to become world-class.

Besler and that guy who lived in his basement, Graham Zusi, were two of the first USMNT players to have European clubs express interest in signing them after the World Cup — with Besler getting more attention. The Sporting K.C. duo found themselves at the heart of the debate about where the future of the USMNT might lie: MLS or abroad.

On Saturday, Besler and Zusi announced their decisions: They had signed Designated Player contracts with Kansas City. The reaction to the news among American fans — on Twitter, in comments on articles — was mixed. Some criticized the move (or lack thereof), claiming Besler’s and Zusi’s decisions to stay in MLS showed they aren’t willing to push themselves against the best competition in the world.

That attitude elects to ignore where the sport has come from in America and where it is going.

That marked increase in professional experience is due to one thing: Major League Soccer. The majority of the American-born players on the United States World Cup team — 15 of them — play or played in MLS.

It’s important to keep in mind where the concept of the academy came from: Germany. Yes, the country that just won the World Cup with a bunch of players who had been developed in Germany, by German clubs, since they were kids. Major League Soccer is not the Bundesliga, but the concept is the same: don’t rely on other countries to solve your player development issues; do it yourself. (We’ll see if Brazil gets the message.)

Besler and Zusi, and the majority of players on the national team we just watched compete in Brazil, probably won’t ever win a World Cup. But the younger generation behind them — the 17-to-20-year-olds, the D’Andre Yedlins — might.

One way to help that dream become a reality is for players like Besler and Zusi to stay in MLS, be well compensated for their talents, and have them help develop the next wave of American talent. That’s exactly what Besler can do at Sporting. The club has 17-year-old center back Erik Palmer-Brown, a Homegrown Player who is considered one of the best prospects in America — so good that Juventus tried to buy him in January.

The impact that Besler could have on Palmer-Brown — a hometown kid like himself — shows that Besler might be able to do more for himself in Europe, but he can do more for American soccer in Kansas City.

Andrew Lewellen (@AndrewHLewellen), a former college soccer player and youth coach, has written about the sport for ESPN The Magazine, ESPN.com, the New York Times, and other publications.

Damn, It’s Good to Be the Tigers: In the AL Central, One Trade Is Enough