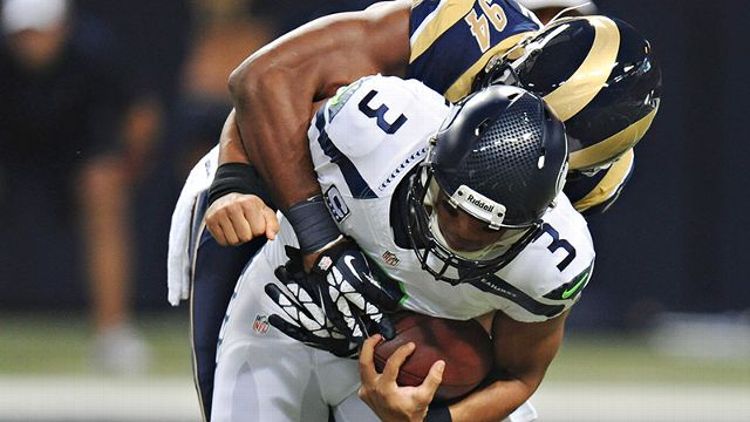 If there were fans who still didn’t know about Quinn before Monday night, I’m guessing they do now. The Rams don’t get many national stages these days, but Quinn made the most of it, tallying three sacks to bring his total to 10 for the season. That’s good for the fourth-best total in football, but I’d argue that Quinn, Justin Houston, and Tamba Hali (really, in any order) have been the league’s best pass-rushers through eight games. Quinn’s sack numbers are excellent, but he’s also hitting and bothering quarterbacks at an incredible rate. The 2011 draft class was already historic, and now Quinn is probably among its best four or five products.

This sounds obvious, but Quinn’s success has been largely dependent on competition. When he comes across a top-tier offensive tackle, it usually means just a few hurries and the occasional sack (which is still a great game for any pass-rusher), but when he gets a chance to face lesser competitors, he feasts on them. Quinn’s two three-sack games came against the Cardinals (and the since-traded Levi Brown) and the Seahawks, who are trotting out guard Pat McQuistan at left tackle. Quinn managed a sack each against the 49ers and Texans (teams that featured perhaps the two best left tackles in the league a year ago), but his overall impact on those games was not nearly as noticeable.

His matchup with Michael Roos is intriguing not just as a way to see what Quinn can do, but also as a means to judge where Roos falls among the left tackle hierarchy. For much of his career, Roos was one of the best pass-blocking tackles in the league, but at 31 his play has slipped a bit this year. Quinn is probably the most significant challenge he’ll face all season, and if Quinn can rack up another huge game, it’ll go a long way in figuring out where both stand at their respective positions.

The last time we saw Vontae Davis play, he was having the game of his career against Broncos wide receiver Demaryius Thomas. The Colts were daring Peyton Manning to beat them over the top, and part of what allowed that strategy to be effective was Davis’s ability to go stride-for-stride with Thomas on the outside.

Chuck Pagano and the Colts have established an identity on defense, and part of that identity is challenging receivers at the line of scrimmage. Thomas is one sort of challenge, but Johnson is an entirely different one. Where Thomas still relies mostly on a combination of speed and after-the-catch ability, Johnson is maybe the purest example of how to play wide receiver that exists in the league. Johnson may be 32, but he’s still a master route runner with a huge frame. Few players understand how to set up defenders or use their bodies better than him. It’s hard to know what the Texans offense will look like with Case Keenum at quarterback, their running backs banged up, and the team just coming off a bye week, but no matter what the approach ends up being, Johnson will likely be a big part of it.

There’s never been a doubt that Davis has the size and speed to match up with a player like Johnson. The question is whether he has the prolonged attention to detail it takes to check Andre Johnson for an entire game. Davis’s performance against Thomas was indicative of how far some parts of his game have come, but Sunday against Johnson will provide a glimpse into an entirely different aspect of his development.

Earlier this week, I ranked the best first-round rookies from this year’s class. One of the major complaints from readers was that the list didn’t include Eddie Lacy — but Lacy wasn’t taken in the first round. If that list were expanded to any rookie from this year’s class, Lacy would probably be somewhere around the top five. He has given a new dimension to Green Bay’s offense, adding consistency in the running game and allowing the Packers to lean on that part of their offense in an effort to keep teams from teeing off on Aaron Rodgers.

In the past four games Lacy has gotten 23, 23, 22, and 29 carries. Green Bay’s offensive line isn’t a group of maulers, but the running game is solid enough that Mike McCarthy doesn’t mind turning to it for stretches. The Packers will still go as Rodgers goes, but I’ll be curious to watch Lacy for the rest of the season, even if a matchup against a beat-up Bears front seven isn’t the best barometer of things to come.

One player we’ll be going out of our way to watch for at least 10 plays.
Mario Williams, OLB, Bills
vs. Chiefs, Sunday, 1 p.m. ET

What a strange career Mario Williams has had. Bill Barnwell and I discussed this on today’s Grantland NFL Podcast, but if you had a chance to go back to 2006 and choose Reggie Bush or Mario Williams with the first overall pick, who would you go with? I landed on Bush, but I don’t feel that strongly about it. Williams’s first season in Buffalo was considered a disappointment despite his respectable sack numbers, and only afterward did we learn that he was going through some considerable personal trouble.

Through eight games this year, Williams has already topped his 10.5 sacks from last year (he has 11), but like it often has been for Williams, that sack total seems deceiving. Many of his sacks come from working back inside to bring down the quarterback after he steps up in the pocket. Williams deserves at least some credit for being so adept at that, but at the same time, it’s a good indication of why sacks are sometimes a misleading stat when judging how disruptive a pass-rusher is. I’m interested in watching Williams play against Branden Albert on Sunday, just to get a look at how often he’s altering a quarterback’s options, rather than dragging him to the ground after a play has already broken down.