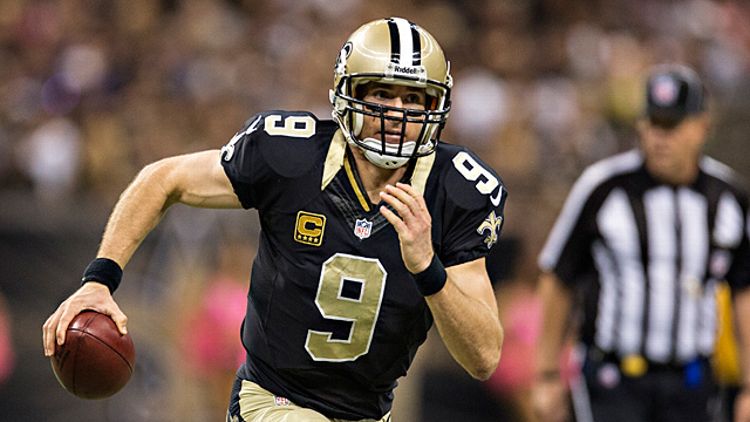 Warning: This blog is being written by a grown adult male who has overdosed on Nerds and tropical Starbursts and is completely full of false bravado after sweeping the board with his Week 8 prop bets. Please proceed with caution.

Saints under 26 points scored vs. Jets

If Rex Ryan is to be taken seriously after last week’s shellacking, he’ll need to devise a plan to keep the Saints offense off the field by controlling the ball against his shaggy yet schlubby brother’s unit. Sounds dirtier than it is. Former Saint (now Jets running back) Chris Ivory can help with this game plan as New Orleans gives up an unimpressive 4.8 yards per carry. On the other side of the ball, the Saints’ two lowest point totals have come on the road this season. I’m predicting partly Breesy with a small chance of Sprolesing — points in the low to mid 20s. 25,000 jermajesties

Steelers +4 in the first half over the Patriots

I realize that traditionally, betting against New England at home is about as wise as forcing yourself into a photo op with Chris Brown, but this Patriots team is a mere shell of its former invincible self. Don’t worry — I’m aware that the Steelers suck more, but coach Mike Tomlin keeps it slow and steady for the first 30 minutes as Le’Veon Bell torches the NFL’s 31st-ranked rush defense. Pittsburgh will stay close in the first half before Bill Belichick pulls some fourth-quarter magic out of his spy cam … err … ass. 20,000 jermajesties

Maybe I just want to be there when Chris Johnson has his annual “OK, I’m ready to pad my ho-hum stats in a big way” game. Maybe the air is chilly enough for Ray Rice to awaken out of his rushing coma. Or maybe this is all just wishful thinking as I have held on to these juggernaut turned ne’er-do-well running backs in the two fantasy leagues I wasn’t unceremoniously kicked out of. Yep, that’s probably it. 10,000 jermajesties each

Cowboys (-0.5) over Vikings
Christian Ponder, Matt Cassel, Joe Webb, and Jaaaash Freeman are all salivating at the chance to further expose old man Kiffin’s sievelike secondary. Unfortunately for them, the Cowboys’ zig is about to zag. This is the game in which the Cowboys convince people they’re good again — a bunch of forced turnovers, DeMarco Murray runs wild, etc., and then nine days from now, it zigs again as Drew Brees puts up triathlon distance numbers against us. Same old drill for the same old Cowboys.

Falcons (+18) over Panthers
Carolina is good, but not yet ready to ruin a three-team teaser by defeating a desperate division winner by three TDs. Don’t worry — I’ll let you know when they are.

Seahawks (-7) over Bucs
I hate giving 7 on a three-team teaser when ties lose — unless you’re giving the 7 to a rookie quarterback who’s leading his 31st-ranked offense against a bloodthirsty Seahawks front seven in a venue where you can’t hear yourself fart. 40,000 jermajesties

After the country had a chance to witness the Cowboys star wide receiver mic’d up, it became apparent that Dez was actually uttering positive statements during his sideline histrionics in the final moments of the Dallas-Detroit game. I have to say, more impressive than his ability to wrestle a ball from two defenders in midair is his ability to praise a teammate while looking like he’s going to rip his throat out through his colon. He’s officially the worst charades player in the history of the NFL.

372,000/1 odds that you can name all three deals that occurred on the trade deadline

The odds should actually be higher because … well … because it was a trick prop. There was actually only one deal made. The Eagles traded defensive tackle Isaac Sopoaga and a sixth-round pick to the Pats for a fifth-round pick. According to ProFootballFocus.com, Sopoaga ranked 46th out of 68 defensive tackles, rendering this the most insignificant NFL trade deadline in recent memory. And here I was thinking Bucs coach Greg Schiano to Minnesota for a used first-edition iPad was a lock.

65,000/1 odds the small group of men (I’m guessing these professional degenerates have penises attached to their bodies) responsible for setting the over/under of the Thursday night game at 43 win the 2014 Nobel Prize in Economic Sciences

Yes, I consider football gambling an economic science, and so should you. Forty-three seemed like the perfect line when overtime kicked off at 20-20. Cameron Wake’s sack of Andy Dalton in the end zone kept the total under. And just like that — the 81 percent who had the over were desperately searching for razor blades in their kids’ candy apples.

I’m guessing the fat jokes are a lot easier to swallow (see, I did it again) when your team gets off to an 8-0 start.

Your 3-year-old son in any Monsters, Inc. costume (-135) is scarier than Chip Kelly’s offense

Is it possible Chip Kelly was kidnapped after the first Monday-night game, when his Eagles offense scored every 39 seconds against the paltry Washington Redskins, and was replaced by Romeo Crennel, who will eventually be credited for pulling off the Halloween costume of the year?

Meriweather said early in the week that he may have to start aiming for player’s knees rather than continue to get fined and suspended for hitting high. And far be it from me to defend a Washington Redskins player, but I don’t blame Meriweather for his frustrated comment. I’m fully aware of the seriousness of head injuries in the NFL and my heart goes out to anyone suffering from such complications, but it is becoming nearly impossible for defenders to play tackle football in 2013. Roger Goodell and the rules committee need to come out with a chart illustrating where you’re actually allowed to hit a ball carrier. So far, if my calculations are correct, there’s a four-square-inch area a shade northeast of a player’s pancreas that’s still fair game.

@TheCousinSal Another great week in the supercontest. 7th place halfway through season. You aren't bragging about this nearly enough.

Actually, @HousefromDC and I were tied for eighth entering this week, and with the miracle Dolphins win Thursday night, we could be as high as second or third. So there you go. I just put a massive jinx on myself just to satisfy one Twitter follower. Happy, Daniel?

Wish you would step back from that ledge, my friend @TheCousinSal

For me, the only thing worse than a devastating last-second Cowboys loss is getting a Third Eye Blind song stuck in your head for five days. When it comes to the Cowboys’ questionable coaching decisions, pitiful defensive play, and overall stupidity … I will NEVER understaaaaaaaand.

1/9 odds that during their adulthood, either of the adorable twin girls featured in this hidden-camera bit for Jimmy Kimmel Live, in which I pretend to be a clerk at a candy store, ever forgets to request double-bagging at a grocery store

And my sincerest apologies to the mom of the two Pixy Stix–addicted girls, who is now forced to deal with them for the next dozen years before they move (or twitch their way) out of the house.