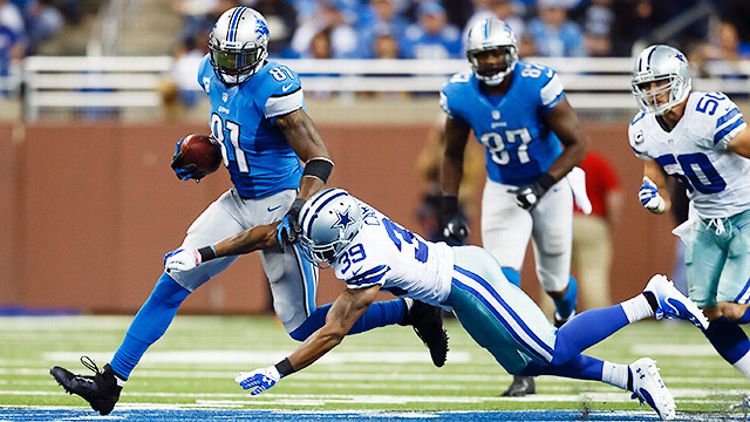 Don’t be alarmed if you notice a preponderance of C.J. Spiller jerseys in your neighborhood on Thursday night. Spiller was easily the most frequently cited player in the fantasy horror stories you guys sent me after Week 8, and thus should make a wonderful Halloween costume for those looking to strike fear into the hearts of others. In fact, there’s no shortage of costume ideas when it comes to underperforming or injured football players, as evidenced by the following responses.

@mattborcas last week I traded Forte for Marshall. You know the rest.

Joshua is right: I do know the rest. You do, too. But this is a house of horrors, not a house of sympathy, so let’s cover the rest in excruciating detail.

2. Days later, Forte rushes for 91 yards, three touchdowns, and 28 fantasy points in Washington while Marshall posts one of his worst outings of the season.

Further probing revealed Joshua’s motives. In addition to Forte, he owned a robust stable of running backs (LeSean McCoy, Eddie Lacy, Stevan Ridley), and Randall Cobb’s fractured fibula more or less blew Joshua’s receiving corps to smithereens. So while this deal was perfectly defensible given Joshua’s needs, it’s hard not to wonder how much more Forte could’ve netted poor Joshua after Week 7, and that’s the type of thought that can haunt an owner for months. Years, even.

@mattborcas Got on the Daryl Richardson bandwagon and refused an offer of Mike Wallace for him one-for-one.

When I solicited reader horror stories, I was expecting plenty of responses involving Mike Wallace. But I certainly wasn’t expecting Wallace to be on the positive end of those stories. Imagine a Friday the 13th sequel in which Jason Voorhees was the good guy, because an even darker villain made him look virtuous by comparison. That’s what Sean’s dealing with here, and it may be the most damning indictment of Daryl Richardson to date.

Like Hannibal Lecter, Diana wines and dines her victims to make them feel comfortable. Then she hoodwinks the hell out of them. Ruthless.

Gosh, this had to look so good on paper, which makes it 100 times more horrifying in retrospect. I mean, Martin, Spiller, and Richardson were all consensus first-rounders who should’ve formed an unbeatable RB1-RB2-Flex trinity. Instead, Martin’s labrum is torn, Spiller’s left ankle is worn, and Richardson looks just plain forlorn. I had a friend who roomed with high school buddies in college, thinking it would be the “DREAM TEAM,” only to discover that one was an extreme hoarder, one’s alarm clock went off at five each morning for ROTC, and one kept a stash of lunch meat under his bed, so maybe Mr. Melter Skelter can relate to that guy.

Ben, you could’ve ended that list with Allen. There’s no need to scare the living daylights out of folks by reminding them of the Jared Cook bandwagon, Tavon Austin’s preseason hype, or the fact that I totally bought into DeAndre Hopkins’s 17-point Week 2, which turned out to be a massive outlier.

@mattborcas My horror story: my two receivers are Julio and Reggie Wayne. I was 4-1 at one point, now I'm not sure I'll make the playoffs.

Unfulfilled post-draft expectations are one thing, but in a way it’s much worse to have the rug pulled out from under you by a devastating injury or two. At 4-1, Damian was probably already counting his prize money, if not spending it, and who could blame him? There was no reason for him to believe that his season had already peaked and that a slow, methodical decline was looming.

After Julio’s relegation to IR, maybe Damian claimed Harry Douglas or Terrance Williams off waivers, hopeful that his receiving corps could still hold its own against lesser opponents. Of course, hope is no match for football’s cold, uncaring injury bug, and Reggie Wayne’s subsequent ACL tear forced Damian to confront the realization that his roster was unsalvageable. Harry Douglas is a lot of things, but he’s definitely not a WR1.

@mattborcas two years ago, due to injuries I had to start Donald Brown and Marcel Reece. In a championship matchup. Does it get scarier?

No, Alex, it does not get any scarier than that. Frankly, I’m shivering at the thought of a Donald Brown–Marcel Reece tandem of death determining the outcome of your league’s championship, and I really need to move on to the Weekly Awards to calm my nerves. If y’all are in the mood to get scared some more, just read the rest of the comments from last week’s post.

Considering they possess one of the league’s worst red-zone scoring percentages, the Giants might as well trot out Brown as soon as they reach field goal range. At the very least, it’s a surefire way to cut down on turnovers. Still, owners shouldn’t commit to Brown until Tom Coughlin commits to the all-Brown-everything offense, because despite Sunday’s 18-point outing, Brown remains no. 25 among all kickers in fantasy points scored. Moreover, there’s no need to waste a roster spot on a kicker whose team is on a bye this week. But we’ll always have this box score, and that’s something.

You Don’t Own Me, But I’m Awesome:

Scream “outlier” all you want regarding Marvin Jones, but the dude has scored double-digit fantasy points in three straight games. In those games, he’s seen eight more targets than Mohamed Sanu, and yet Jones remains available in 99 percent of ESPN.com leagues. Of course, Jones won’t catch four touchdowns in a single game again anytime soon, if only because Andy Dalton is exceedingly unlikely to pass for four-plus touchdowns again, but Jones has emerged as a consistent part of Cincy’s offense and is worth a waiver-wire claim.

Three’s a Crowd, Dez: Jones’s only peer in Week 8 was, who else, Calvin Johnson. But there was a third wheel among fantasy receivers this week. “I believe I can do whatever [Johnson] can do,” Dez Bryant snarled in a midweek radio interview, and at that point he was right from a fantasy perspective. Heading into Sunday’s matchup, Dez led Calvin in fantasy points, 89 to 82, which is pretty amusing in light of the historic receiving day Johnson delivered on Sunday. Megatron dwarfed Dez in receptions (14 to 3), yards (329 to 72), and, most importantly, fantasy points (36 to 19), and has reestablished himself as fantasy’s top receiver. Doesn’t it feel like Johnson’s knee injury happened months ago? This is why you drafted him in the first round over a supposedly elite running back, and this is why you’re probably well-positioned to make a championship run come playoff time.

All that said, Dez’s sideline antics were significantly more entertaining than anything Megatron did on Sunday, so I’m going to post a GIF here, mostly because it features a very flustered Derek Dooley.

Good Quarterback Gone Bad: Forget RG3’s stupid knee injury, which appears to be no big deal. Instead, focus on the three ghastly turnovers, the insanely low completion percentage, and the fact that this all came against a pretty bad pass defense. Hell, Griffin couldn’t even manage his usual barrage of garbage-time stats, which has been the only saving grace for his fantasy value this season. Sam Bradford is outscoring Griffin, and Bradford is on IR. The only silver lining here is that Kirk Cousins played even worse, destroying the possibility of an RG3 benching. Though frankly, a benching may have been the best possible outcome for all involved parties.

Sadly, as long as Griffin starts, his owners are probably stuck with him. Unless Andy Dalton or Alex Smith is available in your league, it’s not like there’s a better option for you to nab on the waiver wire. Griffin remains capable of the occasional 25-point performance, but at this rate, he’ll probably injure his knee again before enjoying another big day.

Maybe the 49ers Should Forget About the Forward Pass: Congratulations, Jim Harbaugh! You just beat the unconquerable Chad Henne in London, and now you get to enjoy a rest-filled bye week. Walk your dog, go see Blue Is the Warmest Color, and catch up on some sleep. You deserve it. Additionally, purchase a paper shredder and delete any trace of the passing game from your playbook, at least until Michael Crabtree returns.

This may seem excessive, but Colin Kaepernick is such an effective runner, Jim, and you’re finally beginning to exploit that. Sometimes a man’s gotta go big or go home, and you’ve never struck me as the type to go home. Don’t you want Colin to overtake Alex Smith on the fantasy points leaderboard? That’s what I thought.

The lightly owned players worth targeting this week.

1. RB Andre Ellington, Arizona Cardinals (available in 78.9 percent of ESPN.com leagues): Sure, Ellington’s 80-yard touchdown run was impressive and exciting and something Rashard Mendenhall could never hope to accomplish, but Ellington’s other 14 carries were, in aggregate, far more encouraging. That’s because Ellington gained a solid 74 yards on those touches, proving he’s not merely a boom-or-bust back, but rather one who can withstand a semi-heavy workload. Ellington is the first widely available back with considerable long-term upside to surface in quite a while, so add him now despite Arizona’s Week 9 bye.

2. WR Marvin Jones, Cincinnati Bengals (98.9 percent): As I said earlier, Jones is supplanting Sanu as Dalton’s second-favorite target and seems to have a knack for the end zone. Of course, Eddie Royal had a knack for the end zone once upon a time, and it’s possible that Jones’s touchdown production will also begin to wane. But I think Jones’s hot streak is much more sustainable, largely because teammate A.J. Green attracts so much attention from opposing defenses.

3. QB Terrelle Pryor, Oakland Raiders (74.7 percent): Pryor might be the only legitimate Plan B for disgruntled RG3 owners, who’d be wise to add Pryor due to Griffin’s lingering injury concerns. (As we found out Sunday, Cousins is not a viable QB1, and thus not a viable handcuff for Griffin’s owners.) And with Peyton Manning, Matthew Stafford, and Kaepernick on byes in Week 9, Pryor makes a decent fill-in.