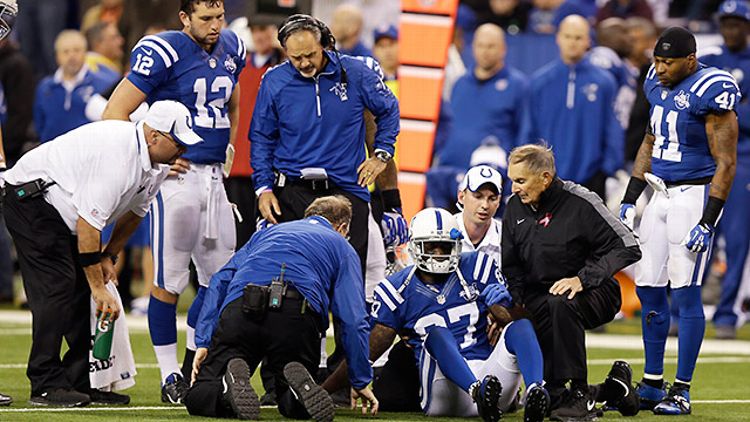 Do you remember the way ambulances would drive on the field in Madden ’92, flattening anyone in their path?

Well, that’s more or less what Week 7 was like in the NFL. If you play football (or just Madden), there’s a 95 percent chance you suffered a sprain, strain, tear, pull, fracture, toothache, dismemberment, or death by ambulance on Sunday. Grad students could write dissertations on ESPN.com’s gargantuan injury wire, which requires its own Cliffs Notes and figures to translate to the big screen someday. Think Playmakers meets Operation meets — you guessed it! — Madden ’92.

Alas, the fantasy implications of the Week 7 carnage are vast. Even if you don’t own Jay Cutler, for example, you’ll feel the effects of the QB’s groin tear if receivers Brandon Marshall or Alshon Jeffery are mainstays in your starting lineup. With that in mind, I’ve assessed each fantasy-relevant injury to the best of my abilities. While I’m not yet a board-certified physician, I’ve visited medical professionals many times and thus can be trusted more than some NFL team doctors.

• Colts WR Reggie Wayne: torn ACL (out for the year). The Colts may have won their game against the Broncos, but they lost a key veteran contributor in Wayne. Indy receiver Darrius Heyward-Bey will try to fill the void; he’s available in 96.2 percent of ESPN.com leagues and probably warrants a claim, depending on the state of your receiving corps. Additionally, T.Y. Hilton and Coby Fleener should become more consistent forces in Indy’s offense, because with Wayne and Dwayne Allen on IR, Andrew Luck doesn’t exactly have a bevy of pass-catchers at his disposal. Consider Hilton a low-end WR2 going forward.

• Buccaneers RB Doug Martin: torn labrum (out for the year … or at least a very long time).

As @MikeGarafolo said, Bucs RB Doug Martin suffered a torn labrum yesterday against the Falcons, and is out for the year.

Greg Schiano just said he does not think Doug Martin is done for the season. Also called Goldson "Day to Day". Rare good news in Tampa.

The waiver-wire rush for Tampa Bay backup Mike James is understandable, because it never hurts to own a starting running back. It’s also ill-advised, because James is an exceedingly pedestrian football player. There’s no reason to think James can do any better than Martin, whose 3.6 yards per carry and measly one touchdown made him more of an RB2 than the high-end RB1 he was drafted to be. Go ahead and add James, but only if it’s to remove the stench of Willis McGahee from your roster.

• Texans RB Arian Foster: “mild” hamstring pull (day-to-day). With a bye looming in Week 8, it seems unlikely that Foster will miss any games if he’s already “day-to-day.” The real takeaway here is that you probably shouldn’t invest in his IPO.

• Bears QB Jay Cutler: torn groin (ouch!) (four-plus weeks). Josh McCown was shockingly serviceable in relief duty, tallying 15 fantasy points and an impressive QBR of 94.6. Sadly, McCown can’t play the Redskins every week, so we’ve likely seen the pinnacle of his season. As such, anticipate an uptick in single-digit outings for Jeffery, and get ready for Matt Forte to eclipse 20 carries for the first time all year.

• Rams QB Sam Bradford: torn ACL (out for the year).

• Eagles QB Nick Foles: concussion (TBD, though he’s not practicing today). Regardless of Foles’s health, his dreadful play in Sunday’s 17-3 loss to Dallas virtually ensured that Michael Vick will regain his starting role once he’s fully recovered from his hamstring injury. That could be as soon as Week 8’s tasty matchup with the Giants, though we’ll have to wait and see. Needless to say, Andy Reid is SUPREMELY happy that he doesn’t have to deal with this drama anymore.

• Way to Not Instantly Give the Other Team Six Points, Buddy: Normally a 15-of-25, 271-yard, one-touchdown game wouldn’t merit attention here. This section’s purpose is to highlight the most spectacular and tragic performances of the week, and Case Keenum’s debut falls smack-dab in the middle of both extremes. However, there’s a compelling argument that Keenum’s seemingly average numbers were quite spectacular when judged against Matt Schaub’s, whose pick-six streak was basically a sentient parasite blighting the Texans organization. If Keenum provides dependable, relatively turnover-free production, that’s pretty much all an Andre Johnson owner can ask for at this point. And of course, fewer turnovers means more opportunities for Foster and Ben Tate.

Naturally, Gary Kubiak isn’t committing to Keenum as Houston’s starter just yet, because Kubiak doesn’t like to make decisions that help his team win. Still, higher powers are firmly on Keenum’s side.

• Matt Forte Will Break Your Ankles:

Aside from Jamaal Charles, there’s not a single running back for whom I’d trade Forte. By consistently augmenting his rushing production with four-plus receptions per game, he seems utterly incapable of experiencing a down week. Conversely, essentially every other top back — LeSean McCoy, Adrian Peterson, Marshawn Lynch, Knowshon Moreno, and Reggie Bush, among others — has delivered at least two games of single-digit fantasy points. Forte? None.

• For Once, Mike Shanahan Isn’t the Bad Guy! Look, I’m an Alfred Morris owner, and even I can’t hate on Mike Shanahan for Roy Helu’s 22-point bonanza. Morris nearly doubled Helu in carries and amassed 54 more rushing yards (95 to 41), yet failed to reach the end zone despite his offense scoring 45 points, which might be the unluckiest showing of the 2013 fantasy season. I won’t call Helu’s three-touchdown game a complete fluke — Christopher Harris wisely attributes it to the increasingly fast-paced nature of Washington’s offense — but we can reasonably expect Morris to outshine Helu in the future.

Despite poor showings from Gio Bernard and Reggie Bush, Bengals-Lions was incredibly heartening for two receiver-related reasons: (1) It gave owners hope that Andy Dalton won’t completely wreck A.J. Green’s season; I mean, check out that pristine 92.8 QBR! And (2) it proved that defenders can stop Megatron from Megatronning for only so long.

• Flexy and I Know It: Rex Ryan must be a Buddhist, because the fifth noble truth holds that the less Bilal Powell there is in our lives, the better. Without warning, Powell’s workload plummeted over the past two weeks, and Chris Ivory’s 34-carry game against the Patriots basically confirms that this trend will continue. Don’t get me wrong: Ivory is equally unglamorous, and he’s only viable as a deep flex play, but at least there’s some clarity in the Jets’ backfield.

The barely owned players worth targeting this week.

1. WR Percy Harvin, Seahawks (available in 77.2 percent of ESPN.com leagues): He’s actually practicing, and he might even play on Monday night! While it’d be silly to expect immediate top-flight production from Harvin, we are talking about a guy who was wildly successful with Christian Ponder as his quarterback. Harvin could conceivably be posting WR1 numbers by season’s end, so he’s worth your top claim regardless of his playing status in Week 8. To those of you who boldly nabbed Harvin with a late-round draft pick and never let go: congratulations.

2. RB Zac Stacy, Rams (89.8 percent): Remember, Kellen Clemens versus the Seahawks is a one-sided matchup for the ages. The Rams don’t have a prayer here, but if they did, it would entail a Herculean effort from Stacy. He’s a better option for the RB-needy fantasy owner than, say, Peyton Hillis or Joseph Randle, because his value isn’t inextricably tied to the health of another player.

Given Fred Davis’s impending exile from Washington and the team’s relatively weak receiving corps, there’s reason to believe that Reed will continue to be a focal point of the offensive game plan, especially since the Skins actually won on Sunday. Moreover, it doesn’t hurt that Washington’s next four tilts (at Denver, vs. San Diego, at Minnesota, and at Philly) all come against deficient pass defenses.

4. WR Jarrett Boykin, Packers (98.4 percent): James Jones’s imminent return shouldn’t scare you away from Boykin, because Aaron Rodgers is like the kid who’d always win the sportsmanship award on your youth basketball team: He likes to get everybody involved. Additionally, Boykin might be flat-out better than Jones, who’s always struck me as someone who’d be mediocre on almost any other team.

5. WR Harry Douglas, Falcons (62.3 percent): Matt Ryan has to throw to someone, right? I guess that was the overarching lesson of Falcons-Bucs, which saw Douglas haul in seven receptions for 149 yards and a touchdown. I’m not bullish on his actual ability — almost all of his production came in the first half, meaning Tampa adjusted to him rather easily — but he’s WR3 material until Roddy White returns. Even #competitivegurus can’t overcome a high ankle sprain.

Last week’s message was simple: If it feels wrong, do it anyway. After all, the craziest strategies are often the most successful, and what’s there to lose at 1-5 or 6-0 anyway? So send a hearty salute to @KingMathSwatter, who overhauled his team in virtuosic fashion and was repaid in kind by the fantasy gods. If any of you can top this in Week 8 (I don’t see how that’s possible, but it can’t hurt to try), I’ll be sure to include the best screenshot in next Tuesday’s column.

@mattborcas If it feels wrong, do it anyway. Overhauled my team after an 0-6 start. pic.twitter.com/REOdIVn5VS

7-Day NBA Warning: All Mr. Softees Are on Notice